Global climate change often tops the national and international news, most recently as a cause for the Syrian War and in the shape of a snowball landing with a thud on the U.S. Senate floor. Whether you believe global warming to be a myth or reality, the issues around climate change have taken the world stage. KWHS talks with high school students who recently researched and debated the issues at the World Affairs Council Philadelphia's International Climate Summit. …Read More 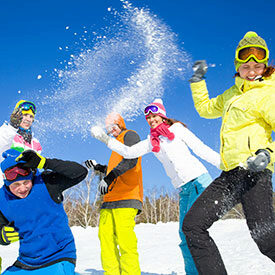 If you live in the colder climates, then you’ve hurled your share of snowballs this winter. Boston, Mass., for instance, is digging out from more than 100 inches of snow this season. Chances are, though, that none of those snowballs has had quite the impact as the one thrown onto the Senate floor late last week by Sen. Jim Inhofe. Yes, he threw an actual snowball. The basic purpose of his snowy spectacle was to say, “Look, we have lots of snow. How can global warming possibly be real?” Inhofe, a devoted climate-change denier, said, “We hear the perpetual headline that 2014 has been the warmest year on record, but now the script has flipped and I think it’s important since we hear it over and over and over. As we can see with the snowball out there, this is today. This is reality.”

Maybe you’ve wondered the same thing. A brutal winter with lots of snow and ice hardly suggests that the planet is heating up. Or does it? Inhofe’s snowball stunt has come under fire, largely because many believe that it misrepresents the science behind global warming. Global climate change (aka global warming) is much more about extremes than it is about rising temperatures, experts say.

Climate change refers to the changing weather, including patterns of temperature, precipitation, humidity, wind and seasons. According to the science behind it, climate patterns play an important role in shaping natural ecosystems and the human economies and cultures that depend on them. Reports like Washington State’s “Preparing for a Changing Climate” note that rising levels of carbon dioxide and other heat-trapping “greenhouse” gases in the atmosphere (think the exhaust emitted by vehicles and factories) have warmed the Earth and are causing significant problems like rising sea levels and more extreme storms – even of the snowy variety. After Inhofe’s speech, Sen. Sheldon Whitehouse, a strong environmental advocate, countered by saying: “You can believe every single major American scientific society, or you can believe the senator with the snowball.”

Global warming continues to be a political hot-button issue, even as the science behind it makes the headlines, most recently for causing California’s severe drought and influencing the start of the Syrian War. The United States is leading global efforts to address the effects of climate change under the guidance of U.S. President Barack Obama, who has said, “I refuse to condemn…future generations to a planet that’s beyond fixing.”

Clearly, this topic that affects business, economics and humanity is on the minds of today’s teens – and must be addressed on a global scale. KWHS recently spoke with high school students participating in the World Affairs Council’s International Climate Summit, held at Temple University’s Fox School of Business in Philadelphia. Representing advanced, emerging and developing economies, as well as intergovernmental organizations, student delegates convened to draft a legally binding, universal agreement aimed at reducing global greenhouse gas emissions by 2050. Here are some of the insights of these young leaders:

On the importance of the issue…

“I became interested in climate change after my travels to Malawi, Africa, this past summer. My coordinator pointed out to me how climate change could be devastating for a country such as [Malawi, which] is completely dependent on agriculture for its economy to run. I became interested in learning more. I realized that as a member of a global community, it was my responsibility to take steps toward doing something about [how my country and I were contributing] to climate change — and what we could do to mitigate it. Every action we take affects someone somewhere else in the world.” -Kareema Dixon, senior, William W. Bodine High School for International Affairs, Philadelphia

“When you look at climate change through a certain country’s view, you realize why they do the things that they do, instead of just mimicking others. Every country is different, from varying economies to cultures and capabilities. When looking at conflicts like climate change through the global lens, you realize that countries do the things they do to accommodate their needs. Some things that are beneficial to one country might greatly hurt another. For example, agreeing on a carbon-tax proposal [a tax levied on the carbon content of fuels] would not help India at all, but rather it would be costly for India due to the vast amounts of Co2 it produces. However, a country like Belize would probably not have a problem [with a carbon-tax proposal] because it does not produce nearly as much Co2.”  – Merlin S.K., sophomore, Upper Darby High School, Upper Darby, Pennsylvania

On the value of considering the global perspective…

“When students come together [in a summit like this] after researching for hours about the country that they represent, those students begin to form a more comprehensive insight of another country’s ideologies, cultures, religions and economic make-up. This is so valuable. Often students, especially in America, become too focused on Republican and Democrat, or incessantly believe that the United States is the most advanced, or simply the best country in every aspect. That could not be farther from the truth. Although our country has established one of the most effective forms of government that is revered around the world, our country is becoming a corporatocracy, an economic and political system controlled by corporations or corporate interests. We are increasingly hearing the voices of American companies instead of those of the citizens. That is one of the many factors contributing to why we silently watch as our atmosphere becomes [more] polluted and why we fail to [make] progressive strides to reduce our negative effects on the environment.” – Noor Chaudhry, senior, J.R. Masterman, Philadelphia

On spreading the word…

“It is important that everyone is shown the scientific evidence. Unfortunately, many people still believe global warming to be a myth. The startling truth is that it is far from a myth. I would hope that my peers would take steps to properly educate those around them about climate change. I would also like to see more of my peers becoming involved with the political side. Politicians care about what their followers care about. If we can educate people and get them to care about climate change, we can then get the politicians to have a stronger desire to make a difference. My peers from all across the globe can help make these things a reality without too much effort or time if we all work together. This threat is real, and if everyone is educated…then I believe we have the power to save the environment.” -Helena Boody, senior, Haddon Township High School, Westmont, New Jersey

What point was Sen. Jim Inhofe making when he threw a snowball on the Senate floor? Was he making a valid argument? Why or why not?

What is a corporatocracy? Do you agree with Noor Chaudhry’s perspective? Why or why not?

What is gained by looking at an issue like climate change through a global lens? What do you learn about the nuances of such a complex issue?