The Migration Crisis and the Future for the European Union 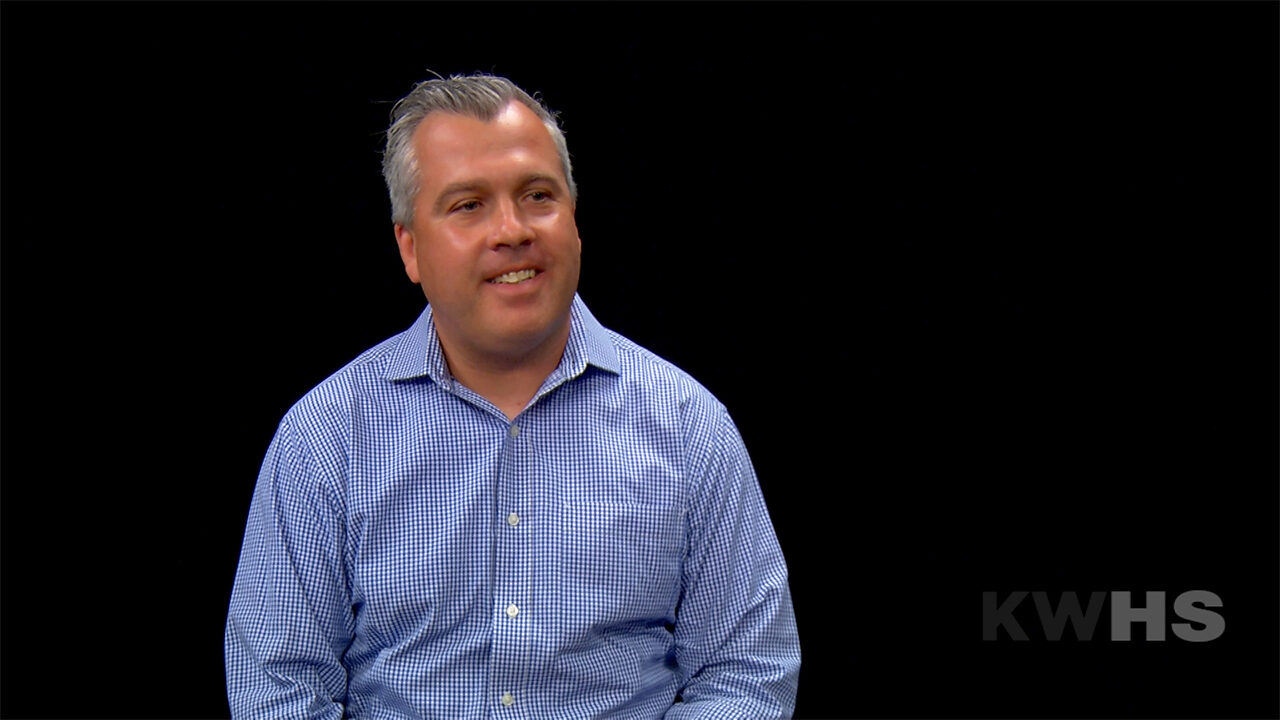 During the last week of July, 2016, some 35 high school students from Philadelphia and the surrounding areas traveled to Wharton’s Huntsman Hall for the 2016 Summer Global Leadership Seminar organized by the World Affairs Council (WAC) of Philadelphia, in partnership with Knowledge@Wharton High School (KWHS).

Right before the kick-off of the week-long program, KWHS interviewer Julia Drake, a junior at Hopewell Valley Central High School in New Jersey, sat down with Ned Hawkins, director of student programs at WAC, to discuss this year’s seminar topic: The migration crisis and the future for the European Union. Here, Hawkins discusses all aspects of the mass movement of millions of people into Europe, also considered the worst humanitarian crisis that Europe has faced since the end of World War II.

Knowledge@Wharton High School: Ned Hawkins is the director of student programs at the World Affairs Council of Philadelphia. The topic of the council’s 2016 Summer Global Leadership Seminar for high school students is “The Migration Crisis and the Future for the European Union.” In the weeks leading up to the seminar, Ned has studied all aspects of the crisis. Today, he is going to help us understand it better. Hi, Ned, thanks for joining us.

I thought a good place to start would be — what exactly is the migration crisis?

Ned Hawkins: What we are talking about is the mass movement of people into Europe. And this situation is on such a scale [that it involves more than] a million migrants who have flowed into Europe. It’s created a situation that is the worst humanitarian crisis Europe has faced since the end of World War II. What the situation has entailed is the movement of migrants who are either fleeing persecution, war or violence, or migrants who have chosen to go to Europe for economic reasons. And this has challenged European governments and has also challenged a lot of the pan-European laws and systems in place to handle refugees.

KWHS: What are some of the potential challenges, risks and rewards for migrants making the journey to Europe?

Hawkins: The journey itself is tremendously risky. When you hear the stories from the migrants themselves, this is a traumatic experience for everyone. The journey is on foot. You’re involved with transportation that is on a need-basis. You might be on a train, you might be on foot for thousands of miles — it’s unpredictable. You are also dealing with crowded and overcrowded refugee camps. Criminal gangs have taken advantage of the refugees. Being robbed is definitely a big risk.

Also, the refugees or the migrants are actually very vulnerable. They have a goal in mind. And they’re being taken advantage of a lot of times by human smugglers and human traffickers. When you get to Europe itself, the challenges aren’t over. [You face] challenges in regards to integrating into society. If you do make it to Sweden or Germany, [you have to find work] and adjust to a whole new culture and a whole new setting. A whole new environment is a big challenge. Certainly, the reward would be [that] if you are fleeing violence or war, you are [moving to a] safe, stable place [like] the European member states. If you’re an economic migrant, the European member states are providing a higher standard of living. That is certainly a reward for the journey.

KWHS: Do you have an example of a real migrant story to help illustrate the experience?

Hawkins: I do. There are so many horrible stories, and rightly so. As I mentioned, this is a journey that’s full of a tremendous amount of risks and is traumatic for many. A focus in a different direction is the story of Mahmoud Bitar, a Syrian from [the city of] Aleppo who made the journey to Sweden (use the sidebar to navigate to Related Links for more information on Mahmoud). It took him more than three years just to get into Greece, which would be the entry point into the European Union. It took him a tremendous amount of back and forth, to Lebanon and Egypt, back to Lebanon, back to Egypt to Turkey and finally, he made his way to Greece and is now living in Sweden.

I think what’s really interesting about his story is that he has become a star of social media and has used Facebook and various forms of social media to show the integration process and the challenges of being a refugee in Sweden, and what it’s like to integrate into Swedish society. He does this with a real sense of humor. When he left Syria, like many Syrians, Sweden was the land of milk and honey. He thought he would have a new car, a new house. The reality isn’t such. He talks about the challenges of integrating.

Like, when you live in Sweden and you have 20 hours of daylight and during Ramadan [a time of fasting for Islamic people], you need to fast during the day and then you get to eat at night. And 20 hours [of fasting] is not what he was accustomed to when he was living in Syria. He does this with a real sense of humor, and [he is] a young person who has used social media to tell a story.

KWHS: Can you help us better understand the response of the E.U. states to the crisis? Why are some welcoming while others are closing their borders?

Hawkins: That’s a great question. The European Union overall, the 28 member states, do have certain regulations — in terms of handling migrants and asylum-seekers and refugees. That’s under the Dublin Regulation. Although through some leadership provided by Germany and other member states, largely the response has been not a pan-European response, but more so of the 20 different member states responding to the crisis. Germany and Sweden [are] good examples of countries that have been fairly welcoming to the refugees — and then, you have states like Bulgaria or Hungary who have not been as enthusiastic towards welcoming and integrating the refugees into their countries.

A lot of that boils down to geography. Some countries are more on the front lines of the crisis. Certainly Bulgaria sharing a border with Turkey — Greece, Italy and Hungary. These are all countries that are, for lack of a better word, being overwhelmed by the crisis. And then the second piece would be economics. The economic situation in Bulgaria [and] Hungary isn’t the same as Turkey or France. These countries don’t have the same amount of resources economically. And this presents a real big challenge for a country that might [already] have economic difficulties.

On the other hand, for a country like Germany or Sweden, this is an opportunity, perhaps, economically. Germany is a good example of [a country that has] a low birth rate. There is a need for migrants for economic purposes. So Germany has been very welcoming. And there is a lot of argument that this may, down the road, be an economic benefit for a place like Germany or Sweden. You [also] have politics and history that factor in. Certain countries have political parties that might be anti-European or nationalist or xenophobic, in a lot of cases. Of the 28 member states [in the EU], the history can be quite different, and the experience.

KWHS: So to touch on that again, what is xenophobia? And do you think the crisis will transform these countries?

Hawkins: Xenophobia is the fear or hatred of foreigners or foreign cultures or foreign religions. Xenophobia has, unfortunately, been part of this crisis. In almost all of the E.U. member states, you are seeing nationalist, populist parties [who are against outsiders coming in] gaining momentum. These aren’t parties that necessarily I would say are going to take power. In some cases, that is a potential. These parties aren’t new, either. They have been in existence for quite some time. And the [migration] situation fuels their message, unfortunately.

[The migration crisis] will certainly transform E.U. member states in the short-term politically. You are going to see a reaction based on people’s fears, in some cases. Public opinion is kind of split on how to deal with this crisis. So you are going to see this in the short-term. In the long-term, that’s a good question. It really depends on how the crisis pans out. This is kind of a moving target. It changes quite rapidly. And you know, last year in 2015 during the summer, we had close to one million migrants.

This year, we’re starting to see some of the controls and some of the successful and effective management of the situation. This year so far, we’ve only [had] a quarter of a million migrants come to Europe. That’s slightly down than the situation that was presented the year before. One guaranteed long-term effect [is that] a lot of European member states are going to be culturally diverse and they are going to have religious diversity that they didn’t have 10 years ago or even two years ago. A lot of refugees or migrants are going to choose to go back [to their home countries], but a lot are going to choose to stay. And that’s going to change the demographics in Europe.

KWHS: How do you think many of these issues will be resolved in the future?

Hawkins: That’s also a million dollar question; a hard question. As I just mentioned, this is a moving target. Just to boil it down to some concepts – it’s certainly going to take management of the crisis. In 2015, this should not have caught European governments by surprise, but I think they were more reactive [than proactive] to the issue. Member states and the European Union [need to take initiative] to manage the refugees and the migrants coming into Europe. It’s going to take cooperation amongst the E.U. member states to find a way to solve the issue. Certain countries are bearing the burden, and they’re on the front line, [including] Greece, Bulgaria and Italy. It’s going to take cooperation across all of the European Union’s member states.

What are some of the main reasons that refugees are leaving places like Syria to travel to European Union countries like Germany?

Who is Mahmoud Bitar? Why is his story particularly compelling?