‘Tis the season of dresses, tuxes and stretch limos. Proms are a $2 billion-a-year business that some suggest reflect teens’ trend to spend. Whether you opt for a $400 dress or more affordable fashion, it comes down to your perception of the price tag for high school’s biggest party. …Read More 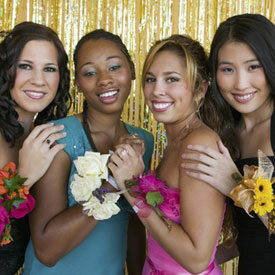 She didn’t think of prom as a big deal until she picked out the dress. That is when Miriam Smerling, a senior at Hatboro-Horsham High School in Horsham, Pa., truly felt the power of prom. “Other than your wedding day, unless you have other cultural celebrations, this is it. Maybe that’s why it has turned into such a big night of consumption,” says Smerling, who attended her senior prom at Normandy Farms, a country club in the suburbs of Pennsylvania, on May 20. She spent just under $100 on her dress and $180 on tickets for her and her date, a steal by most accounts for prom spending.

High school proms can reflect teens’ attitudes toward spending – which many believe have trended toward lavish in recent years. After the dress, venue fee, dinner and tux rental, you still have to consider the limo, after-party, beauty products and salon fees – costs that can easily reach several hundred dollars. Despite the recession, it’s a $2-billion-a-year business, Jennifer Maguire, public relations director of Seventeen magazine, said in a New York Times article. ”Prom has become bigger and bigger. Girls are shopping as much as three to four months in advance.”

Take for example, this year’s opulent prom themes at Downey High School and neighboring Warren High School, both in the Los Angeles suburb of Downey, Calif. Downey’s prom was held on May 13 at the Globe Theatre at Universal Studios, complete with a red carpet and the theme “Vintage Hollywood.” Warren’s prom, on May 21, took place on Inspiration Yacht with the theme, “Oh, the Places You’ll Go,” with each level of the ship decorated as a different city: New York, Las Vegas and Paris. A recent article in Baltimore, Md.’s Jewish Times describes how high school senior Danielle Rothouse spent months planning for her prom this May, including finding the perfect dress, only to return it and continue her search when she discovered on Facebook that several friends had purchased the same style.

Is it possible to celebrate without succumbing to extravagance? In fact, cautious consumerism may be more the norm than reports of prom excess suggest. For instance, resale shop owners this season tell about lines out the door of young women looking for deals on prom dresses. And if fashion magazines both set and reflect the trends, then affordable style is in. Noel Duan, a sophomore at Columbia University and current intern with Vogue and Teen Vogue, worked on Seventeen Magazine’s prom spread last spring. “Magazines offer affordable options for prom dresses,” she says. “Teen Vogue issues from five years ago were profiling stylish vintage prom dresses that ranged from $5 to $50. You may see dresses for $300 to $400, but the outrageously expensive gowns are not what you find in magazines.” Shows like MTV’s “My Super Sweet 16” and “Rich Girls,” which are all about shopping sprees and high price tags, she says, are not indicative of the typical teen lifestyle.

James Seifert, a student at The Harker School, a high school in San Jose, Calif., opted to drive his date to this year’s prom rather than rent a limo. “The focus is supposed to be the actual dance, not how you get there,” says Seifert, who spent $135 on the tux rental and caught an early bird deal on prom tickets for $85 each.

From Conventional to Conscious

One organization has been motivating high school students to rethink how much they spend on their proms. Erin Schrode started San Francisco-based Teens Turning Green in 2005. Schrode, currently a junior at New York University, was a senior in high school when she started the Whole Foods-sponsored Project Green Prom campaign, an offshoot of Teens Turning Green.

“Our campaign is about individual action, things you can do in your life that make a difference,” notes Schrode. “The [green] prom focus has the message: ‘OK, make this change for one night and maybe you’ll incorporate it into other aspects of your life.’ You can actually do [prom] in an eco-friendly way: Reuse dresses and rethink transportation, maybe decide against the stretch hummer limo, or take a party bus that runs on bio-diesel. Think about how much is wasted at prom. Instead, you could have organic food and make really cool bouquets with home flowers. We want to show how one night can turn from conventional to conscious.

Schrode observes a shift taking place in young people’s perceptions of consumption. “With the economic downturn, everyone is a little pinched. I don’t think that prom has to be an opportunity to spend as much as possible.”

In the end, prom spending is an individual choice fueled by people’s ideas of how significantly money defines the perfect prom experience. Says Hatboro-Horsham’s Smerling: “It’s the last big event before college, and people will pay the money for one night of fun before starting a new chapter in their life. It’s a time of transitions and a celebration of endings and beginnings.” And her dress? An elegant floor-length, black satin, one shoulder sweetheart number with sequins scattered on the bodice.

2 comments on “How Much Did You Spend on Prom?”