NFL Linebackers in Somalia: The Socially Responsible Side of Sports

The sports business is not only about winning on the court or field, it is also increasingly about doing good in the community and the world. Speakers at the 2011 Ivy Sports Symposium, held at Wharton in November, discussed ways that athletes and teams are using their passion for the game to address global and economic issues. …Read More 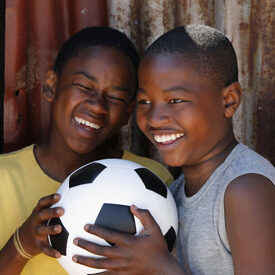 Mori Taheripour, a senior advisor for sports development at USAID, a government agency that offers economic and humanitarian assistance around the world, recently recruited a few National Football League (NFL) players to do public service announcement spots for USAID, particularly about the political and economic struggles in Somalia and neighboring countries. Ray Lewis, a Baltimore Ravens all-pro linebacker, told her he was happy to do the spot, but he would really rather go to the Horn of Africa and see what was going on, to better understand what he would be talking about.

“Athletes have a unique and powerful position to influence people,” said Taheripour during a panel on Sports & Social Impact at the 2011 Ivy Sports Symposium at Wharton in November. “There are so many more who will help if we can tap the passion they have for sports and educate them. Ray didn’t know there was a crisis there, but as soon as he knew, he wanted to do what he could to learn about it.”

A Driver of Revenue and Reputations

Kathleen Behrens has a unique job  — executive vice president for social responsibility and player programs for the National Basketball Association. Just that a job like that exists, she said, shows that the NBA takes its mission to do good seriously. “Everywhere we go to grow the game all over the world, we want to integrate our social responsibilities, too,” said Behrens. “It is part of our business not only to be a driver of revenue, but of reputations.”

Behrens said that the league and its players were especially keen on the clean up in New Orleans after Hurricane Katrina, since there had been a franchise there. The league moved its all-star game to the city and did humanitarian activity during that time with players to bring attention to the needs of people in the aftermath of the storm.

More and more, panelists said, sports are being used as a way to spread everything from messages about equality, to civil rights, to eradication of disease and obesity through athletic participation, to players using their celebrity to spotlight global problems.

But it is not just star-spangled TV events that do the job, said Jack Brewer, a former NFL player whose Jack Brewer Foundation helps athletes get connected with charitable causes. He pointed to two players who were drafted into the NFL this year, but who weren’t able to sign contracts because of the pre-season lockout. He decided to pay their way to see the devastation still affecting Haiti after the 2010 earthquake there. “Now when they sign their contracts and have a lot of money, they will know what the other part of the world looks like and [will be] willing to help,” said Brewer.

The panelists warned that sports should not be used as a panacea to solve social problems. There has to be a reason to be there, said Brendan Tuohey, executive director of PeacePlayers International, whose mission is, in part, to use sports to promote peace in torn places like the West Bank, Cyprus and Northern Ireland.

According to Tuohey, communities must feel ownership of the projects meant to help them. All the money for sports that is invested in a place like the West Bank won’t work, he said, unless the people who live there are willing to support it long-term. His organization promoted a soccer league in the no-man’s land between Turkish and Greek enclaves in Cyprus that involved children from both sides of the country. Sports became their unifying dynamic. “It is a mistake not to be on the ground,” he said, noting that his organization is careful to have partnerships with local administrators and community leaders to build trust and nurture communication.

Eric Dienes is the liaison officer for the office on sport and development for peace at the United Nations, which does peace and humanitarian work around the globe. Sports, he said, is a relatively new approach for the UN to use in its missions, but it has been particularly effective in recent years because it is apolitical. Even so, it can then be used to lay the groundwork for political change.

“Governments can change quickly, but we can work with local actors for sustainability,” said Dienes, stressing that sports can bring young people from different cultures together, forming the basis for future peace. “Indigenous groups of all kinds play sports. When we get them to play together, we can change lives.”

Innovators Must Master the Art of Brainstorming