The Right Stuff: The Science and Business of Space Nutrition

A team of high school innovators from Pittsburgh won a top prize for their space-aged fertilizer system and learned valuable business lessons, like marketing and commercialization, along the way. As they head to college, the entrepreneurial scientists say they are fortunate to understand the economic realities of the work they do in the laboratory in their quest to solve real-world 21st century problems.…Read More 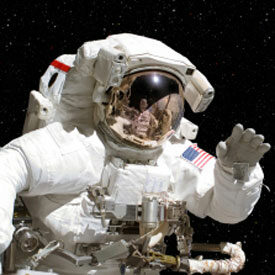 Five high school seniors in Pittsburgh spent much of their 2010-2011 senior year trying to figure out how to turn trash into food. They ended up with not only an out-of-this-world product, but also a business plan for how to turn their idea into an earthly reality.

The students at Upper St. Clair High School won the Conrad Foundation’s annual Spirit of Innovation Award – and the title of Pete Conrad Scholars in Aerospace — for their design of a system that allows waste products created by astronauts to be recycled into fertilizer for growing fresh food and to produce oxygen. The device uses a biochemical process to take in carbon dioxide and waste and convert it into oxygen and a soy-like food product. It composts the waste into a fertilizer, which is then used to grow a food crop. The system, which they have called a perpetual harvest space nutrition system, would be used on long-distance space flights, such as trips to Mars.

Mars, Antarctica and the Third World

But being science whiz kids isn’t enough to win the Conrad Foundation’s top prize. The contest, run by an organization named for astronaut and innovator Pete Conrad, gives high school students the opportunity to design, develop and commercialize new products. It calls for high school students to not only invent products for space exploration, but to develop a business plan for their ultimate use.

That’s where Team Ouroboros made it work. The members — Avisha Shah, Kate Groschner, Yudi Chen, Matthew Vernacchia and Brent Heard — not only had the right stuff for the science portion, but they became experts at developing and pitching a business plan, too. “Most of us didn’t have that background,” Vernacchia says. “We all did a lot of learning about how to create a business plan and present it.”

After the team members found out that they were finalists in the contest, they headed to Palo Alto, Calif., to compete in a May summit against six other aerospace teams from across the country. They had to show how the science would work and pitch their business plan, too.

Based on watching other teams’ presentations during the summit, the members of Ouroboros say their business expertise helped them prevail. “It definitely gave us the edge,” Shah says. “The science and the engineering are very important, but if you don’t know how to market [your technology] to people, there’s very little use to the science. You need to spread the word.”

The team gave the judges two uses for their system. The first was for space flight, where its recycling process could be used by organizations like NASA to cut down on food supplies required for space missions; the second was to use the device in areas where crops and food supplies are short, such as Antarctica or poorer countries. “Since this product has a definite third-world application, that would serve as our testing ground,” Heard says. “One of the interesting things we found out was that NASA tests in the third world a lot, too, so we felt that would be cost-effective for us.”

‘Business Can Be Blurred with Any Field’

Although Heard and Shah had the most business background on the team, all five members collaborated on both the science and the business. “I didn’t really have a lot of background in business, so this was a great [way] to expand my horizons and see what entrepreneurship is all about,” Groschner says. “The summit opened my eyes to that whole area.” Adds Shah: “I was [amazed] by the possibilities of going into both business and science. Business can be blurred with any field in life. It’s important to know about that, and I’m very lucky to gain such insight into that blend. It has helped me shape my future.”

Winning the top prize came with a $5,000 grant to conduct scientific tests over the summer to prove that the science behind the perpetual harvest space nutrition system is sound. Once the team members have good data in hand, they can start approaching investors to help them get it built and do more tests.

Even though the five are going to college in the fall, they all say they are going to continue to pursue their science entrepreneurship project. Three of the students will be attending Carnegie Mellon University in Pittsburgh, so they will be able to meet in person to work on the business development. Vernacchia is headed to MIT and Shah is going to the University of Pennsylvania, but both say they will make the project a priority.

The team members are mostly planning science-based careers, but they all agree that the contest taught them how important it is to understand the economic realities of the work they do in the laboratory. Even science costs money after all, and the cash for test tubes and microscopes has to come from someone who is willing to pay.

“I just didn’t understand how business was a part of the science community,” Chen says. “It basically runs the science part, but without the science, the business would drop off. If I want to work on some sort of science project, I have to be prepared for the business aspect, too.”

The Value of Intellectual Property