Think an American Express credit card is only for the rich? Think again. High school senior Wendy Huang visited AmEx this summer and learned a thing or two she won’t soon forget from Alpesh Chokshi, the company’s president of global payment options.…Read More 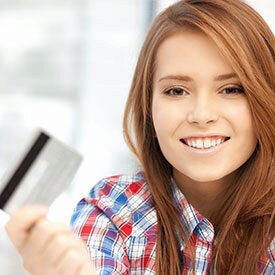 Wendy Huang, 17, is a senior at St. Paul’s School in Concord, New Hampshire. Huang traveled to Manhattan this summer as a student in Wharton’s Leadership in the Business World to visit the headquarters of American Express, a publicly traded financial services firm with a big reputation in the credit card industry. What she discovered high atop Three World Financial Center were values and services for people who don’t necessarily have thick wallets.

This summer my family climbed into our SUV and drove down to Reston, Va., to see my brother Bob off on his first job. Straight out of Dartmouth with a major in economics, he had nothing for his apartment save a sleeping bag, a 50-inch television, five boxes of Lucky Charms and a six pack of Heineken. He finally decided to graduate from a sleeping bag on the floor, so my whole family went mattress shopping. Here’s where his newfound independence took a big step back. My brother had never had a credit card, either in his own name or under my parents’ names, and therefore has no credit with which to make substantial purchases. Instead, my dad handed over his signature blue box American Express (AmEx) card and paid for my brother’s new bedding.

Just like my brother, millions of adults can’t afford or don’t have formal check and credit banking services. Beyond lack of credit, they are literally unbanked, meaning they don’t even have a bank account to save and/or invest their money. That is why AmEx, a multinational financial services company that is high profile in the U.S. for its popular credit card services, is changing the face of modern banking by introducing new methods of payment that fit the working class. AmEx is well known for its branding. Associated with adjectives such as ‘exclusive,’ ‘high-class’ and ‘privileged,’ AmEx has traditionally been the credit card of choice for the upper class. With this new face of AmEx, changes are occurring within the company. This summer, I visited AmEx’s headquarters in New York City and spoke with Alpesh Chokshi, the company’s president of global payment options.

Chokshi is leading American Express’s transformation to begin serving people who don’t necessarily have substantial bank accounts. Much of his time is dedicated to reaching out to the 2.5 million adults in the world who, like my brother, cannot access their own credit card. Finding a solution to the problem is no easy feat, and getting the right people to work toward this goal is even harder. According to Chokshi, his biggest challenge is “finding talent that understands how the new generation thinks.” Specifically, Chokshi shared that he looks for individuals who understand three fundamental principles, also dubbed as “Chokshi’s School of Reality.” They are:

Make a difference: Chokshi is the driving force behind American Express’s newest card, Bluebird, which is marketed with Wal-Mart. Bluebird, an alternative to debit and checking accounts that helps consumers better manage and control their everyday finances, serves the population of unbanked, under-banked, unhappily banked and no-credit consumers. AmEx recognized a problem and launched Bluebird as the solution to address it. While AmEx’s goal is still to make money off these types of services, Chokshi stresses the importance of “profit for a purpose.” He says that earning the paycheck is easy; the hard part is solving the problems faced by the next generation.

WDYWFY: Chokshi’s second lesson from his ‘School of Reality’ is to constantly ask, “What do you want for yourself?” In the short term, many people seek to have a stable job, a satisfactory paycheck, bonuses and so on. But Chokshi stresses the importance of truly finding what you want from life. Not too long ago, Chokshi had to address this question himself. With two young children, he realized that, while he loved working in financial services, he wanted more time to spend with his family. He proposed a new plan to his boss that allowed him to go to work early and leave early, a request that his boss readily accepted. Chokshi urges us, as growing students and workers, to find what we want for ourselves and understand the broader goals in life.

EQ over IQ: Finally, Chokshi highlights the value of EQ, or emotional quotient. Emotional intelligence measures an individual’s ability to handle himself or herself and the people around him or her. While IQ, or Intelligence Quotient, is important, EQ matters more, he says. Chokshi even goes so far as to say, “Success in business depends on someone’s emotional quotient.” The relationship between EQ and leadership is linear. As someone’s emotional quotient goes up, so, too, does the ability to lead. Individuals who show a high emotional quotient are able to better understand and draw out the best in people. Chokshi says, “IQ is expected — it gets you in the door. EQ gets you up [the ladder]. The earlier you know this, the better.”

After this visit to AmEx, I feel I understand my financial path better – as well as some key tenets to business success. I know that I’m going to get a head start and begin building my credit. The Credit Card Act of 2009 maintains that a person must be 21 years old to get a credit card, unless an adult co-signs for the credit card or the individual produces proof of sufficient income to repay any loans. I think it’s time I talk to my dad about helping me get my own signature blue box.

Who is Alpesh Chokshi? What is ‘profit for a purpose,’ and why does he stress it?

Take a moment to consider “WDYWFY.” List three personal goals and discuss with a partner how you might achieve them. Compare and contrast: Are your goals similar or different from those of your partner? Does that say something about your values and interests?

What is the difference between EQ and IQ? What does the importance of EQ say about workplace skills like teamwork, communication and the ability to listen? What additional skills will help you develop your EQ?