Next time you post on Instagram or lose it over a YouTube video, consider the technology behind these essentials of daily life. Sarah Friar, CFO of Square in San Francisco, wants to motivate young women around the world – including Australia, which has a shortfall of 37,000 computer engineers – to consider careers in technology and engineering. …Read More 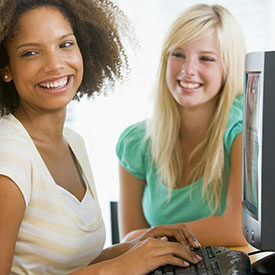 Have you visited Instagram today? How about Twitter, Facebook, YouTube? These days, technology is as essential to your daily routine as eating, sleeping and, well, texting. Funny thing is that many countries around the world are hurting for computer scientists – the people who actually invent, engineer and build the technology that dictates our lives – especially women.

‘Immersing Myself in the IT Industry Network’

This week, the International Business Times published an interview with Sarah Friar, the chief financial officer of mobile payment company Square, who talks about the lack of women in tech and what drew her to the field. Square has just started High School Code Camp at its headquarters in San Francisco to give teenage girls hands-on computer code training.

Sarah Friar’s story and mission to inspire young women technologists is evidence of a growing support network for students around the world like Bernice Chen, 18, from Ravenswood School in Sydney, Australia. Australia is in the grips of a skills vacuum in the field of computer sciences (CS) – the country’s third-fastest growing employment industry – with a shortfall of 37,000 computer engineers expected by 2016. With few students, particularly girls, taking up computer science degrees, those who do choose CS as a career can find themselves in high demand – some joining the industry at salaries of around $100,000 a year.

Chen recently completed a National Computer Science Summer School for high school students at the University of Sydney. “I’ve been increasingly fascinated by the world of computers, programming and IT,” says Chen. “I began to take an active interest, self-teaching via online courses, attending programming workshops and immersing myself in the IT industry network” and making friends with fellow students who felt the same passion.

University of Sydney CS outreach officer Nicky Ringland says the university’s focus is to get students like Chen more involved, earlier. “To do this, we need to give students engaging experiences with what is an awesome career option,” she says. “We tell students that they can do much more than consume technology; they can create it.”

The National Computer Science Summer School includes a live-in, 10-day program; online courses and materials; and a national effort, The Challenge, which helps more than 7,000 students from Australia and New Zealand learn coding and problem-solving skills and compete online in CS projects. “We split them up into groups, and they make social networking sites and collaborative story-writing websites,” Ringland says. “Other groups work on embedded systems projects, such as programming Roomba robots or launching and tracking weather balloons.”

According to Ringland, only 6.5% of senior students who took a software design subject in 2012 were girls, a drop from 7.1% in 2011. “If Australia isn’t producing enough computer science graduates – which it isn’t – we have to look to the lack of girls and women in the field,” Ringland says. “Here in Australia, the percentage of women working in a computer-related field is somewhere between 9% and 20%.”

Ringland stresses that efforts to engage young women in computer science are not just about ensuring that Australia (or any country, for that matter) remains competitive in the increasingly important international intellectual property creation market. “It’s also an issue because we’re discouraging our next generation from one of the most exciting, varied and important professions there is,” she says. “Whether students want to fight climate change, make the next blockbuster movie or unlock the secrets of the universe, they’ll need CS skills. Quite literally, every industry is being changed by computers.”

From the big names of technology to small start-ups, “top CS graduates and engineers are treated like rock stars,” she says. “The perks of being a software engineer are lavish. CS graduates are highly paid, and have excellent working conditions, great career options in almost any field and flexible work conditions. It’s a career that can let you change the world: Design the technology of the future. This is exactly the kind of career we should be encouraging young women” to enter.

In the International Business Times interview, Square’s Friar urges young women interested in science, technology and engineering fields to find opportunities to explore their interests. “A diversity of thought, perspective and culture is important in any field, not just engineering,” she says. “Surround yourself with people who support you and get involved in programs like High School Code Camp and College Code Camp, Black Girls Code and Girls Who Code.”

And the next time you’re on Instagram, open your mind to the possibilities.

Why do places like Square and the University of Sydney create opportunities like Code Camp? What is the value in this kind of experience? Have you had similar hands-on training? Discuss the benefits and disadvantages.

Have you considered a career in computer science? If not, what are the three things that hold you back?

Sarah Friar’s first post-college internship was in a gold mine in South Africa. Research her journey to software CFO. Did she follow a direct career path? What can you learn from Friar’s experiences?

Inside Accounting: ‘There’s Room among the Pencil Pushers for Creative Types Like Me’