Crowdfunding, Creativity and Kickflips Inside a Church in Spain 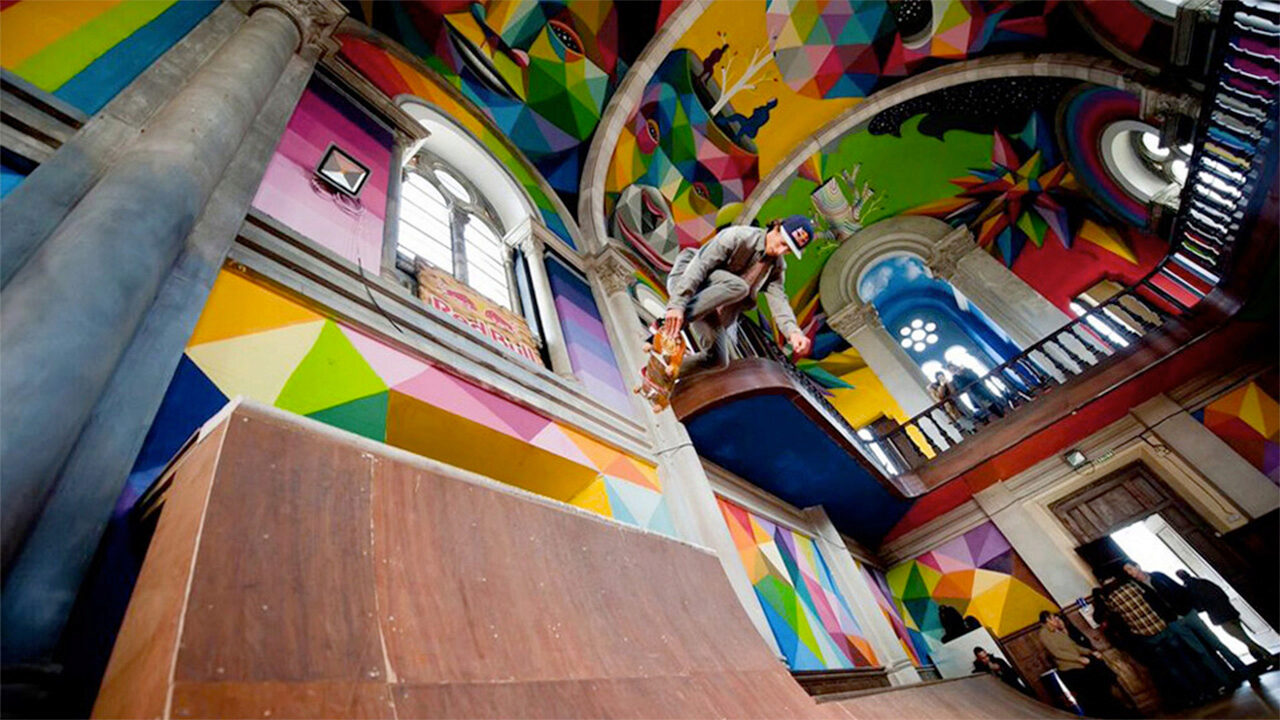 Danny Leon, a 20-year-old skateboarder considered the best in Spain in 2015, recently had an almost mystical experience: He skateboarded inside an early 20th century church whose domes, stained glass windows and walls had just been painted over by Okuda San Miguel, a world-famous urban artist. At the time, Leon told project sponsor Red Bull Spain, “It’s incredible to skate inside. Wherever you look, you discover new shapes, new details.”

The Spanish skateboarder has not been the only one to succumb to the beauty and originality of the so-called ‘Skateboarding Church,’ which is also called Kaos Temple, following the artistic intervention of Okuda San Miguel. All over the world, numerous skateboarders, lovers of modern art and journalists have called it an architectural jewel and the ‘Sistine Chapel of skateboarding.’

What is the story behind the birth of this work of art, which involved enormous amounts of collaboration, both of a personal and financial nature? It is, at one level, a culture-inspired case study into the power of crowdfunding, the practice of creating an online campaign to collect funding from supporters through sites like Indiegogo and Kickstarter. It is also a wonderful crossover between the worlds of art, business and sports.

This particular story of project-based funding that fuses sacred architecture with the more radical vibe of vibrant urban art and skateboarding began in 2007, when a group of skateboarders known as the Church Brigade acquired an abandoned church in Asturias in the north of Spain, and converted it, little by little, into a skateboarding park. Lovers of the sport needed a place where they could give free rein to their passion for skateboarding, while protecting themselves from the nearly 200 days of rain that the region receives over the course of the average year. So the church was deconsecrated, and adapted to the needs of skateboard enthusiasts.

It wasn’t until the end of 2014, however, that Madrid-based artist Okuda San Miguel got to know the place and offered to reinterpret it from an artistic point of view. “I fell in love with it at first sight, the very first time I found myself in the classical architecture of this church,” he says. There was only one problem: The artist and his partners needed more money to transform the Skateboarding Church into the Kaos Temple they envisioned.

Okuda and his creative team, known as Ink and Movement, found a solution, launching a financing campaign through a European crowdfunding, micro-sponsorship platform known as Verkami. Verkami crowdfunding is a “website where artists and creators from all over the world can present their ideas and projects and finance them with the participation of their followers and their fans,” notes Jonas Sala, co-founder of the platform. In exchange, their sponsors – those who make contributions to these projects – receive products and experiences uniquely related to those crowdfunding projects. The word ‘Verkami’ was derived from Esperanto, where it means ‘creation lover.’

Ink and Movement’s Zigor Cavero stresses that the micro-sponsorship process “is a source of financing that is as valid as any other process, and in many cases has more advantages than going to the bank to ask for money or turning to commercial brands that might sponsor you.” According to Cavero, this sort of financing is being used increasingly to promote such artistic projects as Kaos Temple and various musical productions, for example. Outside the world of art, it is also being used for the creation of businesses, the financing of political campaigns and the promotion of social projects.

Conceptually, crowdfunding systems such as Verkami are relatively simple to understand. They are based on rewards, rather than donations. In this system, people give money via the online platform without getting any financial reward in return. Each project has a financing goal and a period of time in which to achieve that goal. Depending on the campaign’s length of operation, there are two scenarios:

In the first scenario, less than the entire 100% of the financing goal has been collected before the deadline. In such a case, the terms of the agreement are annulled and the artist does not receive any money.

In the second scenario, the entire 100% of the financing goal has been reached, or perhaps even more than that amount, before the deadline. In such a case, the artist receives the funds that have been collected via the platform. Moreover, in many cases the platform takes a small percentage of this amount in exchange for its advisory and intermediation services.

At Verkami, Sala says that two fundamental ingredients contribute to the success of this sort of initiative. First of all, “The campaign has to work very effectively because this is about [raising money for] a project that is not yet a reality. That means you have to make your project tangible [to your target audience] by using videos, pictures and detailed explanations of what it involves. You have to convince all of the sponsors that the project is on solid ground, and that the rewards you can derive from your project are attractive.”

Second, Sala notes, the campaign needs a very well-crafted message to reach the public and get people interested in sponsoring the proposal. In the case of Kaos Temple, says Cavero, two distinct types of people fit the objectives of their campaign: On the one hand, some people were primarily interested in the world of skateboarding, while others were fans of Okuda San Miguel and the art that he creates. To incentivize the participation of sponsors, both audiences were offered such rewards as postcards, prints and plates of skateboarding activities designed by the artist.

The campaign’s goal of raising 24,000 euros (about $26,290) was achieved without any major headaches or surprises, and the money was allocated to acquiring such supplies as paint and other art materials, as well as rented equipment that enabled the artist to complete his work. On November 23, 2015, Okuda San Miguel began to paint the church, and it was inaugurated to the public on December 10.

Having undergone this experience, Cavero clarifies the factors most critical in determining whether or not a crowdfunding campaign will succeed:

Sala adds that unexpected benefits can be derived from those parts of the crowdfunding campaign that involve arranging for your financing and spreading the word about it, “such as learning more about your public and attracting new followers.” Without doubt, he says, these campaign activities “provide many intangibles that can wind up being even more valuable than the actual financing that you have achieved.”

In his view, being an established artist and, above all, someone who is active in social networks and who has a large community of followers are “great secret weapons” for succeeding at crowdfunding. Nevertheless, Sala believes that success is not contingent on your status as a famous artist or someone whose mass appeal opens doors to music producers, film studios and publishers. “If you have a community of followers, even if your proposal attracts only a small number, you will be able to carry out [your crowdfunding campaign] with their cooperation,” he says.

Ink and Movement’s Cavero agrees. “The artistic component of Kaos Temple launched a crowdfunding campaign, and in hindsight, commercial brands like Red Bull participated in the project and in helping with the communication process, and people took notice. But I have launched other crowdfunding campaigns in the music sector that, when their deadlines were about to expire, [still met] their monetary goals because we mobilized a few more followers.”

In the end, participants in the Skateboarding Church campaign suggest that each individual or initiative should search for its own road when it comes to considering how to design a crowdfunding campaign. It all depends on what you hope to achieve. The Chaos Star, says Cavero, might serve as an artistic symbol and guiding principle of crowdfunding strategies. This graphical figure, which recurs in the work of Okuda San Miguel, represents a colorful, asymmetrical “wind rose,” a symbol used by meteorologists to give a succinct view of how wind speed and direction are typically distributed at a particular location.

This traditional tool tells you that “it doesn’t matter where you are, or what you are doing; the important thing is to have your own reference point for [measuring how well you are] achieving your own goals,” concludes Cavero.

How are the worlds of art, sports and business uniting in this story? There are, of course, some obvious ways. But what about concepts like brand building, marketing and promotions? What business skills do artists need to be successful? What artistic skills do business people need to succeed?

Have you heard of any other venues like the Skateboarding Church that adopt a creative reuse of vacant space anywhere around the world? If not, can you think of how you might transform a vacant space in your neighborhood? What are the advantages of this type of project? What might be some of the challenges?

Do you feel that crowdfunding has a place in the creative world? Why or why not? Visit Verkami.com and research some of the existing online campaigns. Also take a look at other crowdfunding sites for artists like Indiegogo.com and ArtistShare.com. What might be some of the challenges of crowdfunding? Why is it so important to “know your target public” before launching a campaign?