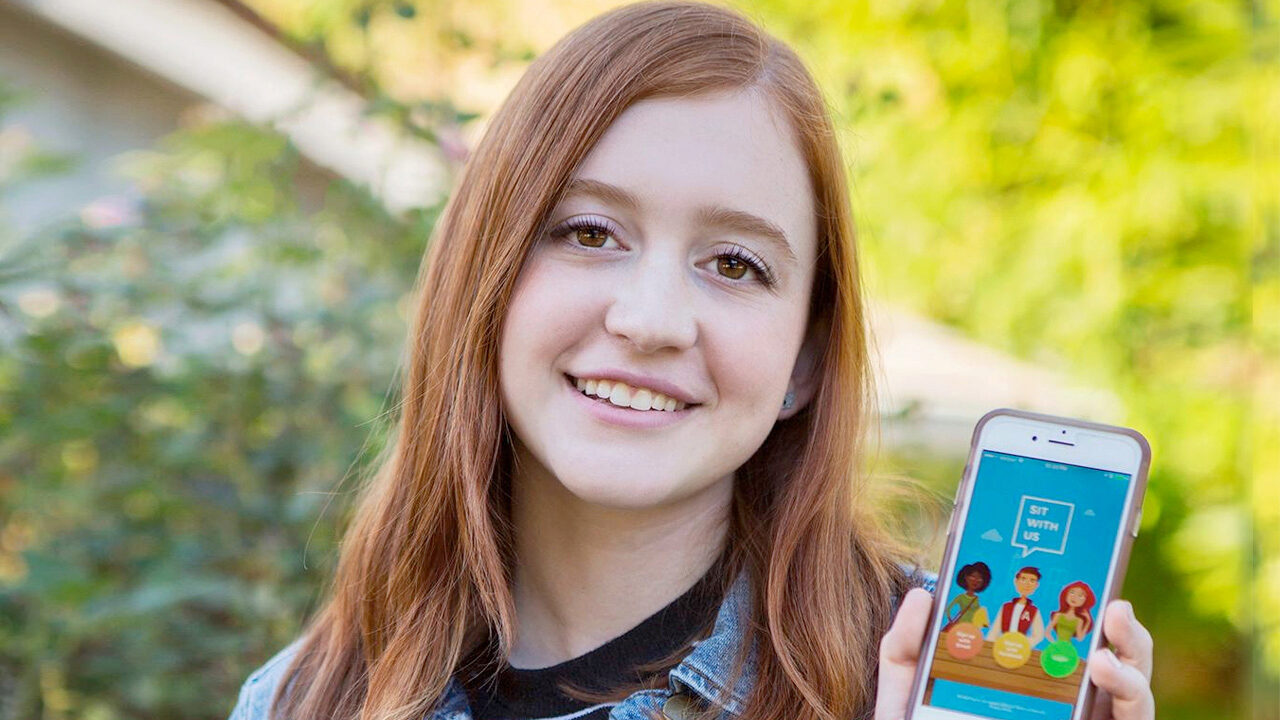 Natalie Hampton is a high school junior from Sherman Oaks, Calif. The once-bullied teen has created a new app called “Sit with Us,” a safe place for lonely kids to seek out lunchtime companionship. The free lunch-planning app allows students to find lunch tables if they don’t want to sit alone. Other high school students can sign up as ambassadors for a “Sit with Us” club and agree to post open lunches, so that anyone who has the app and has nowhere to go can find a table and possibly make some new friends.

Hampton recently discussed her innovation on the Knowledge@Wharton show on Wharton Business Radio on SiriusXM channel 111. (Listen to the podcast at the top of this page.)

Knowledge@Wharton: The problems of bullying and inclusion are still concerns at schools across the United States. Add in the pressure of being in high school and you get some students who feel like they might be alone, maybe don’t have friends. A 16-year-old from Sherman Oaks, California, is trying to be heard in this discussion. She has come up with a unique way to handle it. It’s an app called Sit With Us. It’s designed to help high schoolers meet new people, maybe at lunch, and not eat alone. Her name is Natalie Hampton. And Natalie joins us on the phone right now. Natalie, welcome.

Natalie Hampton: Thank you so much for having me.

Knowledge@Wharton: Thank you. Great to have you. This is a phenomenal idea. And I’ll start with how the idea to look into this problem came about. How did you decide on an app being one of the best ways to go about it?

Hampton: At my old school [a private all-girls academy], I was severely bullied. I was ostracized by pretty much everyone. I ended up eating lunch alone for a big part of my high school career. And so, when I was very, very lucky to change schools, I saw people sitting alone, and I knew how that felt. I knew the feelings of embarrassment and rejection that went along with that. So I would always ask them to join our table. Some of these people have become some of my best friends. I know how much it really changes these people’s lives. And so I started doing some community service with underprivileged kids. But I realized that, as soon as they stepped out onto those school campuses, there was nothing I could do. So I thought that creating an app was the best way to help kids in their schools and their lunchrooms and help them meet new people.

Hampton: We decided to create an app because phones are pretty universal in all classrooms. And it’s very private. So there’s no rejection or no embarrassment of having to go up to someone and ask [him or her] to join the table. If you do it through the phone, you know that when you get to the table, you’re going somewhere safe, and there’s nothing to worry about.

Knowledge@Wharton: And you’ve already made that connection with something. The other interesting part about this is it does build leadership skills within the high school because you have people that are taking that lead role of saying, “Yeah listen, please join me, no problem.”

Hampton: Yeah. And I think that when you have students that– I mean lunch isn’t really a big deal to most people. So it’s not that big of a time commitment to get this app and start posting lunches. And I think it’s these small changes of kids helping kids and kids doing something good for their community that really makes strides in the way that students treat each other within their schools.

K@W: How long has the app been active? And do you know how many downloads you’ve gotten at this point?

Hampton: It’s been out for a little [more than] a week. And it’s gotten [more than] 10,000 downloads, the last time I checked, which is just mind blowing to me. Because this was my little pet project. I thought this was just going to be implemented at my school. But the fact that I’ve been able to reach kids internationally is amazing to me.

K@W: Where is the farthest that you’ve actually seen this app being used?

Hampton: We’ve heard from people in Morocco, the Philippines, Australia, England, France, just all over the place. We’ve been getting pictures from all over the United States, as well. So the fact that it’s reaching tons of kids just makes me so happy, because I really wanted to reach as many people as possible.

K@W: [The fact that] you’re hearing from people [from around the world] does also drive home the [point] that we talk about this issue here in the United States, but this is a problem in other parts of the world, as well. It’s not just exclusive to the U.S.

K@W: How has doing this app changed your view of high school? And also, maybe changed what you want to do going forward in college and as a career?

Hampton: Well, I definitely had a more pessimistic view of high school when I was being bullied every day. But now I realize that there [are] kids who are willing to help each other in every single school. [There are] upstanders all over the place. I really didn’t realize how many kind and caring people were in every single school community until I created this.

K@W: The other part to it is that, and I think it’s been the case as long as kids have gone to school, is that kids in school do kind of tend to be in groups. You’re building out a new group.

Hampton: Yes. I mean it’s really hard to go up to a clique of girls, for example, and ask to join their table when they already look like a complete friend group. But if those girls are actively going on the Internet and saying, “We have a spot at our lunch table, we’d love if you’d join us, and you’re not going to be rejected,” then there’s no embarrassment, there’s no isolation. It makes it so much easier. And those people can actually be some of your closest friends in the long run.

K@W: What kind of effect do you think this will have on the problem of bullying in schools?

Hampton: Generally, I think that social media in this day and age is used for a lot of bad. There’s a lot of cyber bullying. My hope with this app is to try to combat that with creating a social media network that’s for the positive, that’s for helping people.

K@W: How have your friends and family reacted to all of this?

Hampton: My friends and family at school have been overwhelmingly positive. We’ve already gotten a ton of downloads. And a lot of my family members are opening it at their kids’ schools, and a lot of my friends are opening it at their schools. It’s just so great that there hasn’t been any backlash, that people are seeing that the true reason for this is because I really want to help other people from going through what I went through.

K@W: What is your hope, then, with this app? I mean obviously, it’s to reach as many people as you possibly can. At this point, with it being a week old and 10,000 downloads, you have the potential, it sounds like, to have a Pokemon on your hands.

Hampton: My hope is that it really helps people. Because it doesn’t matter if everyone in the world downloads it and it doesn’t do anything. My hope is that, even if it changes the life of one person, that’ll make it all worth it for me. I just want to be able to change the lives of as many people as possible, because I know how awful [exclusion] is.

Would you use Natalie Hampton’s ‘Sit with Us’ app? Why or why not? Log in and comment on this interview. Is Natalie onto something? How might she improve her innovation?

Does bullying still happen in your school? Online? Offline? Discuss all the ways that bullying and exclusion are going on around you daily. In discussing it, what did you learn from your peers? Do people define bullying differently? How do you define it?

What is an upstander? Research this term in “Related Links” and talk about how it has become associated with the anti-bullying movement, and is a true leadership quality. Natalie Hampton felt she would be as guilty as her bullies if she didn’t find a way to help those who were being excluded. Do you agree that bystanders bear responsibility for bullying?