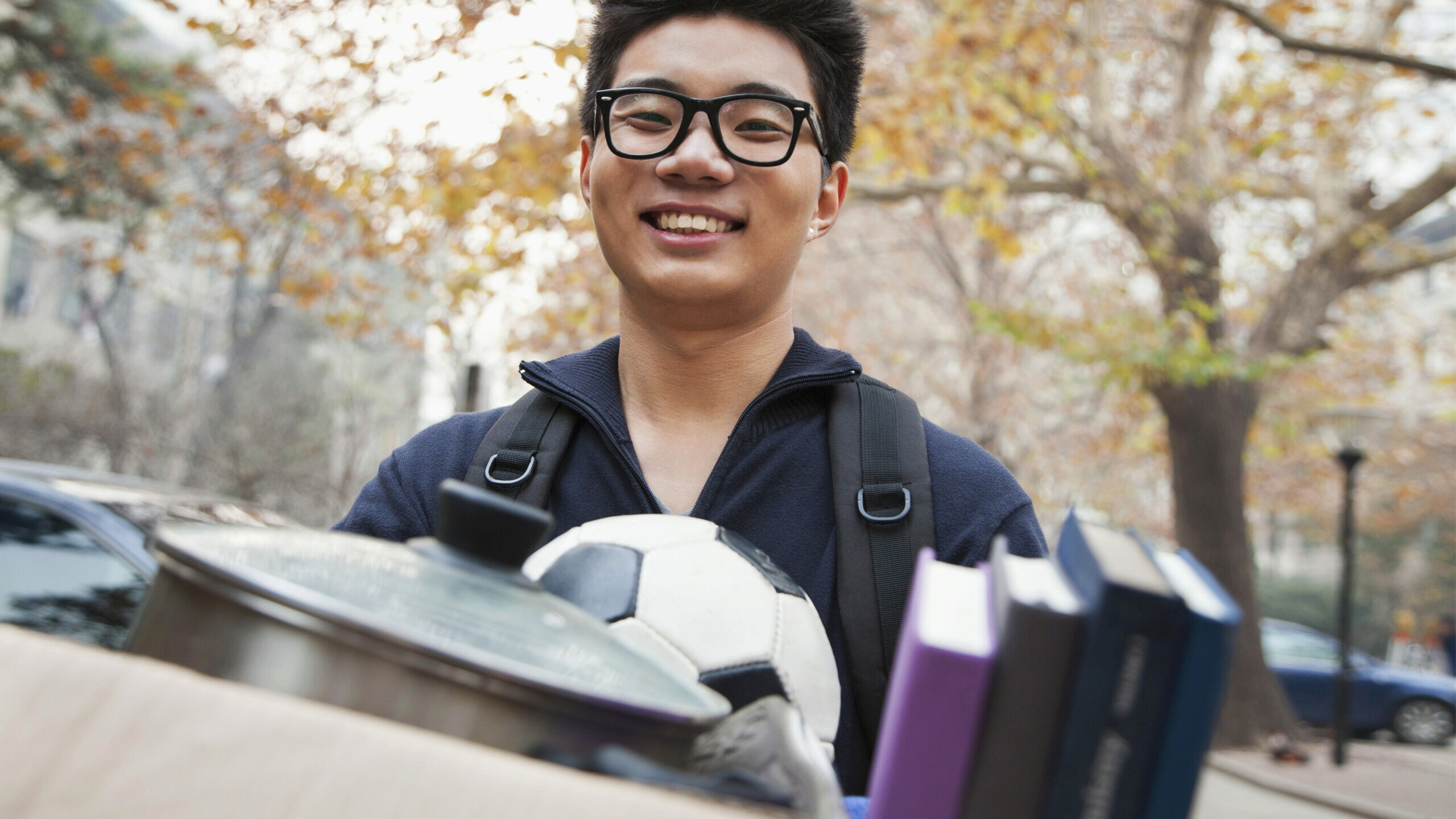 Diego Courbis, a 19-year-old from Spain, was forced to confront the same dilemma that most outstanding athletes around the world face when it’s time for them to graduate from high school. “What’s going to happen to my sports career from now on? Will I be able to balance sports with college?” Courbis, who runs the 400-meter hurdles, thought that in Spain, where the realms of academia and athletics are separate, he’d have trouble “moving forward” if he combined both aspects of his life.

The answer to his anxiety lay in the American university system, where athletes such as Courbis can receive a quality education as well as compete at the highest level in any of three undergraduate sports leagues.

Nowadays, after a long and complex process of recruitment, Courbis is studying for a Bachelor of Arts in communications at California State University Fullerton. He also competes in Division I of the NCAA (National Collegiate Athletic Association), the largest league, as well as the one that provides the largest number of scholarships. The NCAA is a non-profit organization that regulates athletes and organizes the sports programs at many colleges and universities in the U.S. and Canada. “I feel that I now have more possibilities to acquire both an educational and sports career at the same time,” says Courbis. “The university offers me help to organize my schedules and support from professors. And I get priority when it is time to choose classes, and so forth. So far, my experience has been very positive,” he notes.

Courbis is not alone. Spain has become the fifth largest foreign country in terms of the number of athletes participating in the NCAA leagues, which are organized into three divisions. Currently, the NCAA has more than 900 Spanish-born student athletes competing in a broad variety of sports, out of a total of 460,000 NCAA student athletes. Thousands of teens from other parts of the world also want to fulfill their dreams of extending their sports careers, but it is no simple task to find a university that can adapt to a student’s personal profile, meet private needs, and provide a scholarship that enables the student to finance part or all of the high costs of studying in a college in the U.S.

Courbis, who depended on the help of his family to complete a part of his athletics recruitment, confirms the sometimes challenging task of navigating the college scholarship application process. “In theory, it is easy because the athletics departments at the universities have a section on their web pages that is dedicated to applicants, and the NCAA also provides information. Nevertheless, during the process, we discovered that some colleges did not provide sports scholarships – for example, Division III of the NCAA – since they are not permitted to do so. If you take exams such as the SAT (college admissions) tests, or the TOEFL (Test of English as a Foreign Language) far enough in advance, you can wind up falling behind in the athletic recruitment process, plus you also need to translate your secondary school academic records and lots of other things [into information that can be used by college administrators in the United States].”

For that reason, more and more specialized companies are advising these athletes. In 2004 Gonzalo Corrales, who received a sports scholarship in 1995, decided to found Zaragoza, Spain-based AGM Sports so that others could learn from his experiences. “My experience was so incredible, in every sense,” notes Corrales. “Not only did [college] cost me nothing, because I am a good tennis player, but it got me to thinking: How would it be possible that the world wasn’t full of football players, tennis players, swimmers and golfers? [His implicit answer: It has to be full of them.] When my company was started up, there were only 30 Spaniards [among all student athletes in the U.S]. Now there are 900.”

Among all those, Corrales’s company has managed some 550 cases, he notes. The rest are handled by various small companies that have been created over the past three or four years. That trend confirms the growing interest in this supply of students.

On the other hand, Corrales says that family members of the student athlete must have enough flexibility to adapt themselves to these variables with total commitment. He stresses that “no one in the family should have any doubts or be unconvinced of the educational” value of the chosen institution.

Cristian Courbis, Diego’s father, agrees with that point of view. “I thought that Diego was quite talented in sports, and if he was not studying in the United States, then his talent would go to waste. It’s about the package: You can do the two things [both student and athlete], and on a demanding academic level, but if you don’t have a good grade average at the university, you cannot compete.” He stresses that he did not have any specific concerns before his son left Spain for the U.S., “beyond his ability to adapt to a different educational system, and to coaches who were also different when it came to training and building relationships with their athletes. In Europe, your coach is someone who is close; almost a friend. But in the U.S., he is like a boss.”

Diego endorses his father’s viewpoint with respect to the problems that athletes can come across at an American university. “In the beginning, the hardest thing was to get used to the more academic English used in the classroom. As for the training, around here they focus more on the physical aspects, while in Europe it is more about the technique.”

Between 8 and 24 Close Friends

Corrales stresses that international student athletes generally have few problems getting used to American schools, and the problems are usually related to the athletic aspects of adapting to them. “The failure rate is [only] about 1% to 2%. Usually, that happens because the athlete chooses the wrong school or because he doesn’t play at first. In football and basketball, it’s usually where the coaches make bad decisions; when sitting on the bench leads to doubts and to failure.” Nevertheless, in individual sports, such as gymnastics and tennis, these sorts of situations don’t occur. “Quickly, you gain confidence and everything is very easy,” adds Corrales. “In addition, compared with the usual student, the student athlete has the advantage that, as soon as he arrives in the country, he has between 8 and 24 close friends because he belongs to a team.”

As a group, the graduation rates of student athletes are higher than those of the rest of the students, and they “feel better prepared for life after college,” according to the NCAA website. Thus, eight of every 10 students earn their diplomas, and more than 35% of them earn postgraduate degrees. To a large extent, this is because student athletes are aware, even from early youth, of the importance of balancing both aspects of their lives in an optimal way.

Ashley Zhu, a 17-year-old Canadian tennis player of Chinese origin at the Phoenix Christian Preparatory School, who will study at the University of Pennsylvania starting in August, asserts, “You have to use every minute productively, because a student athlete’s time is much more precious than those [students] whose focus is on doing well in just sports or just academics.”

Corrales advised Zhu during the recruitment process and has worked with students from 40 countries, although his firm focuses mostly on the Spanish market. He notes, “There is still a lot of talent to be discovered in other parts of the world,” including Latin America. “We have an office in Colombia, but since we don’t have the same commercial infrastructure as we have in Spain, our activity there is more reactive than proactive. Nevertheless, there are some athletes in that region who have enough talent in football, golf or gymnastics to get scholarships from the United States.”

Corrales also stresses that [U.S.] college leagues are providing more scholarships and a greater number of them to women than colleges anywhere else. “Sixty-five percent of our girls have gone to the U.S., with all four years of their college paid for,” he says.

Once they graduate, international student athletes return home with an American college degree, with bilingual knowledge of English, and often with some working experience. “The athletics department makes it easy for us to contact companies who are interested in hiring professionals with our kind background,” says Diego Courbis. “I have already had direct contact with some [company recruiters] concerning [what I will do after] my graduation in 2019.” The skills that student athletes nurture in college – including time management, accountability, goal-setting and teamwork – help to make them attractive candidates in today’s competitive global job market.

This article provides perspective on how international student athletes view U.S. higher education and sports. What are a few things you learned about the differences between the U.S. and other countries?

The article states that “As a group, the graduation rates of student athletes are higher than those of the rest of the students.” Why do you think that’s true?

Student athletes don’t always excel or succeed. There are certainly challenges to this lifestyle once you reach college. Explore the “Related Links” section and discuss what might happen if your post-high school sports career does not go as planned.

4 comments on “International Student Athletes Learn How to Compete at U.S. Colleges”

Network Man: Behind the Scenes at Spike TV

The Conversation: 3 Things to Know About the Direction of Data Analytics