Past KWHS essayist Jonathan Heckman will soon graduate from Embry-Riddle Aeronautical University and start a job as an aviation analyst with United Airlines. Drawing on his experience as an aviation blogger and business student, Heckman takes a look at this week’s merger between American Airlines and US Airways. …Read More 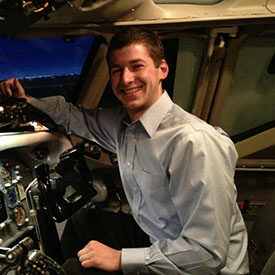 KWHS first met Jonathan Heckman as a high school student in 2008 when he wrote a piece about his experiences creating and writing “Aviation Buzz,” a blog about the commercial aviation industry that eventually became known as JetCheck.net. His life-long passion for everything airplanes — which he described back then by saying, “For me, flight is an escape; a freedom and diversion from everyday life. Flying takes us to new places, and old; it’s a bridge to culture that’s unparalleled in speed and perspective” — found a fascinating outlet in his devotion to the business of aviation. His blog covered airlines, airports and aircraft manufacturing. This was only the beginning of Heckman’s interest in the business of the skies. Today he is a senior at Embry-Riddle Aeronautical University in Daytona Beach, Fl., pursuing a bachelor’s of science degree in business administration with majors in air transportation and management. KWHS asked Heckman to offer some insight into this week’s merger between two of the largest commercial airliners, US Airways and American Airlines.

Knowledge@Wharton High School: Were you surprised on Thursday when you heard the news that American Airlines and US Airways plan to merge?

Jonathan Heckman: Industry analysts and participants speculated about this merger a long time ago. Following the mergers of Delta-Northwest and United-Continental, the two major legacy carriers left to complete a mega-merger were US Airways and American Airlines. This process began as a sort of courtship by US Airways and, until now, it remained uncertain as to whether or not American [which filed for bankruptcy in 2011], its creditors and board would choose a standalone plan or merge. The industry struggled through the recession but recent years have shown recovery and better [strategies] to weather tough periods. The airlines’ largest cost, fuel, continues to play a major role in determining profitability.

KWHS: What does this merger mean for travelers?

Heckman: American and US Airways share just 12 overlapping routes, which is very minimal. The routes that overlap are generally hub-to-hub routes (like Philadelphia to Dallas/Fort-Worth). The Department of Justice and industry analysts use route overlap and combined market shares at airports as a measurement for competitive impact. The biggest and most widespread fear among consumers is ticket prices: How will this merger affect my wallet? Consumers argue that they have fewer choices, while the combined airline argues that they now are the right size to adequately compete with their larger peers. Honestly, it is uncertain what the impacts will be on airfare. Reduced competition and a greater market presence in some regions may push fares up, but more competition among three large carriers may spur “fare wars” that could lower prices. There are benefits, however, to [having] mega carriers [like this new merger will create]. Consumers have access to a wide route network that includes some 336 destinations worldwide. Additionally, the merger of frequent flyer programs allows consumers to redeem miles to more destinations and will provide additional opportunities to earn and redeem miles. Once the merger is finalized and some time has passed, large mergers like these allow consumers to fly a single airline with a consistent look and feel to more places.

KWHS: Have you been blogging about this recently? How closely do you still follow the industry?

Heckman: Upon beginning internships, I determined it would be best to discontinue blogging. Yet, I continue to follow the industry very closely and regularly keep up-to-date on news via the A4A Smartbrief (Airlines for America) and airline forums (airliners.net), and I subscribe to a daily update on changes and announcements of global airline routes (airlineroute.net). In my second year at Embry-Riddle, I researched and penned a paper on the effects of airline consolidation on employee productivity and morale. I would say airline mergers and acquisitions have always fascinated me. Mergers surely pique my interest, as there are so many factors and decisions to be made when combining two carriers. What routes are we going to keep? What on-board product are we going to offer? What brand and name will remain? The decisions seem infinite. Yet, ultimately, the combined organization’s culture and dynamics are likely the most importance aspect to any merger in any industry. The numbers may add up on paper and the route maps may align, but if the people are not on board and enthused about coming to work everyday, it’s difficult for the merger to “succeed.”

KWHS: Will the shakeup in commercial aviation continue?

Heckman: I think the dust is starting to settle in the U.S. The moves have been made, and now it’s time to start seeing these merger synergies come together.

KWHS: Are you happy that you made the choice four years ago to attend Embry-Riddle and pursue aviation as a career?

Heckman: My experience at Embry-Riddle has been truly incredible, eye-opening and life changing. I have had the opportunity to attend a university where I am surrounded by all components of the industry — from those pursuing a career as a pilot, an air traffic controller, a mechanic, a career in aviation business and aerospace engineering. I have completed internships with Delta Air Lines (Network Planning), Daytona Beach International Airport (Administration/Operations) and the Allegheny County Airport Authority — Pittsburgh International Airport (Capital Planning). I suppose you could say kerosene has always been in my blood. Even at age seven, I found commercial aviation fascinating and made it my goal to attend Embry-Riddle. Yet ultimately, the mixture of aviation and business, the like-minded students, the international and diverse culture, and the tight-knit community attracted me to the university and its college of business. It is exciting to attend courses with students and faculty who offer unique backgrounds, yet share similar interests and passions. Following my graduation in May, I will be starting my career as a pricing and revenue management analyst at United Airlines in Chicago. It’s a real thrill to see my dream career come to fruition.

Will consumers pay higher ticket prices as a result of the US Airways/American Airlines merger?

Jonathan Heckman has had a love of flying since age 7. How has he developed that passion through the years?

What are the dangers of choosing a career track so early? The strengths?