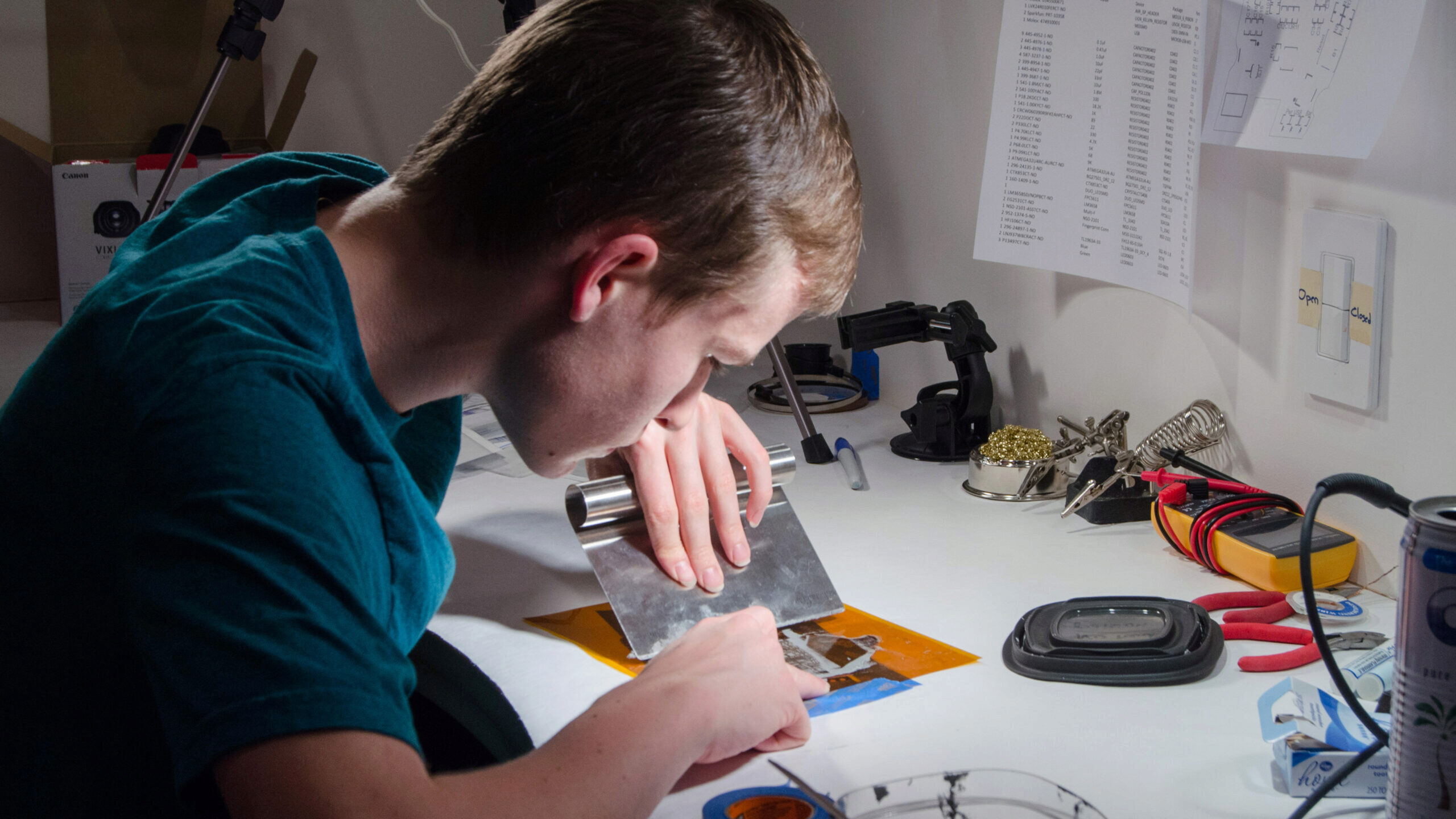 When Kai Kloepfer was 15, an event changed the course of his life. Then a student at Fairview High School in Boulder, Colorado, Kloepfer lived 30 minutes from a Century 16 movie theater in Aurora, Colorado. That year, on July 20, 2012, a mass shooting during a midnight screening in Aurora of the film The Dark Knight Rises, killed 12 people and injured 70. Kloepfer, a science fair enthusiast who had created blimps, remote-control robots and other cool projects, suddenly felt moved toward a new engineering mission. How could he use his scientific expertise to tackle the frightening reality of gun violence and mass shootings in the U.S.?

Kloepfer dove into the research surrounding this issue and soon discovered a clearer path for his project to address: suicides and accidental deaths by firearm. “We basically have a mass shooting everyday in the U.S., but these shootings don’t happen all in one place,” notes Kloepfer, who is now 19 and a freshman at Massachusetts Institute of Technology. “More people die from firearms in the U.S. than they do from auto accidents, and the majority of them are suicides. If we want to prevent these, we have to be proactive about securing firearms.”

As a high school sophomore, Kloepfer set out to develop a better kind of smart-gun technology that, similar to unlocking our smart phones, could only be fired when it read its owner’s fingerprint. He went on to win his state’s 2013 Intel International Science & Engineering Fair in the Electrical and Mechanical Engineering category — and then admitted to being burned out from months of intense work. He put his “Biometric Electromechanical Firearm Safety” research on the back burner and resumed life as a teen.

Several months later, Kloepfer was on a summer vacation in Switzerland with his family when he received an email from the Smart Tech Challenges Foundation, which funds people who are creating new firearm safety technology for the American marketplace. “I was looking up at this mountain and checking my email,” recalls Kloepfer, who had applied for a grant but never thought he would get it. “The president of Smart Tech Challenges sent me this message that said I had the grant and to please send them my work plan and budget within three days.”

And with that, Kloepfer began building the foundation for his company, Biofire Technologies. With the $50,000 Smart Tech Challenges grant, he was thrust into entrepreneurship, and his science fair passion transitioned from a project to a business startup. “I ended up raising the initial money in grants and donations, about $175,000, which I used to further develop the technology and build a prototype,” says Kloepfer.

The current proof-of-concept prototype, built from 3-D printed plastic, is a smart gun with a built in fingerprint sensor that knows who is firing it. It is considered the first major advancement in firearm safety in decades. Development of an advanced prototype on a live firearm is underway.

Kloepfer, recently named to the list of Forbes 30 Under 30 rising business stars, is now surrounded by a team of top lawyers, angel investors and Silicon Valley advisors. And he was recently featured in a front-page Wall Street Journal article. “It has been awesome,” notes Kloepfer, who has had to become schooled in the political and socio-economic factors that fuel the debate around gun ownership and restricted gun use. For a number of reasons, big gun manufacturers were turned off years ago to the idea of smart gun technology. The discussion over whether or not it is a good idea rages on. Still, Kloepfer remains an innovator and an advocate. “People seem really interested in what I’m doing. More than that, it’s a great platform to be a technology evangelist for smart guns and the dangers of gun violence.”

Kloepfer especially wants other teens to learn from his engineering-driven experience, which has opened many new pathways for him. He sums up his insights this way:

What aspect of Kai Kloepfer’s story interests you the most? Is it suicides by firearm? Is it a love of technology? Is it the appeal of entrepreneurship? How do these themes connect with your own life? Discuss with a group what inspires you to learn more and why.

The story says that Kloepfer had to “become schooled in the political and socio-economic factors that fuel the debate around gun ownership and restricted gun use.” Using the related links, explore what some of these issues might be. Why would people protest the development of a technology that helps save lives? Debate this with a group or classroom.

Do you think Kloepfer’s advice to not be “afraid to challenge things” is valid? Can you think of a time when you challenged an idea or norm? How did it turn out? Was it hard to take that first step? Why is it sometimes so hard to go against prevailing beliefs? Share your story in the comments section of this article.

When Was the Last Time You Visited a Bank Branch?