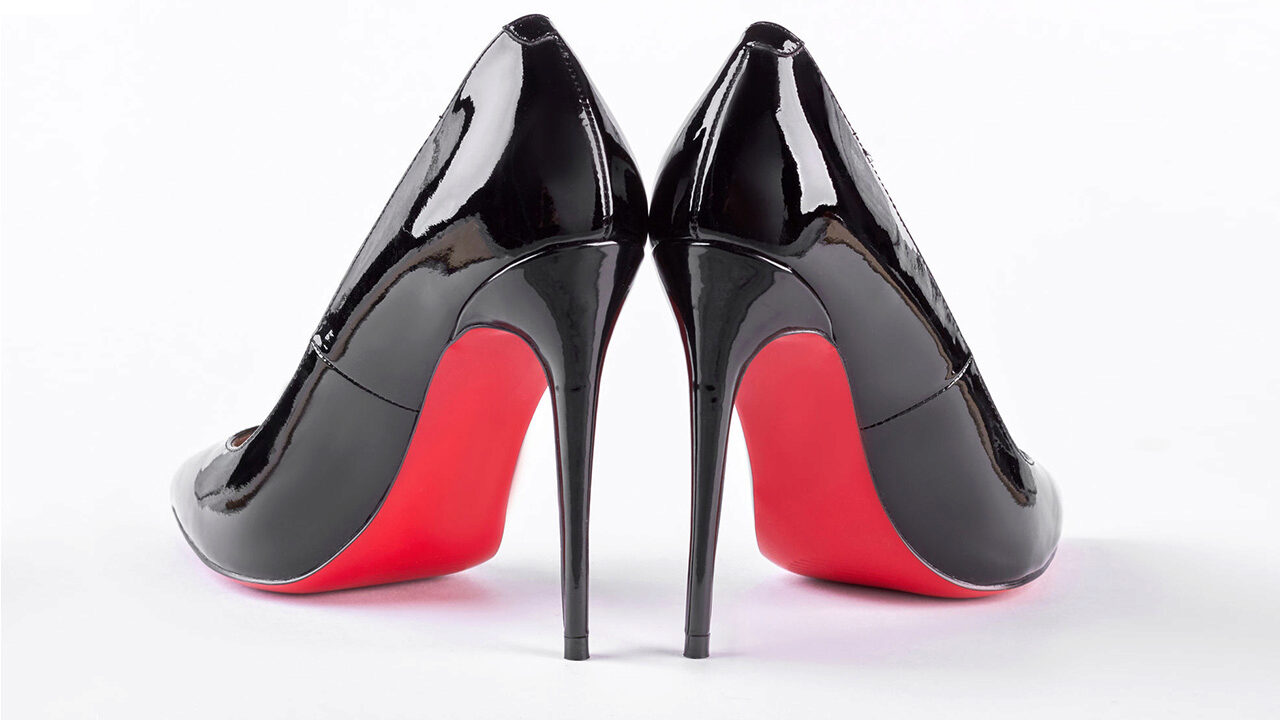 French fashion designer Christian Louboutin is known worldwide for shoes with an eye-catching, red lacquer sole – shoes that typically sell for $500 and up. When a well-heeled celebrity or socialite reveals that quick flash of red from the bottom of her sexy stilettos, it’s powerful publicity for the respected fashion house. You might remember when Khloé Kardashian recently showed off her baby bump while wearing a pair of Louboutin pumps.

But the latest news involving the fashion designer has far less to do with who is wearing his shoes and more to do with what makes his brand stand out – namely, those crimson soles. Louboutin once said, “The shiny red color of the soles has no function other than to identify to the public that they are mine. I selected the color because it is engaging, flirtatious, memorable, and the color of passion.”

It seems that other fashion retailers are trying to capitalize on Louboutin’s red signature, which is why he asked the European Court of Justice to stop Dutch chain Van Haren from selling shoes with a similar red sole, arguing that he had trademark protection registered in Belgium, the Netherlands and Luxembourg for that particular shade of red. But the court in February disagreed, saying “a trademark combining color and shape may be refused or declared invalid on the grounds set out under EU trademark law.” In other words, the color alone was not enough to protect Louboutin from knockoffs.

Although the case is not over, it raises some interesting questions about the limits of trademark law and how far companies should fight to protect their brands. The Knowledge@Wharton show, which airs on SiriusXM channel 111, invited Ludovica Cesareo, post-doctoral research fellow in marketing at Wharton, University of North Carolina School of Law professor Deborah Gerhardt and New England Law professor Peter Karol to discuss the issue. The following are four key points from their conversation.

The professors said they were surprised to see the EU court side against Louboutin in the case over color, considering the United States and India have previously upheld the designer’s right to trademarks.

“In the United States, we’ve normally had less protection for a fashion design than we see over in Europe, especially in the copyright space [copyright infringement]. We are just not as open to protecting fashion designs as they are in Europe,” Gerhardt said. “Here’s a flip where the U.S. has said yes, you may have your trademark … but in Europe they’ve said no.”

The case calls to mind other fashionable products that have sought protection, such as Burberry’s signature plaid trenchcoat or Converse’s Chuck Taylor shoes. Both items are trademarked.

“Every time we think about trademarking, we start with the brand name and the logo. Those are the things that companies want to protect first,” Cesareo said. “But, especially in luxury, there are other things that consumers come to recognize as a symbol or a signature for the brand that need to be protected. For Christian Louboutin, the red sole is the signature of the shoe. It makes sense that he wants to protect it in every jurisdiction in the world. You need to understand that for a consumer, the red sole means something. It signals luxury, it signals quality, it’s a status symbol. It signals sexiness in general.” Cesareo referenced the hit song “Bodak Yellow” by Cardi B., who raps about buying “red bottoms” as a benchmark of her own success.

Louboutin isn’t trying to protect just any shade of red. The scarlet he uses is specific — Pantone 18 1663TP. “It’s fascinating because the color red on the sole has come to signal something, but it hasn’t fully been associated with the Louboutin name,” Cesareo said. “People who have high cultural capital in fashion, they know that it’s a Louboutin shoe. But to the general population, it doesn’t matter if it’s a Louboutin or some other Dutch, lower-end shoe. As long as it has that red sole, it’s signaling something.”

Gerhardt, who is working on an article about color ownership, said color works so well in branding, yet few companies try to protect that commercial distinctiveness. “Even though color is so expressive, 80% of the marks that have been registered in the last 25-year period are words; they’re text. Another 20% are designs,” she said. “If you try to make a pie chart of all the brands that claim color in terms of trying to register them as a trademark, it is .02% It is such a small sliver in my pie chart, you can barely see it.”

Gerhardt said there is a growing body of research indicating the importance of colors and signals they send. “In the U.S., courts recognize that,” she said. “The U.S. courts have tried very hard to parse those messages and say, if you’re sending a message that goes to flavor, like red for a strawberry-flavored drink, then you’re not going to be able to get a trademark. But if you are using it truly for source identification, and the public has grown to believe that the red does signal source, then in that context you can get it protected. It’s really a very nuanced analysis that the U.S. courts engage in. They’re trying to figure out the purpose of the expressive message being sent.”

Copying a design is a form of piracy. In this case, Van Haren is trying to steal the status and appeal of the original, according to Cesareo. “Even though they weren’t knockoffs legally speaking, they were still pirating a design that Louboutin felt needed to be protected.”

Losing the case could be disastrous for Louboutin because it’s already one of the most counterfeited brands in the world, according to Cesareo. A few years ago, a shipment seized at the port in Los Angeles yielded more than 20,000 pairs of knock-off Louboutins, which would have been worth about $18 million if they were real.

“This could cause a real dilution of the brand,” she said. “Not just knockoffs of the brand itself, but the second that this becomes very widespread and everybody starts wearing red-soled shoes, they lose that scarcity, that status symbol. They’re going to lose their distinctive power. It doesn’t just mean that knock-off sales are going to go up, but sales of the original, authentic brand are going to go down.”

But Karol said the European court’s decision reflects a mindfulness of countervailing concerns. “You don’t want later designers to be worried about putting red on their shoes. We want red to be free for everybody to use. We want to keep that freedom and not chill these designers into worrying about how they are going to use it exactly.”

The scholars said the conversation brings them to an important point about purchasing counterfeit goods. Many consumers simply don’t know the difference. “When you’re dealing with low price-point goods, you have a thing that trademark scholars like to talk about, which is more post-sale confusion,” Karol said. “Somebody buying $150 shoes probably isn’t thinking that’s a Louboutin. They’re not confused right there. But the consumers we are worried about are the ones that are later seeing it on people’s feet and maybe are then confused into thinking that it’s a Louboutin.”

Cesareo agreed, saying noone buying a cheap imitation Gucci bag on the streets of Rome should fool themselves into thinking they got a great deal. “Even if the price point is high enough, just the location of where you’re purchasing should signal that something is wrong.”

But online shopping makes it more challenging to know what’s in the box. Copycat websites look so much like the real thing that unwitting consumers don’t know they’ve been duped until the purchase arrives at their door.

“The internet has made it incredibly hard for brands to protect their intellectual property,” she said.

“It can be tough for the eBays of the world, too,” Gerhardt said, noting that the auction site was sued over the sale of counterfeit Tiffany jewelry. “They don’t have a way of checking whether all the eBay sellers are selling authentic things or not. It can be terribly challenging, especially for auction sites that never see the product.”

The scholars said they believe Louboutin will continue to push the courts for trademark protection. They also think the designer will pursue other avenues to protect his precious red soles.

Gerhardt noted that the case is an “interesting disconnect” for Europe, which values its fashion houses as a deep part of the culture, not to mention the economy. “It will be interesting to see whether this decision [against Louboutin] holds up.”

Do you think Christian Louboutin should be able to trademark his signature red sole color? Why or why not? Can you think of any other brands that use color as a differentiator?

Ludovica Cesareo says that copying a design is a form of piracy. Do you agree that Van Haren is trying to “steal the status and appeal of the original?” How does this differ from actual knockoffs? Is it just as unethical?

How do you feel about the counterfeit and knock-off market, especially related to fashion? Where do you draw the ethical line? Many people buy knockoffs in hopes of presenting them as originals. Have you done this and, if so, with what products? Why is this damaging to companies and their brands? Does this article give you a new perspective?

Eyewitness to Economic Development: A Teen Helps Grow His Community