An Intelligent Glove, a Smartphone App and a Teen’s Perspective on What’s Missing in School

Jake Coppinger, 17, has always loved technology. When he didn’t get the type of experimentation he was looking for in high school, he began to explore bigger and better ways of creating things on his own. The result? Swirlesque, an intelligent glove that can recognize hand gestures and communicate with a Smartphone to connect to any Internet-enabled device. Coppinger discusses the power of innovative thinking, both inside and outside the classroom.…Read More 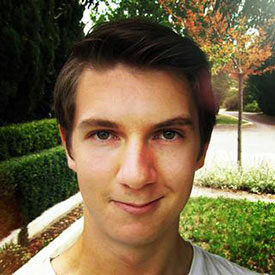 Blockbuster movies like the Mission Impossible franchise feature cool gadgets and gizmos that inspire awe in fans. Merely science fiction? Not for teen entrepreneur, Jake Coppinger. Last year Coppinger, now 17, invented a Bluetooth-enabled computerized prototype of the Swirlesque, an intelligent glove that allows users to interact with any Internet-driven technology. Earlier this year, Jake became the youngest-ever speaker to front TEDx Sydney, to share on stage his knowledge, talents and the result of eight months of work, his intelligent glove.

‘A Lazy Wave of the Hand’

A devout techno-whiz, the high school student from Gungahlin College, Canberra in Australia, pondered the disconnect between technology and the way we link, manage and control the functions of our devices. Someone had to create a master device that allowed people to control their electronic environments – and not the other way around. And, to world acclaim, Coppinger – who has been compared with Apple’s legendary Steve Jobs – did just that. Now, all it could take to master our electronic life is a lazy wave of the hand or the flick of a wrist.

“[tweetthis alt=”” hashtag=”” url=””]With the Swirlesque, users can control devices without looking at a screen or having to sit in front of a device[/tweetthis],” says Coppinger. “I see my invention as having the capacity to greatly assist people with motion difficulties. But for everyone, the technology has applications for, and well beyond, the everyday,” including the end of the long reign of device-specific, push-button remote controls.

A microcomputer embedded in the glove processes a simple, pre-programmed set of gestures so the glove is able to recognize what it is the user wants to do, such as control smartphones, computers, televisions, lighting, CD or DVD players, open or close curtains, garage doors and more. Once these gestures are recorded, users don the glove, launch the smartphone app, then press a button on the glove to connect via Bluetooth to the phone, and their electronic domain is mastered.

Coppinger’s technology is about more than a young inventor’s eureka moment. From his student perspective, Coppinger wonders whether or not the Australian high school curriculum – as well as possibly curricula around the world — is keeping up with clever students for whom, increasingly, critical knowledge is being sought beyond the school gates. True innovative thinking is not necessarily incorporated into the classroom. Students, says Coppinger, are fast becoming dissatisfied with being relegated to ‘user’ and not ‘maker’ of the high-tech devices they want to use.

“[tweetthis alt=”” hashtag=”” url=””]There’s a massive difference between reading a text book and creating science yourself[/tweetthis],” he notes. “Anybody can build anything if they have the creativity. We just have to remember that [tweetthis alt=”” hashtag=”” url=””]some of the world’s biggest inventions hail from someone’s basement somewhere. In my case, it was our attic.[/tweetthis]”

While partial to the subject mechatronics, Coppinger became frustrated with the course content’s lack of design, production and testing elements – attributes vital to making the move from passive user to creator. He was left with little option but to use the Internet to teach himself the missing skills. The more Jake studied, the more he realized he needed an advanced knowledge of trigonometry, 3D modeling and electronic design, as well as mechatronics, to make his creative circle complete. He mastered these using only the Internet and his own thirst for knowledge.

To others who like to tinker with electronics and who may wish for a similar, commercially viable outcome, Coppinger has some advice: “Follow your passion – hobby electronics can take you a long way. Mine the Internet, and teach yourself what is missing from school,” he says. “[tweetthis alt=”” hashtag=”” url=””]If I could get school students more interested in taking control of their learning, they would be amazed at where they can take themselves.[/tweetthis]”

As a young boy, Coppinger became enthralled with all sorts of design, as well as the art of film, which he finds helpful in communicating his technical work. He designed and built his own website (linked below) that features many of his videos. The Internet will never replace good teachers, “but it can turn curiosity at a young age into learning,” he notes. “As long as you have passionate teachers as well as an Internet connection, you can achieve anything, no matter what your background. Do not be afraid of tinkering or experimenting.”

Coppinger stresses that while the high school curriculum falls short, college is better prepared to develop students’ technical skills. Supporting higher ed, he believes, goes along with supporting advancements in science and technology. “Intelligent students aren’t necessarily wealthy, and [tweetthis alt=”” hashtag=”” url=””]I think society should support higher education to create intelligent industries for the future[/tweetthis],” he says. “Many countries are no longer competitive at basic manufacturing, so we should try exporting our brainpower. Supporting higher education and making it accessible is the way to achieve that.”

So far, 2014 has been huge for Coppinger. Major science organizations, such as Australia’s Commonwealth Scientific and Industrial Research Organization (CSIRO), are taking notice. The Swirlesque was a winner at the BHP Billiton Science and Engineering Awards 2014, and Coppinger was chosen to compete at the Intel International Science and Engineering Fair in California this May.

Where to from here? Coppinger says, “I would love to pursue a career in science and engineering, but the chances are that what I want to do isn’t even invented yet.”

What does Jake Coppinger mean when he says, “There’s a massive difference between reading a textbook and creating science yourself?”

Do you feel your school does a good job infusing innovation and experimentation into the classroom? Why or why not? How could this be improved?

Watch Jake Coppinger’s TEDx talk (linked below). What are the key takeaways? What did you learn from his communications style and content?