More and more students are graduating from college strapped with student loan debt that takes many years to pay off. The good news is that taking out loans does not have to be your only option to pay for college. Abby Parnell earned 24 credits before she even got to campus, and Ahmed Raza explored entrepreneurship to offset college costs. Read more about how these teens and others found ways to deal with the high cost of an undergrad degree.…Read More 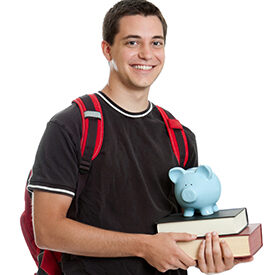 Abby Parnell will start her freshman year at Messiah College in Mechanicsburg, Pa., this fall with about a year’s worth of college credits under her belt. That’s because Parnell, a homeschool student at Bridgeway Academy, an online school, signed up for dual enrollment at Desales University in Center Valley, Pa., and took courses that allowed her to earn credit for high school and college at the same time.

Parnell, 18, who will double major in biochemistry and nutrition, saw dual enrollment as a way to cut her total tuition bill for a four-year degree. Enrolling in the program cost her $5,000 a year and offers her a potential $40,000 savings (the total bill for a year at Messiah College) because she earned 24 college credits, enough to give her standing as a sophomore. She also received a $13,000 scholarship from Messiah College.

A Strategy for College Savings

Like Parnell, high school students are searching for ways to pay for college. Many students even wonder if it is too late to find the funds they need without taking on a lot of student loan debt. A Fidelity Investments study released in May 2013 showed that 70% of the class of 2013 was graduating from college with college-related debt, averaging $35,200. And according to Credit.org, college costs have increased 42% in the last 10 years and continue to go up by 6% per year. [tweetthis alt=”” hashtag=”” url=””]While it can be daunting to think about financing a degree, coming up with a strategy sooner rather than later – and thinking out of the box — can help you find as much money as possible.[/tweetthis]

Parnell says the dual enrollment program was a lot of work but worth it in the long run, especially because the private high school she previously attended got rid of Advanced Placement classes her senior year, which could have helped her earn credits for college that enabled her to graduate a semester or even a year sooner. “I transferred away from that when they cut most of the AP courses and raised the price,” she says. Dual enrollment was “worth it because I did save a significant amount of money, and I definitely am a lot more prepared for college.”

[tweetthis alt=”” hashtag=”” url=””]When it comes to paying for college, you want to “play every legal angle you can to reduce costs,”[/tweetthis] says Jack Schact, founder of My College Planning Team, which counsels students on the college application process and offers workshops in the Chicago area. In addition to dual enrollment programs and summer courses, “most [high] schools forget about the CLEP [College Level Examination Program] and DSST programs” that offer examinations that students can take to earn college credits.

“I would love to reach families when their kids are in first grade,” says Schacht. But even when students are in high school, he suggests a number of strategies for families to pay for an education, such as receiving tutoring to increase standardized test scores. He says he worked with a student who applied to a college that required a minimum ACT score to receive a scholarship, and when he earned a two-point increase after tutoring, the school awarded him $10,000 more than he would have received.

Scholarships and grants helped Shanice Miller, a 2011 graduate of the University of Maryland, Baltimore Dental School, to graduate debt-free. Miller didn’t know much about the application process and didn’t begin looking for scholarships until her senior year at Charles Herbert Flowers High School in Springdale, Md. Towson University awarded her scholarships and grants covering most of the $20,000 cost of attendance, but she missed out on a $2,000 scholarship when she did not check a small box on the application. She says she made the mistake of not following up on an error in the online application, and cautions students to always follow up with a phone call if something doesn’t seem right with an online system.

After her first semester, Miller decided to change her major from graphic design to dental hygiene – a major Towson did not have – so she somewhat reluctantly transferred to Prince Georges Community College in Largo, Md. “I had all the same thoughts that [many students] did about community college. It really was my last choice, but it ended up being my best decision,” says Miller. Taking requirements there helped her get the classes she needed and stay on track to graduate in four years – again, saving her money despite her new career path.

When she transferred into the dental school at the University of Maryland, she had a mix of merit, state and local scholarships that paid the entire bill and put several refund checks in her pocket totaling more than $10,000. [tweetthis alt=”” hashtag=”” url=””]Miller, the author of How to Graduate Debt-free with Money in the Bank, advises students not to wait until the last minute to apply for scholarships like she did, and to apply for as many different types of awards as possible.[/tweetthis]

For many students, getting through college without a lot of debt means working part-time, while attending classes. But when Ahmed Raza, 18, starts his freshman year at the University of Texas at Austin this fall, he won’t be flipping burgers or working in the campus dining hall. Instead, the graduate of Harmony Science Academy in Houston will be running Tokyogrid.net, a website he owns that sells currency exchange software, which allows people to trade currency, similar to trading stocks.

Raza says he has been interested in entrepreneurship since he began buying and repairing cell phones and Xboxes at 13, which he then resold. After launching an electronics site at 15, he realized he could make more revenue by purchasing websites rather than creating them. He began buying small sites for a couple hundred dollars each and selling them, profiting $2,000 at the most.

But when Raza’s father left and his mother wasn’t working, it became tough to pay the bills. He figured that especially for college, “I was on my own, and for the rest of the things around the house we’d have to do something,” says Raza. After extensively researching currency trading, he bought Tokyogrid.net last June using $40,000 he and his mother borrowed from friends and family. After 10 months, he says, all the debt was paid off and the site became profitable.

Raza, a computer science major who hopes to switch to the business school, plans to continue running the website part-time while attending classes, and is working on an e-book for people who want to learn how to buy websites. He says the money he earns from his business will help pay for living expenses while attending college, and he plans to graduate debt-free. “For now, I actually do have scholarships and don’t have to get loans…but [the website] will help me to live better and pay for extras.”

How can dual enrollment, CLEP and DSST actually save you money on your path to your college degree?

Shanice Miller, author of How to Graduate Debt-free with Money in the Bank, could have better prepared for her college experience. Describe a few ways she could have saved herself money before she headed to campus.

While not every student can become a successful web entrepreneur, what does Ahmed Raza’s experience suggest about thinking creatively and strategically and leveraging all the opportunities available to you to reach a goal?