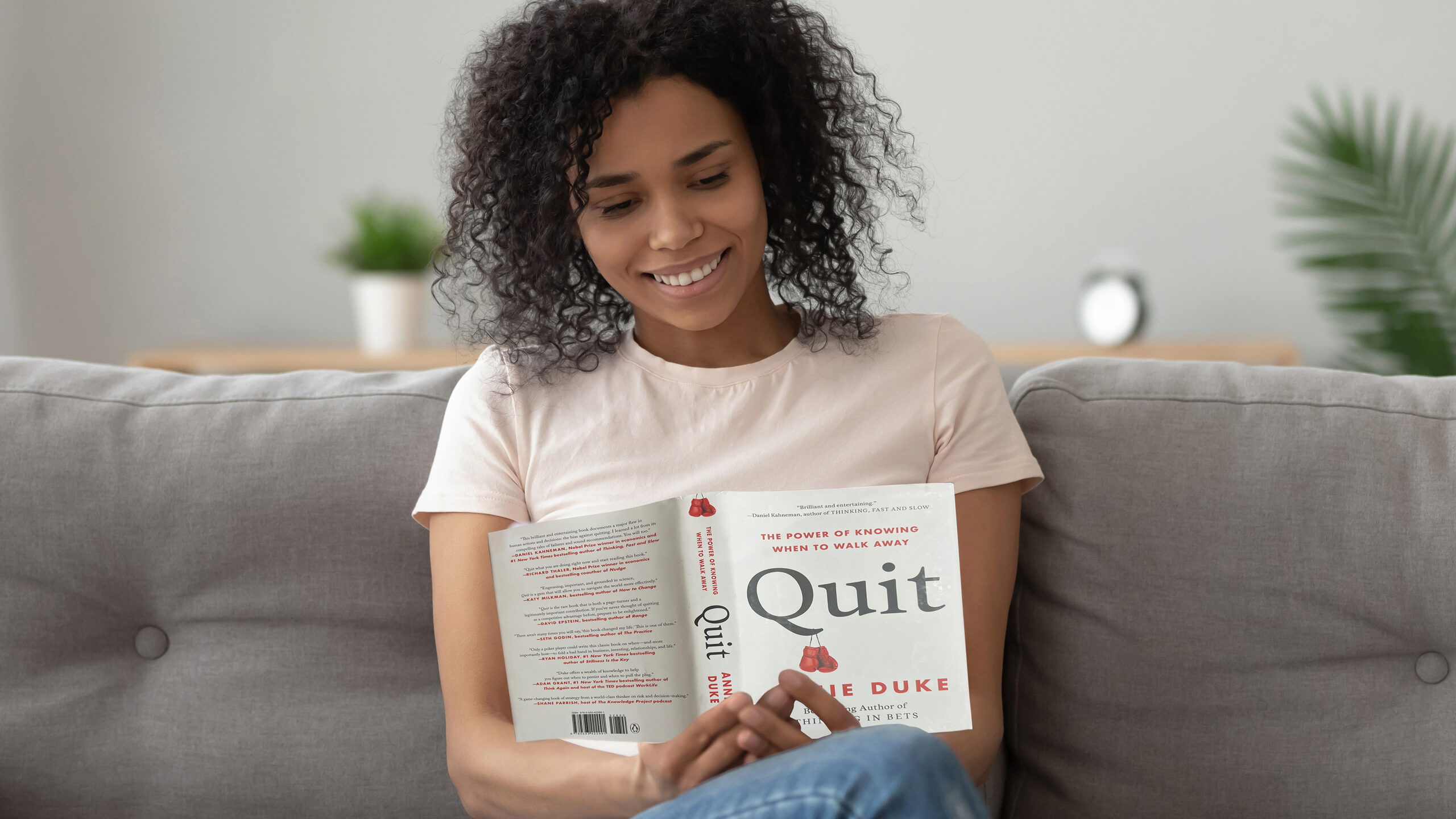 Annie Duke has built a career out of being a deep thinker. She is on track to earn her doctorate in psychology from the University of Pennsylvania. Duke is also the cofounder of The Alliance for Decision Education, a nonprofit that wants to empower students through stronger decision-making skills. And – in an enterprise that perhaps requires her deepest thought and most strategic decisions — she is also a renowned poker player who earned $4 million in tournament poker before retiring from the game in 2012 (many poker champs have advanced training in psychology or behavioral science).

Annie Duke knows a thing or two about when to hold ‘em and when to fold ‘em.

During a Wharton McNulty Leadership Authors@Wharton conversation at the Wharton School in Philadelphia, Duke sat down with Wharton management professor Adam Grant to talk about the power of knowing when to walk away, the theme of her latest book, Quit.

“People stick to things all the time that they don’t succeed at, sometimes based on the belief that if they stick with it long enough, that will lead to success,” writes Duke. “Success does not lie in sticking to things. It lies in picking the right thing to stick to and quitting the rest.”

Here are 5 highlights about the virtues of quitting from Duke’s hour-long discussion with Grant, with added context from her book:

1️. Should I grit or should I quit? While these two concepts – sticking with something or giving up on it – are viewed as opposing forces, Duke says that quit and grit are two sides of the same decision. Anytime that you are deciding whether to quit, you are also deciding whether to stick with something. “Grit gets you to stick to hard things that are worthwhile. That’s a really good thing. Everybody should get [Wharton and Penn Professor] Angela Duckworth’s book, Grit. It’s a really important quality to develop in yourself,” said Duke. “But notice I said hard things that are worthwhile. This is the key. The problem with grit, when taken too far — which is our tendency — is to stick to hard things or not hard things that aren’t worthwhile. Why? Because we have a strong bias against quitting as adults.” According to Duke, getting the timing right about when to quit means looking into the future and seeing that the chances things will go your way are too slim.

2️. Timing is everything. A fundamental problem of making the decision to quit is that quitting on time will usually feel like quitting too early. In Quit, Duke writes that we are reluctant to walk away when we should because we have the feeling that doing so will slow our progress or stop it altogether. But by sticking to a path that is no longer worth pursuing – including a stock you’re invested in that’s losing money or a job you don’t enjoy – you are missing out on something that will create more progress toward your goals. “Contrary to popular belief,” said Duke, “quitting will get you to where you want to go faster.”

3️. Monkeys and pedestals. Speaking of making progress, Duke favors a mental model called monkeys and pedestals from Astro Teller, the head of X, Google’s innovation lab, to serve as a guide for quitting sooner. “You have decided you want to make money by training a monkey to juggle flaming torches while standing on a pedestal in the town square,” she explained to Grant. “You should not build a pedestal first. You should see if you can train that monkey to juggle. Why? Because what’s the point? Literally, there’s no point in building the pedestal if you can’t train the monkey to juggle.” Pedestals are the part of the problem you know you can already solve and the hardest component is training the monkey. Tackling the monkey first gets you to “no” faster, limiting the time, effort and money that you sink into a project and making it easier to walk away.

4️. Kill criteria. Quitting has a bad reputation. So much so, that when you’re getting signs that you should quit something, often you dig in and work harder. Anything but quit! Duke suggests that you come up with a list of criteria for killing a project, changing your mind, or cutting your losses; a list of signals you might see in the future that would tell you it’s time to quit. This will help protect you against bad decision-making when you’re in the moment. “In poker, let’s say I’ve lost $2,000, and once I hit that mark, I have to get up and walk away,” she said. “You want to set a limit on how long you can continue to endure the situation that you’re in…Let’s say that you’re in a job where you’re incredibly unhappy and you’re feeling very unfulfilled… What are the signals? What are the things that you’re seeing that would tell you that, no, this is a persistent state and you should not be sticking around?” A common way to develop kill criteria: “If by (date), I have/haven’t (reached a particular state), I’ll quit.” Enlist a mentor – a.k.a. quitting coach – to hold you accountable.

5️. Diversify your portfolio. Just like investors want a diversified portfolio to protect against losses if an investment tanks, people should also embrace the power of options to be prepared for either a forced or voluntary quit. Don’t wait until you are letting go to start exploring your alternatives. “One of the goals for all of us should be to, as much as possible, maximize the diversification of interests, skills, and opportunities in each of our portfolios,” writes Duke, who was forced to stray from her academic course when she fell ill early in her career and soon after took up poker as a way to make money. “Even after you have found a path that you want to stick to, keep doing some exploration. Things change, and whatever you are doing now may not be the best path for you to pursue in the future. Having more options gives you something to switch to when the time is right.”

Why does quitting on time often feel like quitting too early?

How do you feel about quitting? Does this article (and Annie Duke’s book) prompt you to think differently about it? Why is quitting an important decision-making skill?

Share your story of quitting in the comment section of this article. How did you arrive at this decision? Were you motivated by “picking the right thing to stick to?”