The 3-D Printing Revolution: Students Make their own ‘Big Bang’ with Businesses

What do President Obama and Raj Koothrappali have in common? They’ve been talking recently about the wonders of 3-D printing. While many of us are not quite sure how this technology works, a group of California high school students is already developing its 3-D printing expertise in the business world – and preparing for successful careers.…Read More 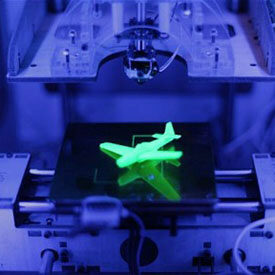 In case you haven’t noticed, 3-D is all the rage these days. Sure, you can brave the movie Texas Chainsaw in 3-D or even see a 3-D version of Oz the Great and Powerful, but in this case we’re talking about something more hands-on – 3-D printing. During his State of the Union address this month, U.S. President Barack Obama referred to a lab in Youngstown, Ohio, where “workers are mastering the 3-D printing that has the potential to revolutionize the way we make almost anything.” And how about those researchers at Cornell University who built an ear out of living cartilage cells with the help of a 3-D printer? Add that to the recent episode of TV’s “Big Bang Theory” where Howard Wolowitz and Raj Koothrappali created action figures of themselves on a 3-D printer, and you’ve definitely got some buzz around a technology.

Put a Lid on It

While it may be a while before we all have 3-D printers on our countertops, the excitement around 3-D printing – where designs are created using specialized computer software and sent to a high-tech printer, but instead of printing in ink, they print in plastic (and sometimes in metal) – has actually been building for years, grounded largely in the technology’s value to the business world. The most common corporate use for 3-D printing is rapid prototyping. Rather than spending millions on research and development to make a prototype of a new part or product, manufacturers can design them on computers and produce them much more quickly on their own 3-D printers. Companies like Sony Ericsson and New Balance use rapid prototyping extensively to test their phones and shoes before they ever get near the consumer market.

Think of the financial savings for businesses, says Vincent Uribe, 17 and a senior at Chico High School in Chico, Calif. “With a 3-D printer, you already know what the product looks like, how it’s going to work and how it moves. It really cuts costs in the manufacturing process if you avoid the trial and error of making it.”

Whereas most high school students have yet to hear of 3-D printing, Uribe and his classmates are on their way to becoming experts in the technology as they prepare for careers in engineering and architecture. Chico IT instructor Mike Bruggeman purchased his first 3-D printer in 2008 to better prepare students like Uribe, enrolled in his school-to-work program, for success in the field of engineering.

Soon, the local business community learned of the students’ hands-on 3-D training and wanted in on the available rapid prototyping. “Our first big break was a company called Kleen Kanteen, which makes an environmentally friendly stainless steel water bottle that is manufactured here in Chico,” notes Bruggeman, who has traveled to conferences in Florida and Texas to learn more about SolidWorks 3-D design software. “They had a lid design problem and were in China trying to get this manufactured with no success. We had just purchased our 3-D printer, so we designed the lid on our software, printed it on our printer and screwed it on.” The lid designs were taken to China and served as prototypes for the final production pieces. Other designs have been created and printed for Kleen Kanteen as well, and have become part of its new product lines.

Bruggeman now has two 3-D printers in the classroom and a team of engineering and architecture students who work regularly with nearby companies. Tyler Ceccato, a junior at Chico High, recalls first wanting to work with the school’s 3-D printers when he was in junior high. Following a few years of introductory courses, he got to work on the 3-D printer for the first time this school year. “As a class project, we designed a car that had moving parts,” says Ceccato, who is 17. “We got to make a six-inch car: Mine had moving wheels and a hood that came up. We learned about tolerances; how small the pieces should be so that they will actually spin and have [room] to move.”

Those design techniques have come in handy during Ceccato’s recent work with Westside Research, a local company that designs and manufactures cargo accessories for trucks and cars. “My partner and I created a mud flap on SolidWorks that you can attach to the hitch of a truck if you are towing a boat,” says Ceccato. “We used prototyping to develop the product. We could send it to the printer and actually print it out so we could touch it and see how it worked.” The product is currently being produced in China. “I want to go to school for engineering and I have a job in engineering. I have a huge advantage over everyone else,” adds Ceccato. “I will have used 3-D printers when people going into college won’t even know what they are yet.”

It’s hard to ignore 3-D printing technology’s hands-on appeal for students who are considering a variety of careers: Nothing replaces touching, tasting, experiencing a concept, especially if it is the design for your future.

In a corner of Bruggeman’s classroom, senior Olivia Somhegyi, 17, sits carefully painting 3-D-printed Bee-line buses and trees with foliage for a full-scale model of a proposed bus transit facility designed by TLCD Architecture Firm in Santa Rosa, Calif. “Our idea for making the model [on the 3-D printer] is so that somebody who doesn’t know the project well can see what it will look like. We’re trying to make it look as realistic as possible,” says Somhegyi, who took Bruggeman’s class to explore a potential career in architecture, which included an internship with TLCD. “The biggest part for me was learning what I like to do. Doing this project, I realize I still like architecture but I can’t see myself doing it. I’ve gone to a few meetings where there are 12 architects in one room and watched them sit back and plan ideas. That was really interesting, but it’s not for me. I’m really interested in environmental science and chemistry. That’s what I plan to major in when I go to college.”

What is rapid prototyping? What companies use this technology?

How can 3-D printers help businesses save money?

What type of work has Tyler Ceccato done for Westside Research?

How are 3-D printing and career preparation similar?

One comment on “The 3-D Printing Revolution: Students Make their own ‘Big Bang’ with Businesses”

Student Essay: My Summer Working for a Payday Lender