Inside the Electric Vehicle Market 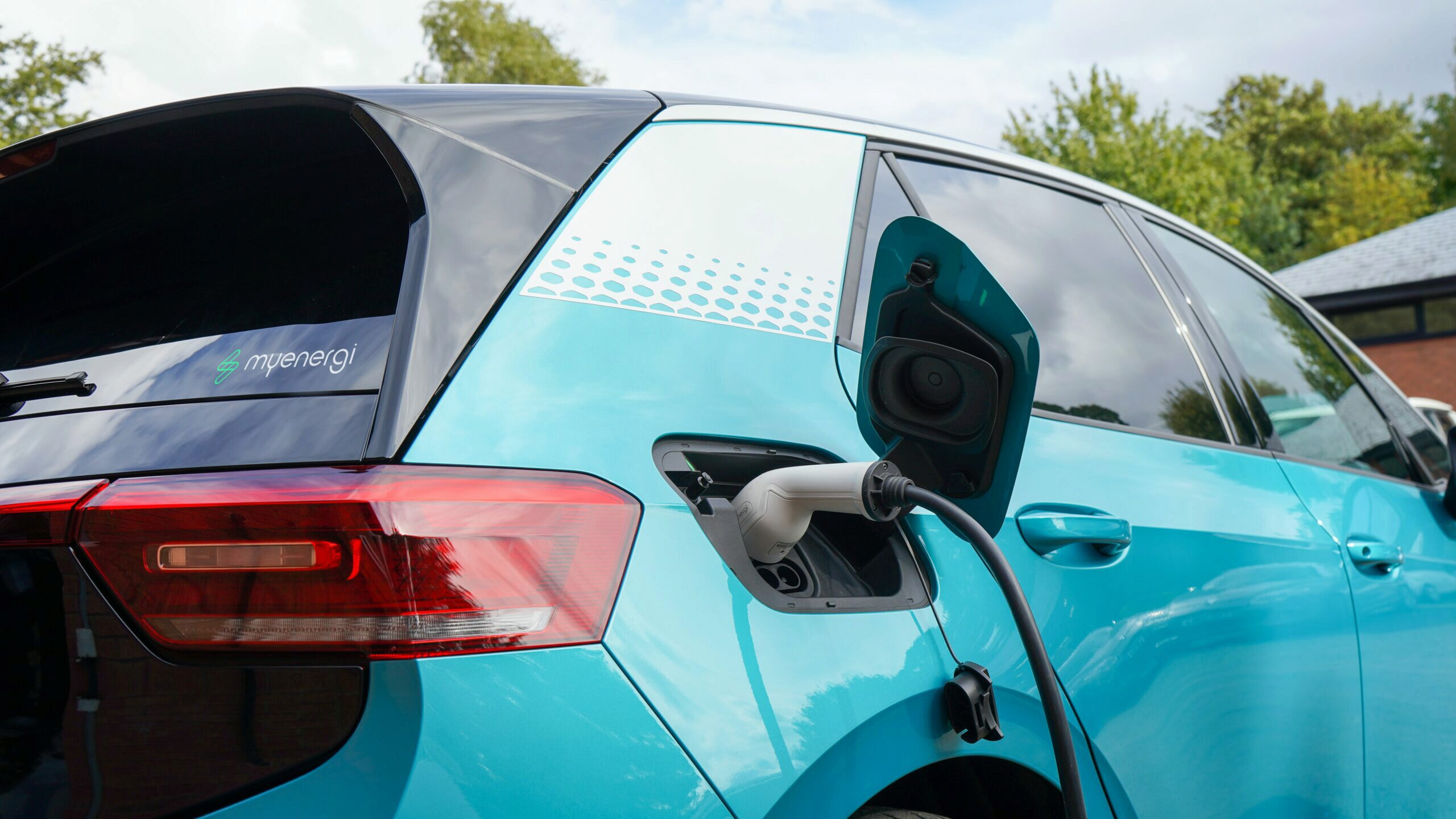 Attention, all you new and aspiring drivers. Are you planning to go electric? The data suggests that you are. A recent poll conducted by Cars.com, an online marketplace for vehicles, found that 56% of 1,000 respondents believe all teenage drivers will learn to drive an electric vehicle in the next 10 years. That’s you, behind the wheel, of a car that runs on battery power, not gasoline. As high school students who are just starting to drive and who care deeply about sustaining the health of our planet, the EV market has important implications. So, let’s dig in.

It’s an incredibly timely moment to be talking about the electric-vehicle industry, agree the experts, which is both in a period of dynamic development and central to tackling the problem of climate change — the long-term shifts in temperatures and weather patterns, mainly caused by human activities, especially the burning of fossil fuels from sources like gasoline used in traditional combustion engines.

The challenge? Moving a massive transportation system deeply dependent on gasoline to a system reliant on more climate-friendly energy sources, while ensuring safety and equity.

The good news is that the shift is happening. This is being prompted in part by urgency about climate change and governments pushing for faster movement toward reduced emissions. Electric vehicles have captured 7% of new car sales in the U.S.

“This is a really important moment in technology, policy and the marketplace,” says Genevieve Cullen, president of the Electric Drive Transportation Association, a U.S. business trade group that represents the entire value chain of electric transportation, including vehicle makers, electric-utility companies, companies in the materials supply chain (think lithium mining to make car batteries), and companies helping to build the EV infrastructure. “The future of transportation is electrification,” notes Cullen, who joined other EV experts recently during Penn Climate Week at the University of Pennsylvania for a panel on Cars and Climate: The Electric Vehicle Transformation.

Panelists agreed that the motivation to go electric comes from a variety of sources. “Transportation is the largest source of greenhouse-gas emissions (causing climate change), and you need to be electrified to address that,” adds Cullen. “This is where the global market is going, so if the United States wants to be a leader in the technology that’s going to drive the next century, we have to invest in electrification. This is also part of energy security. We have to have a different way of powering our transportation sector. Electrification is also essential to environmental equity. The communities that suffer the most from air pollution are often at-risk communities. By electrifying personal and commercial and public transportation, that’s how you get at better health outcomes in at-risk communities. There are a lot of reasons to do this.”

More signposts are guiding Americans toward widespread EV adoption, says John Paul MacDuffie, a Wharton School management professor who is a leading researcher of the auto industry and director of the Program on Vehicle and Mobility Innovation. Electric generation is becoming green faster than any other sector (think solar and wind energy), so anything that can be transitioned to electricity will advance emission-reduction goals faster — namely, cars.

According to MacDuffie, the market is tackling one of the biggest barriers to broader EV adoption — the high price of electric vehicles coming from only a few producers. “While most of the press has gone to Tesla and other startups, it’s now pretty clear that the incumbent automakers — the household names from internal-combustion engines — are going to have electric-vehicle models on the market,” says MacDuffie. “So, it’s not a situation where the incumbents in the old technology fail to make the transition and it’s taken over by newcomers. Everybody now agrees that GM, Ford, Volkswagen, Hyundai, eventually Toyota are going to have successful EVs.”

And those prices? They’re coming down, suggests MacDuffie. “Right now, there’s still a bit of an affordability problem, but that’s where companies like GM — in alliance with Honda — is pledging to bring out lower-cost vehicles,” he notes. “I don’t think we’re ever going to see very low-cost vehicles from Tesla. But the big automakers are used to making a lot of products in different segments for different types of customers. They’re going to be able to do that.”

Most plug-in hybrids (running on both electric and gasoline) and all-electric vehicles operate on lithium-ion batteries. Improved battery-cell chemistry is addressing some of the problems with sourcing raw minerals and metals. “You can read articles about how cobalt comes from the Congo with child labor and human rights abuses and how that is going to haunt the transition to electric vehicles,” says MacDuffie. “More and more, there is battery chemistry that doesn’t use any cobalt. All these batteries need lithium. Lithium, it turns out, is very plentiful in the earth, but the mining of it is lagging the demand. We’ll see a ton of investment in lithium, and there are some different models of how to extract lithium that are quite promising.”

MacDuffie adds that carmakers are starting to design the chassis – the frame on which a car is built – to include the necessary battery cells. Additional areas of the EV market that are ripe for innovative thinking: more convenient battery-charging stations and faster, more efficient EV manufacturing.

MacDuffie sees teenagers playing a valuable role in the future of EV – as innovators, as well as consumers. “I would say go try them out. The nice thing is that there are going to be a ton of models from lots of different automakers at lots of different price points,” he notes. “Even if you’re not sure you live in a situation where you can immediately use one (many young people are moving to cities to start their careers), it’s a great time to get out there and do test drives, find out what’s going on, and catch some of the excitement. Young people could be early adopters for this technology without really giving up anything. You can be more open to it and motivated by helping with the goal of reducing emissions and dealing with climate change. Why not get in on the ground floor of this exciting transition?” 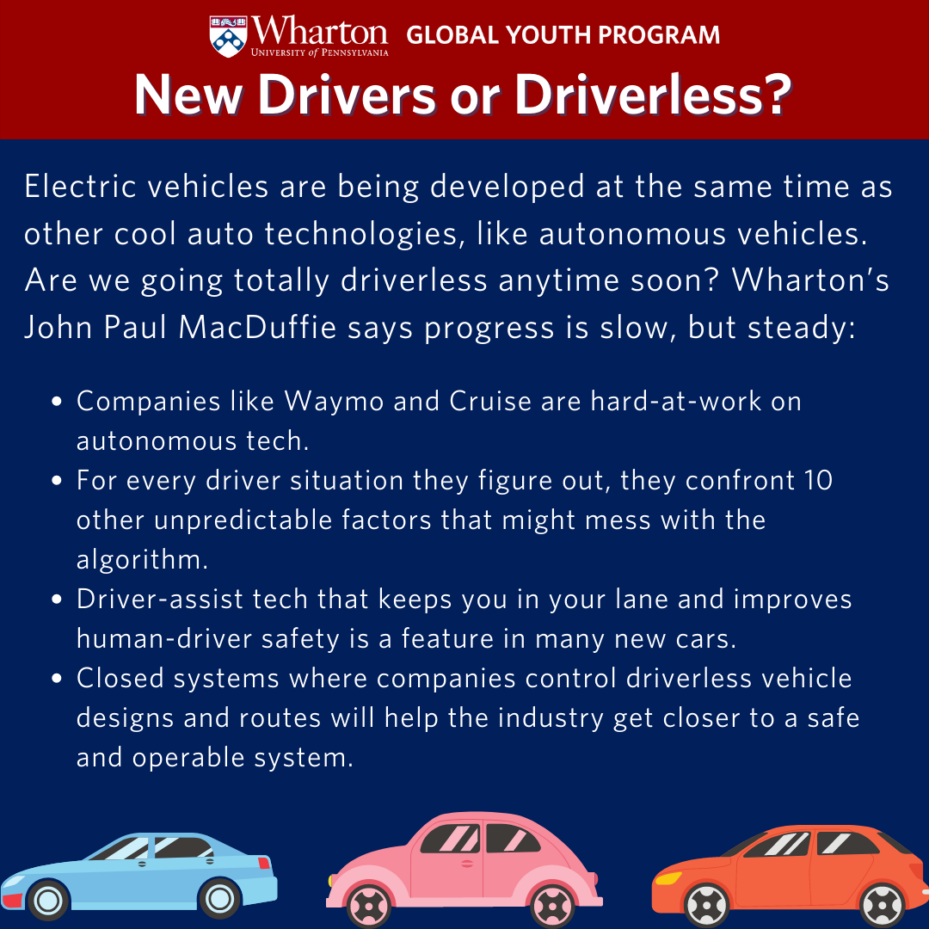 Why is it an incredibly timely moment to be talking about the electric-vehicle industry?

What are three ways that the electric-vehicle market and related technologies are evolving?

Dr. MacDuffie says teens should consider test-driving electric vehicles. Have you done this or do you plan to? Would you buy an electric vehicle? Share your story and your insights in the comment section of this article.