On November 30, Boeing, an airplane manufacturer, and the machinists’ union that represents many of its workers announced a tentative deal on a new labor contract between employer and union employees. The news may signal an end to a troubled relationship between the company and its union – and, according to one labor expert, has greater significance for the labor movement in the U.S. …Read More 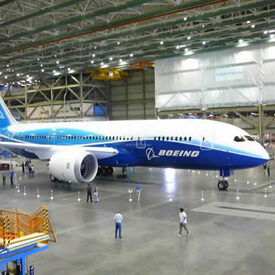 One of this week’s top business news stories had all the intrigue of a good action-drama movie — and may actually have a happy ending. First there is Boeing, an aerospace and defense company based in Chicago that is one of the world’s largest aircraft manufacturers, building and selling massive commercial airplanes like the Boeing 787 Dreamliner. Then there is the International Association of Machinists and Aerospace Workers, a trade union – an organization of workers that has banded together to achieve common goals like better working conditions or higher wages — that represents some 700,000 workers in North America, including many employees who help to make Boeing’s planes.

Boeing and the machinists’ labor union have battled often over the last several decades when union workers have made demands for things like better wages or benefit packages, and Boeing has initially refused those demands. Boeing’s machinists actually went on strike for 58 days in 2008 – meaning they refused to work — costing the company $1.8 billion.

This week’s news results from the latest dispute between employer and employee. It all started last year when the machinists’ union, representing workers at Boeing’s facility in Washington state, claimed that Boeing’s decision to create a second production line in a non-union facility in South Carolina to build its 787 Dreamliner airplane was the company’s way of punishing its unionized workers for past strikes. The union filed a charge with the National Labor Relations Board (NLRB), an agency of the U.S. government that protects the rights of private-sector employees to join together, with or without a union, to improve their wages or working conditions. This April, the NLRB issued an official legal complaint against Boeing, saying that the company violated labor laws by making statements to its employees that it would remove work from the Washington facility because the workers had gone on strike. The company denied this claim, countering that it created jobs in South Carolina for economic reasons. The lawsuit, which became a major political issue among presidential candidates, was to play out in court.

Now that lawsuit may be dropped. Boeing and the machinists’ union announced on November 30 that they had reached a tentative deal on a new four-year collective bargaining agreement, a labor contract between employer and union employees. The contract extension would raise wages for workers, improve pensions — which is income they will receive from the company after they retire — and add thousands of new assembly jobs in Washington state to build an updated version of Boeing’s 737 jet. Tom Wroblewski, the president of the local machinists’ union representing 28,000 Boeing workers, says that if the agreement is ratified, the union will notify the government that its “issues with the Boeing Company are behind us.”

Industry analysts have called this latest proposed contract unusually generous, signaling that Boeing may be eager to improve its strained relations with the machinists’ union. Ongoing strikes can take a financial toll on a business, especially when major competitors – in this case Airbus – are eager to service dissatisfied customers. “Often, strikes are symbolic and short because both sides have to look tough, but neither side wants a long strike because it loses orders and therefore loses jobs,” notes Philip Dine, a U.S. labor expert in Washington, D.C. and author of the book State of the Unions: How Labor Can Strengthen the Middle Class, Improve Our Economy, and Regain Political Influence. “They get tough but then they both make concessions and know they have to get back to work.”

According to Dine, strikes and aggressive unionism have declined in the U.S. as labor as a whole has weakened in the last several decades due to manufacturing jobs moving overseas. As the economy has struggled and unemployment has soared, it has become harder for labor to get traction. Still, the machinists’ union as it relates to Boeing remains strong. “It’s not like you can just replace Boeing’s workers,” says Dine. “Boeing’s workers are highly trained, the company works in national security, it has been doing well as a major exporter and it has to deliver [its planes] on time or it is going to lose contracts. For all those reasons, the unions have more of an advantage at Boeing than a lot of unions do elsewhere. That’s the major reason why they have been able to remain militant and aggressive even while a lot of [other] unions haven’t been able to.”

Even so, Dine contends that this week’s tentative outcome of the dispute between Boeing and the International Association of Machinists and Aerospace Workers is significant to the country’s larger labor movement – and the balance of power in the corporate world. “Labor is as relevant as ever,” suggests Dine. “People have confused the fact that it has gotten weaker over the years with supposed irrelevance. Why would it be that at a time when corporate influence is stronger than ever, suddenly workers can and should cope for themselves as individuals in the workplace? It defies common sense. A strong labor movement is good for the country and not just for the workers. One of the reasons for our prosperity and stability both politically and economically has been a strong industrial relations system where labor, management and government are all at the table and can voice their views. Nobody always wins and nobody always loses. Out of that, good agreements and public policies emerge.”

The Mask Challenge: Lessons from the Pandemic’s PPE Shortage