Are you an informed consumer? Champions of a nationwide competition for high school teams and individuals that tests consumer knowledge offer their advice on everything from dorm-room decorations – think ‘require’ over ‘desire’ -- to identity-theft prevention. …Read More 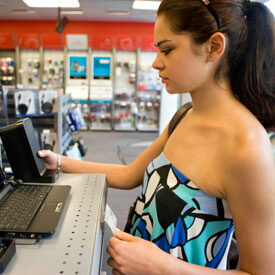 Consumer spending is the engine that drives the economy, and teenagers are a vital part of that engine. Teens averaged $5,000 of spending power per person in 2010, according to LifeSmarts, an educational arm of the National Consumers League in Washington, D.C. This money from parents and part-time work put a total of $125 billion in teenagers’ pockets last year — not counting the influence they exerted on family purchases of food, clothing and household items.

Learning to wield your spending power wisely can arm you with consumer skills that last a lifetime. “Asking intelligent questions and understanding the answers is what being a smart consumer is all about,” says Emily Stevenson, an educational consultant for LifeSmarts, which sponsors a nationwide competition for high school teams and individuals that tests their consumer savvy.

Dorm-room Decorations
A key to smart spending is knowing the difference between needs and wants. Take it from Hafsa Khanum, 18, an individual champion in the LifeSmarts competition in 2010 and a member of the Crosby High School team from Waterbury, Conn., that went to the national finals in 2011.

Khanum recently shopped for items to bring to the University of Connecticut, which she will attend in the fall, and found an entire section of the store set aside for dorm-room decorations. “The thing was that the list that was deemed ‘college necessities’ wasn’t really necessary,” she says. “Who truly needs three different chairs, seven throw pillows and a bag to store things in? No one. What we truly need is limited to what we cannot do without: food, water, shelter, clothes and these days a computer.”

Khanum wanted the chairs but bought books, bath towels and a laptop charger instead. “While it’s nice to get what you desire, it’s far more practical to get what you require,” she says. “It’s easier on the wallet and smart consumers won’t feel that they’ve wasted their money on non-essential items.”

Here are some additional hints to help you become a smart buyer:

Technology Hardware and Software. These are among the hottest items in stores these days. But do you really need that latest smart phone or tablet computer? “With the sheer amount of technology available, you must be able to sort out what’s useful,” says Evan Wilson, 19, who captained the Nickerson High School squad from Kansas that won the national LifeSmarts team championship in 2011. “There may be a brand new cell phone on the market, but if you just bought another model, do you really need the new one?”

How much technical support a product will receive is another consideration. Wilson recently shopped for an e-book reader and chose the Kindle from online retailer Amazon over the Nook from bookseller Barnes & Noble. He reasoned that Amazon would be around longer. “I don’t think that bookstores are going to last,” says Wilson, who plans to enter Pittsburgh State University in Pittsburgh, Kansas, this fall. “Digital distribution is becoming the norm in everything from books to movies.”

Health Care Items. “When it comes to medicine, the brand doesn’t matter as long as the active ingredients are the same,” says Khanum, who won the LifeSmarts test of “health and safety” knowledge last year. She recently went looking for over-the-counter eye drops and found one brand priced at $40 and another at $8. The choice became even more of a no-brainer when she compared the two labels and found that the active ingredients were exactly the same.

Nutrition. It may be hard to keep good nutrition in mind amid countless pitches for fast foods and tempting snacks and beverages. Khanum points to a popular five-hour energy drink that combines caffeine with high doses of vitamin and mineral supplements to keep users revved up. “It’s marketed toward teenagers, but is it really healthy to be kept awake with just one drink instead of having a balanced meal?” asks Khanum. Raising such questions can help to develop good nutritional habits.

Personal Finance. Many college-bound students finance their education through loans without knowing much about them. “When I started taking out loans to pay for college, I had no idea what they were,” Khanum says. She found that subsidized federal loans begin to accrue interest after students leave college, while unsubsidized private ones start earning interest right away. Khanum has since taken out both types of loans and plans to borrow one year at a time.

Preventing Identity Theft. Anyone who buys things over the Internet risks having his or her identity stolen by hackers or scam artists who prey on the unwary. But smart consumers can minimize this risk. Wilson advises doing business with secure websites that have “HTTPS” in their full online address. The “S” at the end indicates that credit card numbers and other important details will be encrypted to keep prying eyes from stealing them. Other safeguards include installing programs that block spyware that infects computers and collects personal information on the sly. “Everyone should know how to protect themselves from identity theft,” Wilson says.

This article tells us that a key to smart spending is knowing the difference between needs and wants. Why should this even matter? What did you learn about making this important distinction when you’re shopping?

How is the Internet affecting our consumer patterns and decisions? What is your vision for the future of shopping? Do you think we will ultimately purchase everything online? Get together with a group and discuss what the retail world will look like in 20 years.

4 comments on “Purchase Power: How to Make Smart Consumer Choices”

Mountain Guides Teach Us About Leadership

Venezuela’s Eugenia Carmona on the ‘Complete Chaos’ Afflicting Her Country