These days the business of art is a high-priced game that favors big-name collectibles, such as Andy Warhol’s “Statue of Liberty” and Mark Rothko’s “No. 1 (Royal Red and Blue).” And while auction powerhouses Christie’s and Sotheby’s expect a busy November, the global art market is feeling the effects of a weak economy. …Read More 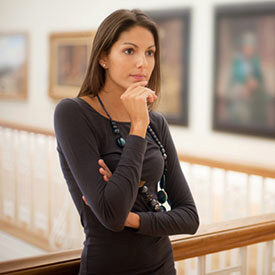 You have probably seen Pablo Picasso’s cubist violins or Andy Warhol’s Campbell’s Soup cans in posters, books or museums. Some people and companies actually own these seemingly priceless works and a whole industry, known as the art auction market, exists to support the buying and selling of fine art.

For those who have the money, it is actually possible to have a masterpiece hang in the living room. Take for instance, Andy Warhol’s “Statue of Liberty,” a silk-screened work of 24 images of the famous statue in red and green ink, which is priced to sell for $35 million at auction on November 14 by the art-auction powerhouse Christie’s. Claude Monet’s “Nympheas”, one of the artist’s paintings of water lilies, is also featured in Christie’s November sales and could sell for as much as $50 million.

‘A Rush of Consignments’

Christie’s, founded in 1766, has headquarters in London and New York City. The auction house currently boasts the highest number of sales for the first half of 2012 (about $3.5 billion), a record for any corresponding period in art market history. It promises to be a particularly busy – and potentially lucrative month – due to what Marc Porter, Christie’s America’s chairman, has called “a great rush of consignments for the November auctions.” Many collectors have decided to sell their works.

Christie’s is by no means safe at the top of its industry. With fluctuating prices and a traditionally volatile market, the competition is fierce. Besides Christie’s, the other dominant player in the art auction world is Sotheby’s, a multinational corporation that originated in England in 1744 and is now based in New York City. Sotheby’s involves everything from private sales to corporate art services, where the auction house helps companies build and value their corporate art collections. Sotheby’s is also the oldest publically traded company on the New York Stock Exchange under the ticker “BID.” Today, the firm has annual revenues of about $831.8 million. Topping its November art sales ticket? Mark Rothko’s “No. 1 (Royal Red and Blue),” which could sell for as much as $50 million.

Fine art is more than sport for collectors. It is also considered an investment – a safe haven for big money that is likely to sell at a higher price (and thus a profit for the owner) after years above the fireplace mantle. Yet in a period of economic turmoil, art takes the backseat to other, surer investments. Even for auction houses, it is hard to predict what pieces will actually sell in the art auction market from season to season. For instance, according to The Wall Street Journal, “Europeans are still in the game, dealers say, but they’re largely playing it safe this season — selling heirloom jewels as needed and buying pieces by older artists from their home countries whose values they trust will hold up.” While wealthier countries like Germany and Switzerland are buying artwork from national painters, Spanish and Italian works are not selling because those countries are struggling economically.

Asia, which was previously a huge player in the art market — with China Guardian Auctions and Beijing Poly International, two local auction houses that have boldly entered the Christie’s-Sotheby’s rivalry — has been on the decline. According to The Wall Street Journal, sales for Christie’s in Asia were down a quarter from last year during the first half of 2012, and estimated total sales for Sotheby’s during its upcoming Hong Kong auction are 31% lower than last year. Forbes magazine has named China’s dwindling economy, the political situation in mainland China, a lack of professionalism in Asian auctions and the systematic government crackdown on artistic expression as reasons for China’s slowing art market.

Because collectors want to get the most bang for their buck, they are less likely to take risks in purchasing art today. As The Wall Street Journal notes: “Collectors remain eager to splurge on masterpieces, but they are turning their noses up at anything that appears second-tier. That’s creating a top-heavy atmosphere that feels heady yet unstable — especially since the majority of artworks trade below the million-dollar mark, dealers say.”

That’s not to say that art isn’t selling, just that people are buying bigger names. According to Bloomberg, “A Gerhard Richter painting owned by musician Eric Clapton sold [in October] for a record 21.3 million pounds ($34.2 million) — more than 30 times what he paid for it in 2001.” The sale by Sotheby’s of the 1994 oil-on-canvas “Abstraktes Bild” broke the record for the highest selling work by a living artist. Bloomberg attributes Richter’s popularity to retrospectives of his work in London and Paris. His celebrity has also been bolstered by the documentary “Gerhard Richter Painting,” released last year.

“Anyone looking for an art-market savior this season should definitely keep an eye on the U.S.,” says The Wall Street Journal, “because its collectors have dominated just about every major sale in London and New York all year.” Also, according to The New York Times, although sales in China are on the decline, buyers and sellers alike should keep an eye on Southeastern Asia, especially Indonesia and Taiwan, where Westerners can enter the mix without heat from Chinese auction houses.

When less high-profile art does not sell, as in today’s tough economy, diamonds are an auction house’s best friend. Even in the worst markets — China included — people will continue to buy jewelry. According to The Wall Street Journal, “Few hard assets come in prettier packages or hold up as well under broader market pressure.”

What is Christie’s? Who is its biggest competitor?

Describe the activity in today’s Asian art market. What is influencing the market there?

Did musician Eric Clapton make a sound investment in fine art? How so?