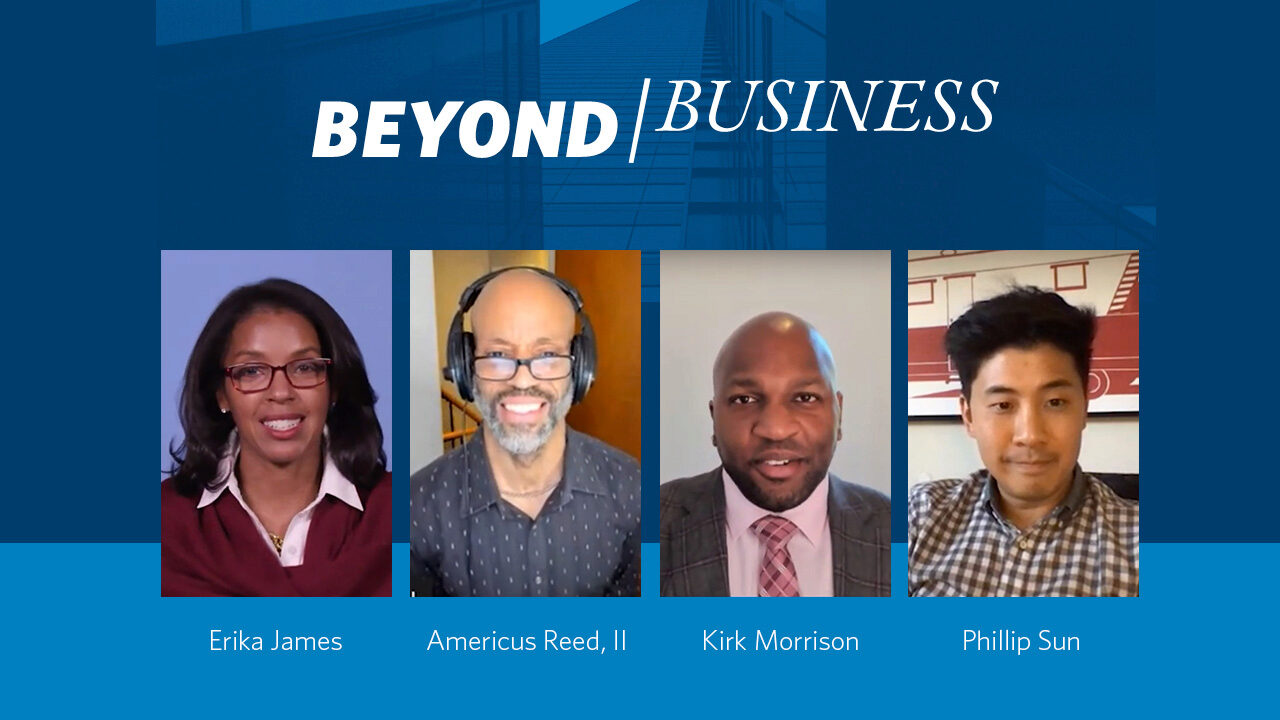 On Dec. 1, Erika James, dean of the Wharton School at the University of Pennsylvania, hosted the discussion, “Race & The Selling of America,” the third and final discussion addressing the impact of racism on business and society in Wharton’s Beyond Business series. Part of the School’s Tarnopol Dean’s Lecture Series, Beyond Business is streamed live on Wharton’s LinkedIn page.

Please visit the Wharton Global Youth Program’s latest Explore Business mini-site for high school students to find the full hour-long “Race & The Selling of America” video, as well as six shorter video segments, and activities and worksheets related to the themes in the discussion. We have created similar pages for the Dean’s previous conversations on “Race & Corporate Power” and “Race & the Entrepreneur.”

Below is a Knowledge@Wharton summary of some of the key points from the hour-long Race & The Selling of America discussion.

“I was kind of overwhelmed with emotion because I saw him walking off the field, and I knew it would be for the last time,” said Morrison, a former linebacker for the Oakland Raiders. “What he started back then is acceptable now. It was not acceptable back in 2016 because of where our country was at.”

A lot has changed since Kaepernick was pushed out of the NFL for kneeling during the national anthem to protest racial injustice. Now, instead of being silenced or shunned for being too controversial, more public figures are being asked to share their personal experiences with bigotry, discrimination and structural racism. Even the league has rebranded itself, apologizing for not listening to Black players, embracing messages of equality and pledging millions to social causes.

The cultural shift is also evident in Hollywood. The #OscarsSoWhite campaign that began five years ago has been putting steady pressure on an industry legendary for its lack of diversity in front of and behind the cameras.

“Anytime there’s a spotlight on just how non-inclusive any industry is, companies tend to react,” said Phillip Sun, president/managing partner and co-founder of M88, a talent representation firm focused on writers, actors, directors and producers of color.

Sun and Morrison joined Wharton Dean Erika James for a panel discussion about how diversity is reshaping businesses and brands. The December 1 discussion, titled “Race & The Selling of America,” was the final race-related segment of the Beyond Business series, which tackles the complex and pressing issues affecting individuals and organizations across the world. Wharton marketing professor Americus Reed served as moderator for the December 1 event.

“The awakening of what happened with George Floyd came at the perfect time…because we all had nowhere to go. We all were on lockdown…and we couldn’t turn the channel.” — Kirk Morrison, Broadcaster and Former NFL Linebacker

The Legacy of George Floyd

When George Floyd was killed by police in Minnesota in May, his death brought America’s simmering racial tensions to full boil. The coronavirus pandemic has kept those conversations on the front-burner.

“The awakening of what happened with George Floyd came at the perfect time,” Morrison said. “It was the perfect time because we all had nowhere to go. We all were on lockdown, and we couldn’t turn the channel.”

Sun agreed, saying the pandemic prevented any distractions from the truth about just how unfair the playing field is for people of color. Floyd’s death was the accelerant on a slow-burning fire that’s grown too big to ignore, even in Hollywood, he said.

These changes, along with the birth of his son, inspired Sun to leave his position as one of the first Asian-American partners in the powerhouse talent firm William Morris Endeavor and start his own agency with Charles D. King. Sun’s client roster includes Michael B. Jordan, Idris Elba, Naomi Scott, Rihanna and other entertainers of color. He sees his new firm – Black-owned and minority led – as a way to keep Hollywood accountable on inclusion.

“It just got a little bit tiresome feeling like diversity and inclusion was a policy or a program or an afterthought or a reaction,” Sun said. “We really wanted to build a firm that had those principles at the core, so you don’t have to push for them. They’re just there.”

Sun dismissed the idea that minority-owned and focused businesses are niche, pointing out that the majority of the world’s population is not white. Business is all about the bottom line, and in Hollywood that means content that sells. The newer generation is creating content around their own stories, and the public is clamoring for it. The paying audience is no longer just older white males, he said.

“At least in my generation for the first time, we’re using that superpower,” Sun said. “We know that we’re here. We have voices amplifying us.”

The ongoing dialogue on race is empowering athletes as well, Morrison said. Football players who previously may have been scared to speak their truth because of what happened to Kaepernick are no longer censoring themselves on political or social issues. Morrison said politics belongs in football because fame doesn’t insulate Black players from discrimination.

“It’s hard to ignore the fear that I still feel at times when [driving] home and… a cop pulls me over … and decides, ‘You fit the description.’” Morrison said. “That’s politics, and I can’t ignore what’s going on with that.”

That’s why Morrison launched a new radio program on SiriusXm called “Forward Progress,” which focuses on race, society and sports. He and Sun are using their platforms to educate others on the issues faced by disadvantaged groups, and they encouraged others to do the same. Mentorship, allyship and open conversations are key to gaining even more ground in the fight for fairness and inclusion, they said.

Morrison said he’s having more conversations than ever with executives who want to hear his perspective, and he exhorted others to ask questions, seek feedback, do their own research and keep talking.

Sun advised minorities to seek out white allies, particularly those in executive positions who can help bring about change.

Both Kirk Morrison and Phillip Sun say that many of the powerful people in their industries are now listening to the dialogue on diversity. These men took action toward change by starting a radio show and a new company. What actions have you taken in your own life to advance the conversation and lasting change around issues of diversity, equity and inclusion?

Choose either Phillip Sun or Kirk Morrison: What 5 questions would you ask them about their experiences with racism and the changes they are beginning to see in their industries?

Do you consider men like Colin Kaepernick, who has added civil rights activist to his pro football player bio, heroes? Why or why not?

Ken Tokusei Talks Technology and Ping-Pong from Inside Google Japan