Is Your Cell Phone a Fake?

On February 2, 2012, the federal government seized $400,000 in counterfeit NFL goods in New Jersey, as knock-off producers tried to capitalize on the hype surrounding the Super Bowl. When it comes to counterfeiting, any product of value can be copied and pawned off as the real thing, violating companies’ intellectual property rights and sometimes posing risks to consumers. …Read More 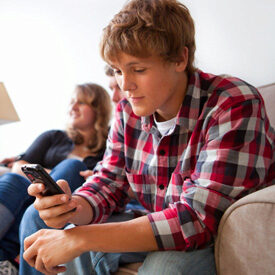 When New Jersey resident Jason Van Goor turned 13, he received what many of today’s teens consider a rite of passage: a cell phone. It has been two years since that benchmark birthday, and although not all of his friends have one, he says he personally considers it a valuable possession.

Van Goor, a student at Eastern Christian High School in North Haledon, N.J., is not alone in his valuation of the wireless device. A majority of teens view their cell phone as a key to their social life, according to the study, Teenagers: A Generation Unplugged, published by Harris Interactive. It’s been 29 years since the first commercial cell phone call was made, and in this short time frame, the cell phone has revolutionized communications for all age groups, but especially teens. The study postulates that four out of every five teens now carry a wireless device, estimating the cell-phone-touting teen crowd to be at 17 million.

But how many of these proud cell phone owners are unknowingly walking around with a fake? While Van Goor worries about other things like schoolwork and personal life, one thing he doesn’t concern himself with is the cell phone’s authenticity, he says. He confidently purchases from the kiosks at the mall. “I trust that the people at the Verizon store will not lead me astray,” he adds.

While many cell phones are purchased through reputable dealers, teens may also be tempted to seek out a deal online. Those who purchase devices from less reliable sources, like unrated dealers from auction sites and online marketplaces, could be getting a great bargain — or they could be purchasing a fake.

Cell phones are a hot commodity in the counterfeit trade. A counterfeit product, sometimes called a knock-off, is a false copy of the original. It violates a corporation’s Intellectual Property (IP). For example, it might disregard a trademarked name by unlawfully printing that brand name on a look-alike and usually inferior product. Having trouble picturing this? Imagine your neighbor Joe putting his soda recipe in a red can and calling it Coca-Cola. Because he’s calling it by a brand name he doesn’t own, that’s counterfeiting, also known as IP infringement. Any product of value can be copied and pawned off as the real thing, although some products are more infamous for counterfeiting than others.

“When I think of counterfeit products, fake designer purses come to mind,” says 18-year-old Nicole Woudenberg, a student at Berkeley College in New Jersey and a frequent visitor to New York City. “The only advantage to buying one is getting a bag that looks designer and costs pennies [compared to] what the real one costs, but I’m assuming the person purchasing the item could get arrested along with the person selling it.”

Like Woudenberg, many people have a narrow-minded view of the counterfeit trade, minimizing it to a few select products on a few city streets. The problem is much bigger than most think. Last year, U.S. government seizures of counterfeits and pirated goods grew to 24,792, representing a 24% increase from the year before and a 325% increase over the past decade. The total domestic value of the seized goods was $178.9 million. These were only the goods that were caught by authorities, meaning the illegal industry is much larger in scope.

Perhaps more alarming than the growing numbers are the dangers associated with counterfeit products. Whether it is human urine in fake fragrance, anti-freeze ingredients in knock-off toothpaste, or sawdust used in bogus bus parts, counterfeit articles pose a real and historically documented danger to the consumer. Links have also been drawn between counterfeits and funding of terror groups like Al Qaeda. What’s more, a robust counterfeit trade wreaks havoc on the economy, cheating brands and businesses out of much-needed cash.

“The trade in counterfeit and pirated goods robs Americans of jobs and puts their safety at risk, costs legitimate businesses billions of dollars in revenue, and fuels criminal activity,” says John Morton, director of the U.S. Immigration and Customs Enforcement.

So, just what gets counterfeited these days? Surprisingly, handbags don’t even make the top 10 list. The top item seized by the U.S. government for IP infringement was consumer electronics, according to 2011 statistics. Consumer electronics includes a variety of devices, but cell phones accounted for more than one-third of the category. Also included in the top 10 list were the following: pharmaceuticals, health/personal care items, eyewear/parts, critical technology components, electronic articles, cigarettes, fragrances, batteries, exercise equipment and transportation parts.

No matter what the product, those producing and selling counterfeit items, if caught, face legal woes. For example, last November, the publication Metro NY reported that the New York Police Department raided La La Fashion, a major supplier of counterfeit handbags to retailers in Chinatown and on Canal Street. More recently, in late January, the Denver Post reported that officials seized a truck loaded with $5.7 million in counterfeit Nike shoes and Louis Vuitton leather jackets and bags. The knockoffs were reportedly produced in China and imported to Los Angeles, and were being shipped to New York City. Proposed legislation in New York City would make the purchase of counterfeit products a misdemeanor, punishable by a $1,000 fine and/or a year in jail.

One way teens can protect themselves from purchasing a fake is to shop from vendors they trust. “It’s important to deal with reputable suppliers — to know where your products are coming from,” says Travis Johnson, vice president and director of legislative affairs and policy for The International AntiCounterfeiting Coalition. “This is becoming especially important in the online marketplace.”

Besides dealing with authorized retailers, another good rule of thumb is to trust your instincts, says Johnson. If the product looks or feels different than others you’ve seen, this should raise a red flag. And finally, says Johnson, always remember that, “If the price seems too good to be true, it probably is.”

What is intellectual property and why is it important to businesses?

How does the counterfeit trade hurt commerce? Consumers?

Should consumers be penalized for purchasing knockoffs? Why or why not?

One comment on “Is Your Cell Phone a Fake?”