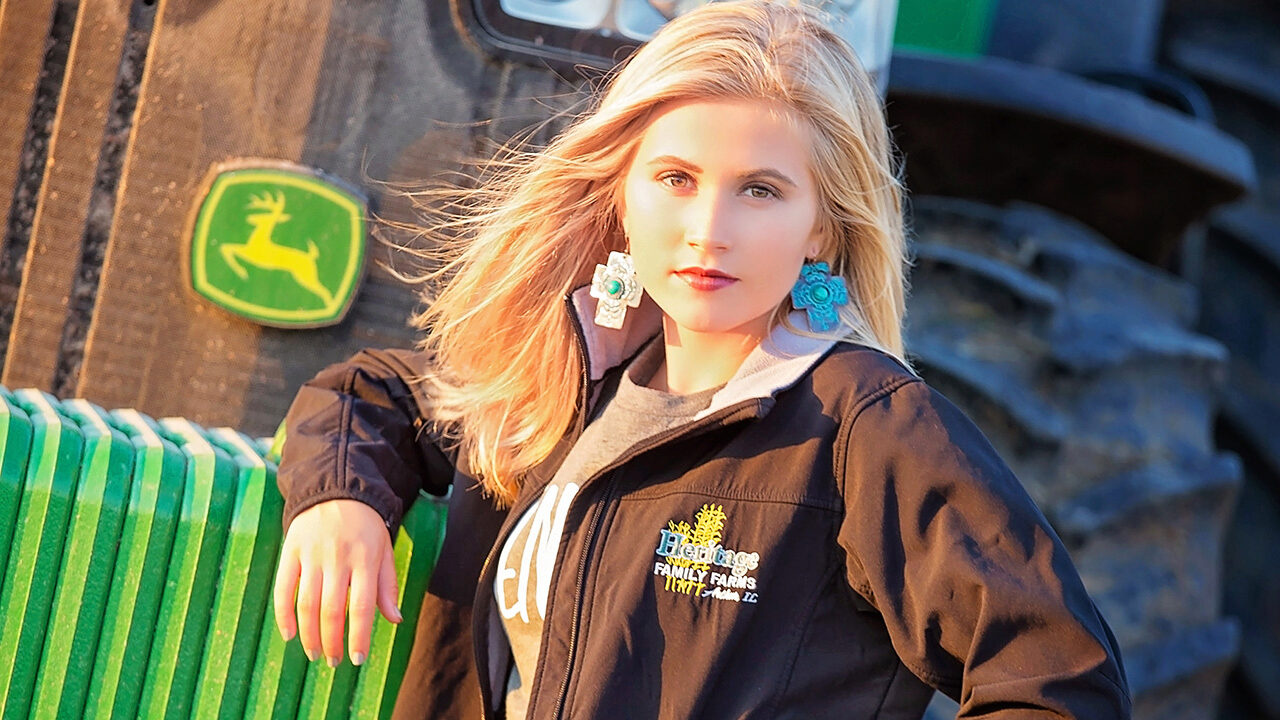 The John Deere tractor has long been a symbol of farming in the U.S. Its signature bright green and yellow colors are often silhouetted against a grand expanse of field or crop, emerging from dust clouds with motor rumbling and blades spinning.

That’s why on May 17 it was most telling when Deere & Co., the farm supply company that makes and sells those tractors, threshers and much more for the agriculture industry, announced a cautious financial forecast and dwindling earnings. The company cut earnings and sales growth projections for 2019 and reported second-quarter earnings that came in under estimates for a fifth straight quarter. What’s more, it is cutting production by 20% at two of its largest factories. This financial news all points to one thing: U.S. farmers are struggling.

An ‘Agvocate’ for Her Industry

In states like Iowa, Nebraska, Minnesota and Illinois, where the economy depends heavily on the farming business, many farmers can’t afford these days to buy new John Deere equipment. The Morning Brew business newsletter points to three main reasons for this: technologically improved fertilizer and seeds that have led to a global oversupply of crops, driving prices down and resulting in less money for farmers selling what they produce; bad Midwest weather that delayed planting; and the escalating trade war with China.

This third factor has been dominating recent headlines. Last week, China said it planned to raise tariffs (government taxes on imports and exports) on $60 billion of U.S. goods as retaliation for U.S. President Donald Trump’s previous move to hike tariffs on $200 billion of Chinese goods. As each country makes its latest move, the fallout continues, for businesses and the U.S. stock market. Amid trade-war tumult, the Dow Jones Industrial Average plunged more than 600 points in a day, the worst one-day drop since January.

America’s Farmers are casualties of this trade war. Prior to the trade war, China and Hong Kong combined were the second-largest export market for U.S. pork. Chinese pork buyers have cancelled thousands of metric tons of U.S. pork orders in the escalating tariff exchange of the last few weeks, eroding the $6.5 billion market for American pork. China is also the No. 1 global buyer of soybeans. Throughout this tariff exchange with the U.S., China has capped U.S. imports of the product. That is to say that the country is limiting shipments of soybeans into its markets from the U.S.

In a recent opinion piece, Davie Stephens, president of the American Soybean Association, said, “Trade is the lifeblood of the U.S. soybean industry, and right now it is ebbing away as soybean growers are unduly caught in the crossfire of the U.S.-China trade war…the effects of the prolonged trade war have already caused soybean prices to fall to levels at which any sale only locks in a loss.” Millions of Chinese consumers, who once bought about 60% of American agriculture exports, have stopped buying their products. Added Stephens: “As we plant our 2019 crop, unsold soybean supplies are expected to double before harvest begins in September, further depressing prices and forcing older farmers to consider retiring early to protect their equity and younger ones to look for other careers.”

Makenna Green, 18, says she is not going anywhere. As the sixth generation to grow up and live on her family’s row crop farm in East Central Illinois, the recent Arthur Lovington Atwood Hammond High School grad is headed to Lake Land Community College in Mattoon, Illinois, this fall to work toward an advanced degree in crop science.

Green’s family business, Heritage Family Farms, specializes in corn and soybeans. A member of the FFA and a dedicated farmer, Green has been closely watching the tariff wars over the past few years. She says that she is passionate about agriculture and regularly “agvocates” for the future of farming in America.

Green has had to learn a lot about tariffs and trade to understand how these global economic negotiations are affecting her family’s livelihood, and to speak out with an educated voice. “When China raises their tariffs, it costs more money to market a product to China and vice versa. In reality no one wants to pay that extra money, which in the end closes off the market,” notes Green, who stresses that she agrees with President Trump’s trade approach, but not his timing in an already-fragile agriculture economy.

“We export or sell a bunch of agriculture products to China. With their already high tariffs, and even higher tariffs after this trade war, there is a decreasing market to China,” adds Green. “The problem is that American farmers are really good at what they do. We produce a surplus of products. This decreasing market coupled with a surplus of products means that the prices on our supply and demand-driven markets are not going to be good. Right now, the prices are so bad that many farmers are not even making their break-even prices, meaning they are losing money on their crops. Farmers are struggling. Big time. In the beginning the idea that we would get better prices and deals for our exported goods was something that many farmers in my area believed could be a good thing. At this point, though, farmers are losing hope.”

Taking a ‘Hit Through It All’

Scott Ashby, 17 and a rising senior at Carroll Jr. Sr. High School in Carroll County, Indiana, is a third-generation family grain farmer. He says that the open land in places like Carroll County, which has 13 hogs to every two people, allows for a lot of farming diversity with crops as well as livestock. As a member of the FFA, Ashby believes he has a duty to inform people about the issues that affect farmers. “Almost everything in the world can be related back to agriculture,” he says. “One decision can impact the entire world. You get a year like this with high rain values in Indiana and farmers have to push back planting. The next thing you know, not only does the nation but the entire world see higher prices due to the shortage of corn, soybeans and wheat that we failed to produce.”

“Everyone needs a farmer every day all day for food, fiber and fuel. Without this industry, no one would eat.” — Makenna Green

While the U.S.-China trade war impacts farming decisions that Ashby and his family make every day, he points out that their awareness of the global economic climate is a fundamental part of their job. “The U.S. farmer has been affected by the tariffs for a number of years through many different administrations, from things as simple as increased prices on over-the-counter parts at the dealership, due to shipping tariffs and importation costs, to reduced commodity prices. Farmers have taken a hit through it all,” notes Ashby.

Surviving in the agriculture business means learning to adapt – and cuts costs, he adds. “We have responded to the trade war by holding our equipment over longer periods of time instead of trading up, along with doing more repairs ourselves or hiring outside mechanics not affiliated with a dealership to cut those costs,” Ashby says. “We are also holding our grain for a longer period of time trying to wait it out for higher prices.”

The U.S.-China trade war has spotlighted the struggles of farmers in the U.S., and both Green and Ashby want their generation to understand what hardships in agriculture mean for the country and the world. “Agriculture is the largest industry in Illinois and is one of the largest in the country. One in four people will go into a job related to agriculture,” says Green, who was chosen as a national finalist last year in grain-production entrepreneurship. “Everyone needs a farmer every day all day for food, fiber and fuel. Without this industry, no one would eat, and the United States’ economy would struggle. Times are tough now, and getting tougher. This is making coming back to the farm less and less attractive for young farmers. This is scary as the age of the U.S farmer is on the rise. We need farmers! We need family farms! They are the backbone of America and keep food on our tables and clothes on our backs. If we don’t support farms and keep their doors open, it’s hard to tell what will happen to the entire economy of the United States and the world.”

Ashby echoes those sentiments, and adds that he believes in the foundation of farming as family businesses working and prospering through a connection with and appreciation for the land. “There will always be a future in agriculture; the only thing that concerns me is what that future looks like,” says Ashby. “We already see big businesses infiltrating everything we do, from Monsanto buying out all of the competition across the globe, to companies such as Red Gold investing in their own ground and hiring farmers to tend to and produce a crop off of it, while [Red Gold] collects the main profits. There are also issues like mislabeling of consumer-related goods, such as General Mills saying that their wheat is non-GMO, while in fact wheat has never been genetically modified. Also, it is legal to label lab-grown meat as real meat, when by the Merriam-Webster dictionary, the term meat is defined as the flesh of an animal (particularly mammal) used as food. Ag may never look the same if we do not do our part to cure these myths and set the story straight about what agriculture truly is.”

Scott Ashby says, “There will always be a future in agriculture; the only thing that concerns me is what that future looks like. We already see big businesses infiltrating everything we do.” There are two sides to this argument. Some would say that technology and big business are improving farming in lots of ways, not hurting it. Using the Related KWHS Stories and Related Links tabs accompanying this article, explore how the agriculture business is changing. Discuss with a class or in a group.

Did this article teach you anything about the agriculture business? What did you learn? What questions do you still have?

Are you a member of the FFA? If so, what do you want the world to know about how the trade wars are affecting industries in your country? Log in and share your experiences and insights in the comment section of this article.

15 comments on “How the Trade War with China Is Hurting U.S. Farmers”