African football (soccer) player and high school student Muna Yussuf would like to add sports business entrepreneur to her credits. During a recent Wharton visit, Yussuf sat down with KWHS to discuss some of her ideas for improving the sports infrastructure in Africa -- with the help of innovative thinking and social media.…Read More 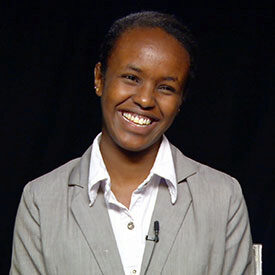 Maimuna “Muna” Abdi Yussuf, 19, is a senior at the African Leadership Academy in Johannesburg, South Africa, where she also acts as a school ambassador, escorting guests, donors and school partners around campus. Muna and several of her classmates came up with the idea to create an African Sports Academy to help nurture and develop sports talent in Africa. Knowledge@Wharton High School spoke with Yussuf on the Wharton campus a few months back — while she was attending the Wharton Sports Business Academy (WSBA) for high school students interested in sports-related careers — to talk about what she sees as key weaknesses in the sports infrastructure in Africa, and specifically in her home country, Kenya.

Knowledge@Wharton High School: Muna, thank you for joining us today.

Muna Yussuf: Thank you very much for having me.

KWHS: Do you play sports back home and what do you play?

Yussuf: I do. As a child growing up, I did a lot of swimming and a bit of track. In Kenya, track and cross-country are very big. I did that for a while until I got to high school. And then I started playing soccer. I’m in school at the African Leadership Academy, and I’m part of the girl’s soccer team. I play as an attacking midfielder.

KWHS: Do you note any differences between soccer in Africa and the U.S.?

Yussuf: I think the major difference about soccer here and in Africa is that most people who are soccer fans [in Africa] don’t watch the American soccer league, but mostly focus on the European leagues. As for American soccer fans, they watch both the English Premier League [a professional league for soccer clubs in England and Wales] and the other European leagues and they have their own local leagues, as well.

KWHS: I see, so they’re more global about it.

Yussuf: They’re more global about it. And a lot of African sports fans and soccer fans don’t focus too much on the local leagues. They’re very focused on the international leagues, and that’s actually a very big problem back home, I think. And we should try to solve that. But for the Americans, it’s very good. I’ve noticed that they take an interest in their own leagues, as well.

KWHS: Tell us about meeting the managing director of the Kaizer Chiefs, which is one of the most successful sports clubs in South Africa. What did you learn about the importance of sports team management?

Yussuf: It was part of this executive seminar we usually have in my school, and we have guest speakers come over. He was the guest speaker that day. The Kaizer Chiefs is one of the most successful soccer teams in the PSL, which is the South African soccer league. And he was speaking about managing the team and trying to make it grow. He talked a bit about the history — the founder of the club is called Kaizer — how he started it and how he was trying to propel it. He got a few players, put them together and went around South Africa playing other teams, and that’s how it grew. [I learned how ethical and effective management is integral to the success of a sports team].

He talked a bit about the logistics and the importance of fans and getting them to come to the games. He also talked a lot about the youth and their role in the sports industry in South Africa. He mentioned how they do a lot of talent scouting and how they have an interest in the development of talent and also the role of education for players. In soccer, most players don’t continue with their schooling as they get more and more into the sport.

KWHS: Even in high school they would [drop out of school]?

Yussuf: Even in high school they would do that. He mentioned that they try to make sure that [players] go to school, but they also play soccer. That way it’s a balance between their talent and education. I learned a bit about how they go about supporting this talent and developing them, and how strong their youth support system is in the club.

KWHS: How do you define entrepreneurship in sports?

Yussuf: Entrepreneurship in sports for me would be innovation in the sports industry. There are so many different ways to look at it in the sense that sports is a social enterprise. And when you’re focusing on people, there are so many different areas you can look at. There’s the technological aspect, and there’s obviously game experience on a personal level. [When thinking about] entrepreneurship in sports, there are ideas that come to my head in terms of facilities management.

When I was applying to the WSBA program, I wrote about different types of ideas that can be put in place, like how different sports fans can buy merchandise everywhere [through a website that sells licensed sports merchandise]. They can go to a sports academy that takes on talented people from different sports, where they can do their sports, as well as continue with their education. So, entrepreneurship is very wide. There’s a lot of potential.

Yussuf: The first thing that is [lacking] back home is that there’s not so much focus in the local leagues. Everyone has this great passion for sports, right? Mostly it’s soccer, which we call football back home. Everyone has this great love for football. And the focus is on the English Premier League. No one really cares about the Kenyan Premier League or [other local African leagues].

In South Africa, it’s a bit different because people will go for the games. But in Kenya, which is my home country, it’s not really the case. So the first problem is getting people to focus back to their local leagues and support [them]. Coming here and learning about the sports industry here, I’ve gotten more insight on how to improve things back home in terms of facilities and the technology used. The media is also not that much involved in the games that go on at home. So the opportunity is to expand in terms of media, as well.

The talent is there and it’s not being [developed], as well. Most Kenyans focus on football and track. But others have a passion for basketball [and] don’t really have the avenues to try to develop those talents. Cricket, as well. Swimming not so much because the facilities are not really available to people who can’t afford them.

I think it’s about trying to develop the talent and actually make people better in [Africa’s sports] industry. If we could do that back home, that would be the starting point. And then people would get back behind their local teams, which would make the industry grow.

KWHS: What do you see as your role in that endeavor?

Yussuf: In my school, we have this entrepreneurship class, and a few friends of mine came up with the idea for a sports academy. We could get people who are talented and really passionate about their sports and try to develop them and [help] their talents grow. [We would give] them opportunities to become professionals in the sports industry.

We thought of starting small leagues — just getting a few teams together, asking them to give in a bit of money and they can play for it together. So the winner takes most of the money and a bit of it can go to the expenses that we incurred while running the league. In my school, that’s one of the activities that we’re trying to carry out as part of the sports department there.

KWHS: Where do you see yourself in five to 10 years? In a sports business career?

Yussuf: In a sports business — I hope so. I really hope so. It’s a very hard question. Five to 10 years down the line?

KWHS: If you had an ideal job title or some area within the sports business that you would like to focus on, what would that be?

Yussuf: In five to 10 years, because I have an interest in football, working for FIFA [International Federation of Football Associations] would be ideal, but on the African continent. I don’t have an interest in going to work outside the African continent because the potential is back home, and growing [football there] is ideal for me. A possible area to start would be the Confederations Cup, [which is] where the best teams in each country get together and play against each other. [I would like to] expand on that and try to get more publicity about it back home and get more fans involved. Also, somehow organizing the African Cup, [which is] where the countries get together and play to be the African champions. That would be very good as well. That is fairly successful, but I think there’s more potential for growth in that area.

Also, [I want to be involved in] talent development and trying to start this sports academy. I’m working with a few minor leagues in Kenya. There’s potential there too.

KWHS: You also have a passion for writing and editing, I understand.

KWHS: Tell us about that. And how do you feel the growth of social media is affecting sports? Have you given some thought to that?

Yussuf: Yes, definitely. Social media is a very powerful tool these days. Back in school we started ALAian Life, the online publication for the school. [The blog] is completely run by the students. We report on different events and occurrences in school life and the community. And in sports, it’s very important. [There are] so many different types of social media like Facebook and Twitter and YouTube that are powerful tools [for sports] because they spread information [quickly].

For example, yesterday we had a guest talk from the athletics director at Penn. She was talking about the different types of teams they have here. When they have the games, they tweet about what’s going on. That way, people back here at Penn can [follow] how the game is going. That’s important in the sense that the information is getting out and it brings in more fan participation and more publicity for the teams.

KWHS: Do you feel there’s potential for growth in that way in Africa?

Yussuf: Yes, definitely. Facebook is the thing back home right now. Twitter [is still] growing. If teams could utilize social media even more back home, it would be ideal. For example, in the Kenyan Premier League, they started using [social media]. Gor Mahia, the champions of the Kenyan Premier League, use Facebook a lot to try to reach out to their fans and let them know what’s going on. And they post on their Facebook page. That brings in a lot of fan participation. There’s definitely room for [social media] growth in almost all sports [in Africa].

KWHS: Thank you very much for talking with us today.

Yussuf: Thank you very much.