San Fran Giants CIO Bill Schlough: ‘The Business Side Can Be Just as Exciting’

As senior vice president and chief information officer of the San Francisco Giants baseball team, Bill Schlough “keeps the lights on” for all the team’s technical needs. He recently spoke to Knowledge@Wharton High School about how he came to work in his high school dream job – even though he wasn’t a great athlete – and why it’s important to be geographically flexible if you want a job in the sports business.…Read More 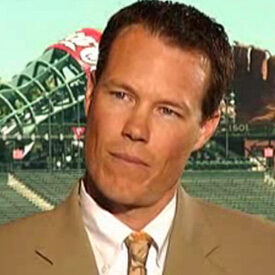 Bill Schlough has never had an at bat or thrown a pitch for the San Francisco Giants, the 2010 World Champions of Major League Baseball, but he is integral to the team’s success. As senior vice president and chief information officer, he “keeps the lights on” for all the team’s technical needs. In the past, that might mean just traditional tech support for those folks in the big offices, but as the Internet and other technical areas have affected business, sports teams are connected in all kinds of ways. Marketing, in-stadium entertainment, scoreboards, tracking of players and their data and social networking have become vital commodities in big-time, and even small-time, sports, making Schlough’s tech skills that much more in-demand. Schlough is also the interim president of the Giants’ San Jose minor-league affiliate, using the technology and business experience he has learned to run a team just below the major-league level.

“Even back in high school I was interested in sports, but didn’t think it could be a career, especially since I wasn’t a very good athlete,” says Schlough, “But somehow I found a way.” Schlough, a recent panelist at The Ivy Sports Symposium at Wharton, spoke to Knowledge@Wharton High School about pursuing sports-related jobs off the field.

Knowledge@Wharton High School: When did you know you could have a career in sports? How did you prepare yourself for it?

Bill Schlough: Everything about sports was what I wanted out of life: developing teamwork, achievement and leadership. Though I didn’t play varsity sports in high school, when I got to Duke [University], club sports were big. I was on a softball club that traveled around the country, I was on a crew club and I even snow-ski raced. I got involved with the administration of club sports at Duke, learned about funding these things, and eventually won the award for the person who had done the most for athletics at Duke.

I applied half-heartedly for jobs in sports out of college, but I had trained as an engineer, so I abandoned the idea and took a job in consulting. Then I was working in Detroit and discovered that while I was consulting in aerospace and retail, there were also sports businesses where I could consult. I did tech work at Stanford Stadium for World Cup Soccer in 1994, then worked for the 1996 Summer Olympics in Atlanta, and then went on from there. It has been 18 years now, and I have been able to work in my high school dream job — in the last decade with the Giants.

KWHS: What do you find exciting about your part in the Giants team?

Schlough: [My job doesn’t involve] assessing player talent, yet I hope I do things that enhance the game. My job is to find how technology can make us money, win more games and improve the fan experience [for example, helping to bring a $3 million, high-definition scoreboard that stands 103 feet long and about 21 feet wide to the Giants’ AT&T Park]. I have no playing experience, true, but the business side can be just as exciting when you know you are contributing to a winning team.

KWHS: What is different about your job as president of the San Jose Giants? How are the minor leagues different than the majors?

Schlough: It is interesting to be the boss and have the ability to oversee all of the business operations. It might even be easier to be the boss than in management, because what you decide is final. People are more willing to listen to your side of the story if you are the ultimate boss. It is kind of cool, but you definitely have to cut your teeth in the business and work your way up.

We have 150 to 175 people at the San Francisco Giants, but not even half [that number] in San Jose. Everyone wears many hats and everyone gets to learn everything. The work ethic for people in minor-league baseball is amazing. Most of them are working their way up to the major leagues, so they are willing to try most anything.

KWHS: What do you suggest for people who want to have a career in sports?

Schlough: First of all, it is good to be geographically flexible. If you decide you want to be in a certain city, there may not be enough jobs right there, especially at an entry level. If you are willing to move, there are many teams around the country – and now globally. Because people move up, there is a lot of turnover. If you can be agile, that is good.

The more things you know about business in general, and sports in specific, the better off you are. I was just an engineer, but I used what I knew to get into the business. There are plenty of opportunities for people with this passion.