Soon after launching an online clothing business in Boston, Fan Bi, Danny Wong and Alec Harrison discovered that they needed to be closer to their suppliers – Asian garment makers -- if the venture was going to be successful. All three moved for the summer to Shanghai, China. Knowledge@Wharton High School talks to Bi about the partners’ global entrepreneurial experience.…Read More 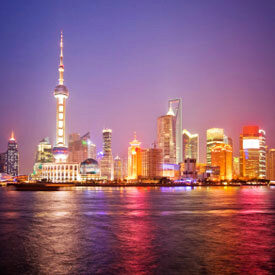 In early 2009, Fan Bi, 23, Danny Wong, 19, and Alec Harrison, 24, lived in the Boston area but had never met. By summer 2010, they were sharing a three-room apartment in Shanghai, China, and were co-partners in Blank Label, an online men’s clothing startup that allows customers to create custom dress shirts. A fourth partner, Zeeshan Muhammad, handles the technology and works with them via online tools. The young men spent their summer meeting with Asian garment makers and fine-tuning their business.

The partners have since ended their Shanghai adventure, although all three are still with the company. Harrison stayed in Shanghai, Wong went back to school and Bi, who met his partners during a year’s study at Babson College in Boston, has left the University of New South Wales in Sydney, Australia, to work full time on Blank Label.

The company, which used Bi’s personal savings as seed money, is now breaking even and has six full-time employees. The goal is to increase the customer repeat rate and improve the website before shifting into high-growth mode. While Bi will spend about three months a year in Shanghai meeting with vendors, the partners have no plans to reconvene in China.

Fan Bi: The original idea came about in summer 2008. I was in Shanghai [Bi speaks Mandarin Chinese and was visiting family in China] and I kept coming across custom shirts made there. It was a different experience in shopping and relatively affordable. My idea wasn’t to do it online, just to start something in custom clothing. The first iteration was selling custom shirts and suits to graduating college students. I met Danny when I posted a job for a salesman in spring 2009.

I ran the campus model for four or five months and it had legs, so I decided I wanted to do it online. That’s how we found Alec – we posted a job for a graphic designer. He’d just graduated college and hated his day job, so he came on to try and launch this e-commerce business. None of us were programmers, so another job posting led us to Zee, and the four of us started off.

KWHS: When did you realize you needed to relocate to Shanghai?

Bi: We launched online around Halloween 2009 and started getting some orders. I very quickly realized what we thought were established relationships with our suppliers were very frail. I was going to have to build relationships on the ground and get some better quality control.

KWHS: That could have been a two-week trip. Why relocate to China?

Bi: First, it’s relatively cheap to live there — we could each live on about $700 a month. That’s also where our manufacturers are. If your pain point is technology, then you need to go in and work with your programmer. Our site was improving, so the pain point was our operations team. It was a matter of necessity.

KWHS: What did you gain from physically being in China?

Bi: The human contact. When you’re starting out, the larger vendors who are more versed in globalized communications aren’t as interested in talking to you. The smaller firms — you have to be on the ground to find those.

KWHS: What did you learn about your suppliers while in China?

Bi: The manufacturers had a lot of inherent problems — like the acceptance of quality measures, a lack of willingness to stick to agreed specifications and an inability to meet deadlines. Finding suppliers isn’t that difficult because everyone in China wants your business. Finding the right suppliers is like finding the right co-founders or employees: It requires a very detailed understanding of what that role entails.

KWHS: What steps did you take to improve your business?

Bi: What really helped was hiring the right people to work with the manufacturers. We brought on an external consultant who found our current manufacturer, we hired a quality control person who works at the production facility but is on our payroll, and we have an operations manager who deals with the manufacturer on a daily basis.

KWHS: What advice would you give young people who are thinking about starting their own business?

Bi: It’s not how small you start, it’s how big you end up. We always wanted to build a big ship, but we decided it was okay if that took 10 or 15 years.

You definitely need to have that drive to keep going at all costs. You make a lot of sacrifices – your health, your friends, your relationships, your salary. You have to be focused on what is the most important thing at the end of the day and dedicate as much of yourself to it as you possibly can. Realistically, that’s just the beginning of the process. Hard work buys you a ticket, but from there you’ve got to be smart.

The Conversation: Investing with a Gender Lens