While some teens have spent the summer as camp counselors, still others are taking a more high-tech hiatus from school as they prepare for computer science studies and careers as computer programmers. KWHS checks in with a few students who designed iPhone game apps in Palo Alto, Calif., with the help of a Silicon Valley startup.…Read More 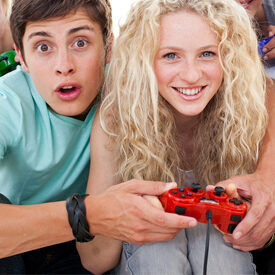 Playing games for a living? Students in California are trying that career on for size this summer at MakeGamesWithUs (MGWU), a startup in Palo Alto, a city that is home to many Silicon Valley high-tech companies.

MGWU, started nearly two years ago, runs a website to help people learn about designing iPhone game applications — think of the popular app Angry Birds — through free online tutorials that focus on game-development skills like programming and design. Visitors to the site can develop actual games, to which MGWU adds art and gives the creator access to a software development kit, feedback on game design and how-to tips on making money from the app — all in exchange for a share of revenue. The company currently has 17 games available on Apple’s App Store and is looking to establish itself in the developer community as the place to learn to build iPhone games.

An eager batch of new student interns is helping in that effort. Last year, MGWU co-founders Ashu Desai and Jeremy Rossmann set up a formal internship program at the company’s “hacker house” for about 30 students, mainly from local high schools and colleges. Both Desai and Rossmann developed apps in high school and college (Desai’s generated $35,000), and want to help young people acquire the necessary skills and navigate the complicated process. During last summer’s internship, the students got help in programming and game development from each other and from some MGWU employees. “Now it’s on a bigger scale,” says Desai, who says that a word-of-mouth campaign attracted about 80 students to the current summer intern session.

May the ‘Tile Force’ Be with You

At its most basic, computer programming is the process of developing an actual program to solve some kind of computer problem. This process often results in the design of an algorithm, which is a step-by-step procedure for calculations. Stephanie Campa, who is entering her sophomore year of high school at Menlo School in Atherton, Calif., heard about the MGWU internship when Rossmann came to her “Intro to Computer Programming” class to tell students about the opportunity. “I signed up for the internship because I had enjoyed my programming class during the year and wanted to further my computer science knowledge,” notes Campa, who is 16. “I was also interested in making an iPhone game because I thought it would be a great experience to make a game from start to finish and have it published on the App Store.”

Campa, considered a star among her fellow interns due to the speed at which she has developed her game, is working on an app called Tile Force, a multi-level puzzle game that involves a ball and a goal on each level, along with obstacles like bombs and walls. On each level, the player has to get the ball to the goal by dragging colored arrows onto the screen that boost the ball’s velocity in a specific direction.

“The player must navigate around the on-screen obstacles while being strategic and using as few arrows as possible,” Campa says, adding that she’s hoping the internship helps her to become better at programming. “Coming into the internship, I had a lot of trouble with programming in Objective C and understanding syntax and structure [Objective C is a programming language; syntax refers to the words, phrases and context of computer programs; and structure refers to the way the program is laid out], but this internship has helped me a lot with that and has given me the skills to program my own game.”

Meanwhile, Campa is having fun, although she admits that building your own app can be complicated. “The toughest part of creating the game was designing levels in such a way that they could be passed with just the right level of difficulty,” Campa notes. “Because I play my own game so much, it is difficult to gauge how much trouble others will have with a level until I playtest. But I really enjoy the creativity that comes with making my own game, and I like designing new levels and inventing new features that make it more fun. I am mainly making the game for the experience, since I would like to do something in the math or computer science field after I graduate.”

William Willard, who will be starting his senior year at Gunn High School in Palo Alto this fall, heard about the program from one of his friends. “I think the hardest part of making a game is finding a good game idea. The internship has helped every intern reach that goal, and has helped them develop and grow their ideas,” notes Willard, a drummer in a local band who plans to major in computer science in college. “The best part of the internship is the great environment in the hacker house. Everyone is really nice and helpful, and it has been awesome being able to work with the people here.”

At 13, Gautam Mittal is one of the younger interns, but he is by no means intimidated by the high-powered experience. “I signed up for the internship primarily to get a chance to experience what it’s like to develop for iOS, as well as sharpen my programming skills,” he says, referring to the mobile operating system developed and distributed by Apple Inc. “I heard about MakeGamesWithUs through Ashu, and I hope to get at least one game on the app store by the end of the internship.”

Mittal, who will be in eighth grade at Palo Alto’s Jane Lathrop Stanford Middle School this fall, says the money he may be able to make off his app – if an app is a hit, it can generate thousands of dollars — isn’t the primary focus. “I feel that the most important thing about this internship is the experience; it has taught me so much,” Mittal says. “One of the coolest experiences was meeting the Reddit [social news and entertainment website] founder, Alexis Ohanion and listening to his talk about his entrepreneurial successes and failures.”

Mittal has built a game called The Elements. “It’s a very simple game to play, but one that’s tough to master,” he says. “There is a circle in the center of the screen that is split into three colored sections, and basically colored balls at random come flying towards this circle.” A player has to rotate the circle in the center to match the colored balls into the correct sector — but the speed and number of balls keep increasing, which requires players to stay alert. “It feels awesome to know that I’ve built a game that many people may use, especially because the App Store is used by so many people,” Mittal adds. “And there is the possibility of exponential growth in users.”

The toughest part of the program, and the challenge that Mittal enjoys the most, is thinking through code problems and designing algorithms to complete complicated tasks. “I feel that the internship has helped me in terms of understanding how to break through these problems as well as to write more efficient code,” says Mittal, who plans to get a degree in computer science when he goes to college. “I really hope that my career will also relate to the field of computer science and/or game/app development,” he says.

Desai and Rossmann are hoping for another App Store hit to add to MGWU’s catalog of games, which includes the popular Name that Jam, a top 25 music and trivia game in the U.S. App Store. They also want to spread the gospel of app development as they help nurture young, talented developers. “Anyone, student or teacher, needs evangelists,” says Desai. “We have the material, but now need people – boots on the ground.”

What are some of the skills needed to develop iPhone apps? What is programming? What are algorithms? What other language is important to understand?

Do you think app development is an art form or purely a scientific/mathematical process?

What is your favorite iPhone app? Why? What types of apps would you like developed?

Meet the Brightest Young Entrepreneurs: ‘Be Open-minded and Jump at New Opportunities’

Prom Appeals to the Heart – and the Business Brain