This month, Fatmata and Mariama Kabia, twin sisters who are senior international relations majors at the University of Pennsylvania, are seeing their entrepreneurial dream become a reality. The first issue of Memunatu, a magazine they have created for girls in Sierra Leone, will be distributed in middle schools and high schools in Freetown, the African country’s capital city, and Lunsar, the town where the Kabias' parents were born. The twins hope Memunatu will engage girls and encourage reading in a fun way.…Read More 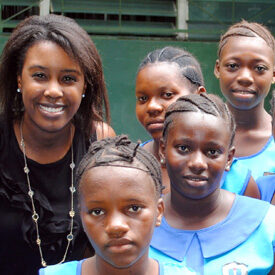 You can travel around the world looking for the next big idea, but sometimes profound inspiration can come from the most familiar source: your mom.

That was the case for Fatmata and Mariama Kabia, twin sisters who are senior international relations majors at the University of Pennsylvania. Inspired by their mother’s drive and spirit, the young women are launching a magazine aimed at adolescent girls in Sierra Leone, the small West African nation where both of their parents were born and raised. The magazine, which will offer a mix of fun and educational content, is called Memunatu, after their mother.

Fatmata and Mariama — who graduated from Robinson Secondary School in their hometown of Fairfax, Va. — grew up hearing relatives and family friends talk about Sierra Leone, so they knew about some of the challenges the country faces. It is one of the poorest nations in the world, and illiteracy is high, especially among girls and women. A civil war plagued the country for most of the 1990s, killing more than 200,000 people and throwing the country deep into economic distress.

As a result of that poverty, books and magazines are hard to come by in Sierra Leone. Even today, a decade after the end of the war, you can’t find a full-fledged bookstore anywhere in the country.

Mariama and Fatmata, who grew up poring over publications like Scholastic magazine, saw an opening in the market, an opportunity to encourage reading in a fun way and a chance to make a difference in their family’s homeland.

After talking to their parents and other Sierra Leoneans they knew in the United States, the Kabia twins hatched their idea: They would create an engaging, educational magazine tailored to the interests of Sierra Leonean girls between the ages of 10 and 17. And they would name the magazine after their mother, a professional scientist who consistently placed in the top of her class when she was in school.

To make their idea a reality, they started off close to home, going to their international relations professors at Penn for advice. Next, they reached out to experts at the university’s education department, as well as editors at the media conglomerate Conde Nast. With their idea slowly taking shape, they started applying for grants and fellowships, ultimately garnering support from Weiss Tech House at Penn, the Clinton Global Initiative and the Dell Social Innovation fund.

With some money in their pockets, it was time for the Kabia twins to put their idea into action. So in the summer of 2011, they came to Sierra Leone for the first time in their lives. They needed to do some research: They needed to talk to some girls.

“Conducting focus groups was key to understanding the girls’ interests as well as possibilities for our venture,” says Mariama. On their first stop at a girls’ school in Freetown, they gave a presentation in front of a school-wide assembly, then asked the girls: “If you could create your ideal magazine, what would its table of contents look like?

“From that question alone, we saw a great deal of creativity emerge as the girls drew pictures, wrote captions and laughed among themselves,” says Fatmata.

The sisters found that it was easy to talk to the girls; in fact, they were surprised by how much they had in common. Those interactions were no doubt helped by the fact that Fatmata and Mariama had grown up speaking both Krio and Temne, two widespread Sierra Leonean languages, at home with their parents in Virginia.

But still, it was clear that the two American girls didn’t quite fit in.

“We stood out to a certain degree, and we didn’t expect that,” says Fatmata, adding that even people they passed on the street could easily identify them as outsiders. But that didn’t mean that they felt unwelcome. “I think that the girls themselves were surprised by how similar we were to them,” Mariama adds. “And in general, people appreciated how much we cared about Sierra Leone.”

Back in Pennsylvania, the sisters, who are passionate about writing, began to piece together the magazine’s content using the information they had gathered from their focus groups. Among the highlights of the first issue: advice on fashion trends, answers to health questions, tips on finance and entrepreneurship, and inspirational stories and quizzes to get the readers engaged.

But even with that content in place, it would still require a lot of effort to produce an actual magazine. So the twins recruited a handful of fellow college students to be on their advisory board and take on some of the writing, illustrating and design work. They also had some contributions from students at the University of Sierra Leone, a partnership that the twins hope to expand in the future. But in the end, they did a lot of the work themselves.

And now, two years after Fatmata and Mariama first dreamed up the idea, Memunatu is about to become ink-on-paper reality. The first issue of the magazine – a print run of 5,000 copies – is set to be distributed in March to middle schools and high schools in Freetown, Sierra Leone’s capital city, and Lunsar, their parents’ hometown.

But that’s just the beginning. The Kabia twins, who are applying to graduate schools to continue their education, plan to print four issues per year, and they want to expand the magazine’s distribution. Eventually, they hope that Memunatu will reach schools – and inspire girls – in every corner of the country.

Why is Sierra Leone a strong market for a magazine like Memunatu?

Why was it important for the Kabia twins to visit Sierra Leone? What did they learn?

Do you think Memunatu will be a success in Sierra Leone? Why or Why Not?