Of Deals and Dolls: Entrepreneurs Train for the Real Thing

The pace of buying and selling can get furious at business boot camp. Glimpse the world of would-be entrepreneurs at work as they try to learn all they can about running their own businesses. Scenes like this are a dream fulfilled for two Harvard grads on a mission to help low-income families in America.…Read More 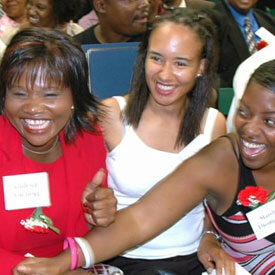 It’s Friday and the indoor market on West Side Avenue in Jersey City, N.J., is buzzing.

Two young people, Rollin Burnett and An Sean Fields, approach with their latest design — a pointy piece of headwear they call “the tourist hat.” They want to sell a collection of them to a retail store. “How much are you willing to pay for each hat?” Burnett asks the store’s representatives, Donna Weiss and Yasmia Taylor.

Taylor has a ready answer: “$75.” Burnett responds: “That’s a little low. The stitching on our hats is the best in the country.” Weiss isn’t buying it: “Our client wants only horizontal stitching. Hmm, I don’t know about your quality,” she says, leaning in to study the hat.

Fields fires back: “This is just a sample hat. We’d be more than happy to make the hat that you need.” Burnett tries to close the deal: These hats are worth “at least $85 each,” he says.

Weiss goes for it. “Okay, $85 a hat and we will take four. We need them by next Thursday.”

And thus begins a business cycle that whips into a frenzy in the next few hours, pitting different manufacturers against each other in a race to sell the most hats and earn profits. The manufacturing teams (including Burnett and Fields) must buy raw materials and quickly make the hats the way their clients (including Weiss and Taylor) specify, using patterns, paper and scissors. The teams also negotiate with outside markets, pay weekly employee salaries and monthly rent, repay their loans to the bank and respond to the unexpected, like employees getting hurt on the job.

Welcome to business boot camp. Burnett, Weiss, Taylor, Fields and 10 other wheelers and dealers are actually students of the Rising Tide Business Academy, a 10-week course that covers basic business management and planning for start-up entrepreneurs. On this night the group is playing a game under the guidance of instructor Jay Savulich that teaches the business principles of supply and demand and managing cash flow, the amounts of cash received and spent by a business during a period of time –- in this case, one month.

“This class is incredibly helpful,” says Burnett, who sports a cluster of dreadlocks that poke out like fat tootsie rolls from beneath his black nylon skull cap. “I took a business course for credit and I didn’t learn as much as I’ve learned here.”

Burnett and his classmates, all Jersey City residents, are microentrepreneurs — owners of very small businesses, usually run by one person, who typically have a day job and are looking to turn their hobbies and talents into sources of income.

The Association for Enterprise Opportunity in Arlington, Va., estimates that the U.S. has more than 24 million microbusinesses. Burnett, for example, wants to escape his construction job – which isn’t very dependable, especially when the economy isn’t doing well — and open The Lab, an urban hip-hop store. Fields plans to build up her Christian publishing company, Blessed and Favored. An unemployed Iyana Cansler wants to style hair; and Angela Huggins, a nurse, is getting serious about selling the cloth dolls she makes at home.

From Ethiopia to Jersey City

Microentrepreneurship, seen as a way to help people who don’t make a lot of money get ahead, has become a life’s mission for Alfa Demmallash and her partner, Alex Forrester. After graduating from Harvard University in 2004, Demmallash and Forrester founded Rising Tide Capital in Jersey City. “We didn’t want to be seen as two Harvard grads with their creative ideas for solving the world’s problems,” says Demmellash. “We wanted to have a genuine relationship with the community.”

Since 2006, the Rising Tide Business Academy has graduated 158 microentrepreneurs, launched 28 new businesses and strengthened 50 existing businesses. All graduates get one-on-one consulting and a spot in Club CEO, a circle of entrepreneurs that gathers monthly.

For Demmallash, who came to the U.S. from Ethiopia when she was 12, support of microentrepreneurs is very personal. Her mother, Genet Melesse, worked as a waitress in Ethiopia and also sewed at night to bring in extra income. That money helped finance their family’s move to America. “I came to this country with very different expectations; perceptions of streets paved with gold,” says Demmallash. “Microentrepreneurship is a way to make sure the working class in America does not fall through the cracks.”

Meanwhile, back at business boot camp, manufacturers rally to sell off their tourist hats in the final moments of the pretend hat market. “We get very excited,” admits Huggins, pressing a wad of pink cash into the hand of the local “banker.” “The best part about this academy is that it teaches us how to focus. We settle down to what we have to do to get our businesses started.”