Of Cupcakes and Skateboards: Teens Get Motivated to Do Something Good

Why wait? Do Something, a nonprofit in New York City, is empowering teen volunteers to change the world. Through a new mobile outreach strategy, the organization plans to recruit even more young social activists. However they become inspired, civic-minded teens like Allison Nguyen, Myles Kessler and Jordan Coleman are making a difference.…Read More 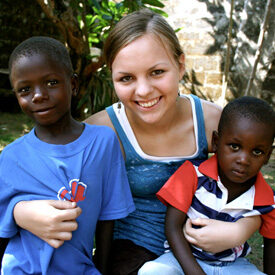 Allison Nguyen from Clear Lake High School in Houston, Tex., used her love of baking to create a national network of volunteers who throw birthday parties for children at homeless shelters.

Jordan Coleman, a rising junior at Hackensack High School in Hackensack, N.J., interviewed some of the world’s biggest celebrities and directed a movie about the importance of education for African-American youth.

All three teens had an idea to change the world, and all three got help from Do Something, one of the country’s largest volunteer organizations, to turn their ideas into reality. Do Something is a New York City business that helps teens and young adults organize and carry out volunteer projects in their hometowns. It offers grants and advice for teens who are trying to make a difference, and it sends text message blasts out at least once a week to give teens volunteer ideas.

But this is a different kind of volunteer group. You don’t need to have a teacher, parent or advisor in charge of your work. Do Something puts the power right in the hands of teens who want to volunteer. “We don’t believe you need to wait until you’re a grownup, become a celebrity or gain notoriety,” says Amanda Ashton, coordinator of social entrepreneurship for Do Something. “We believe you can make a difference right now.”

Do Something helped 1.2 million teens organize community service projects in 2010, and is on track to work with two million teens this year. Although the nonprofit was formed in 1993, its newest leader, Nancy Lubin, began revitalizing the group in 2003 and pushing its activities online.

Getting information out to its target audience via text messages — its latest initiative — was the natural next step for Do Something, says Ashton. Last December the group began to rely more heavily on mobile technology to inspire young people to take part in social activism. The goal, according to a recent article in The New York Times, is to use mobile technology to sign up 3.8 million members by 2014, up from 1.2 million in 2010. So far, so good, says Ashton. “It’s really exciting for us to see it working. Texting is so important now. It’s an instantaneous form of communication. Kids may have multiple e-mail addresses, but cell phone numbers usually stay the same.”

Regardless of how they are receiving it, lots of teens are getting the Do Something message.

Kessler, 18, got a $2,000 grant from Do Something to help him organize Ride to Provide, a skateboarding competition for charity. Skaters pay a $10 entry fee, and all the proceeds are donated to homeless shelters in Detroit, Mich., near his hometown of Beverly Hills. Kessler says he’s not a great skater, but loves to design artwork for the skateboard decks. “I’m not really doing it for huge profits. I just like building and creating things. I was surprised at how engaging it is to be involved in something like this…. It’s easy once you put down your plans.”

While Coleman already had a documentary filmed and in theaters by the time he became involved in Do Something, attending several of the organization’s one-day volunteer education boot camps helped him to refine his speaking and organizational skills as he planned his next project, a film on teen dating violence. “In the boot camp, you get to practice your speaking skills, learn about building a website, fundraising, marketing. Whatever it is, they can help you,” he says.

Coleman, who turns 16 this summer, directed and produced, “Say It Loud!” a documentary about how education helped the world’s biggest sports and music stars achieve their dreams. Coleman interviewed Kobe Bryant, Ludacris and the Rev. Al Sharpton, among others, for his project.  Although he doesn’t yet have his driver’s license, Coleman already knows his future lies in this type of film project. “I want to continue to make films to educate and entertain,” he says. “I feel like there’s nothing out there to solve teen issues, and my films can help do that.”

Nguyen and her friends loved to bake cupcakes, and often donated their leftovers to an area homeless shelter. She initially would donate the baked treats once a month, but she eventually expanded to multiple shelters per month. It wasn’t long until her cupcake donations turned into throwing birthday parties for homeless kids at the shelters, and Iced Capades Cakery became a reality.

Do Something gave her a $1,500 grant to buy decorations and supplies for her parties, which in turn got her a spot on the Rachael Ray show. The publicity from that allowed her to recruit more volunteers to bake in her hometown, plus a fleet of people doing similar birthday parties at shelters across the country. “I love being able to go into these shelters and see the reactions of the kids face-to-face,” she says. “It’s amazing to be able to make such a difference just by baking a few cupcakes and throwing a birthday party.”

Credit Alert: The Dangers of Overspending and Underpaying