Kiva: Improving People’s Lives One Small Loan at a Time

Microfinance tries to improve the lives of people in the developing world by giving them very small loans instead of donations. Kiva.org, a website where people make microloans to individual borrowers, has become one of the hottest and hippest sites in cyberspace. Oprah has featured it. Bill Clinton has praised it. And eBay has imitated it. One commentator compared kiva.org to an online dating service.…Read More 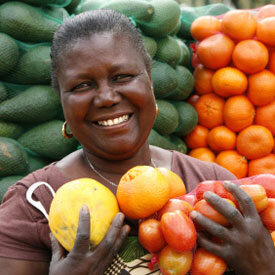 Nearly everyone told Matt and Jessica Flannery that their idea — a website where people could make micro loans to individual borrowers in the developing world — wouldn’t work.

Venture capitalists couldn’t see how anyone could make big money on loans as small as a few hundred dollars. And foundations, for their part, wouldn’t support something that they saw as commerce, not charity. “We were in this weird social entrepreneurship space, trying to fight perceptions,” Matt Flannery recalled.

They decided to just start doing it. Today, the website that the Flannerys created — Kiva.org — is one of the hottest and hippest on the web. One online commentator compared it to an online dating service, and even Bill Clinton has praised its virtues. Kiva’s 270,000 lenders — people who typically hand over their money, via credit card, in $25 increments — have funded borrowers in places as far flung as Tanzania and Tajikistan. So far, they have assisted about 40,000 borrowers in 40 countries and provided a total of about $27 million in funding.

Kiva, founded in 2005, has been so successful that it has already spawned imitators: eBay last year launched a lending site called MicroPlace.

A Cross between Google and Bono

Kiva mixes the entrepreneurial daring of Google with the do-gooder ethos of Bono, the lead singer of the rock band U2. And with it, the Flannerys have managed to merge two recent socio-economic trends — social networking and microfinance. Microfinance tries to improve the economic condition of people in the developing world by giving them very small loans instead of donations.

Like a social networking site, Kiva posts profiles of potential borrowers. Lenders then study the profiles and make loans to people whom they find appealing. They can sort potential borrowers by nationality, gender, business type or level of need. African widows tend to draw significant interest, while Central American men — and butchers — tend to attract far less. (Lenders can also post their profiles, and Kiva highlights individual lenders and the loans that they have made.)

Once a lender makes a loan, Kiva sends the money to a microfinance institution, or MFI, in the borrower’s home country. The MFI — Kiva has relationships with about 100 — disburses the funds and works with the borrower to ensure timely repayment. In the language of the banking industry, the MFI services the loan.

Kiva’s lenders aren’t allowed to charge interest on their loans, and Kiva doesn’t charge interest to the MFIs. But the MFIs do charge their developing-world borrowers. This arrangement creates a low-cost funding source for the MFIs while also allowing them to generate money to cover their operational costs. Ideally, a Kiva lender will re-loan his or her money when it’s repaid, creating a virtuous circle. According to Premal Shah, Kiva.org’s president, “97% of our active loans are on time, and our default rate is less than 1%.”

Unfortunately, lenders haven’t caught on to the second step in the process. “We have a challenge right now because the people who are getting paid back aren’t reloaning,” Flannery noted. “They are just keeping the money in their [Kiva] account. Maybe they didn’t know it was a loan. Maybe they thought it was a donation. So we have about $3 million right now in the bank just getting float.”

Kiva, organized as a nonprofit, makes the money to sustain itself by asking its lenders to give a voluntary contribution each time that they make a loan. “We get about 8%,” Flannery said. “So if our lenders lend a million dollars, then we get $80,000 to pay our engineers and programmers.” Today, Kiva has a staff of about 25 at its San Francisco headquarters.

The Importance of Good Press

Early on, the Flannerys and Shah bootstrapped the website, paying startup costs out of their own pockets. At the time, Matt Flannery wrote computer programs for TiVo and Shah worked for eBay. They ended up not needing to raise outside money because Kiva began to get mentions in the media. That brought potential lenders flocking to the site. “Frontline on PBS, that brought us to a 10x level of growth overnight,” Flannery said. “And Oprah, that was maybe 10x again overnight.”

Flannery, for one, is pleased to have ignored the naysayers. “Experts said, ‘That’s an interesting idea for advertising, but that can’t scale. How can thousands of people from Uganda, Cambodia and Tanzania — random places where the Internet doesn’t work so well — post their pictures and get people to lend to them?’ The idea did seem crazy,” Flannery noted. “But we weren’t thinking it was going to be a multimillion-dollar business. We were thinking it would be our side project.”

Who are the Flannerys and what did they create?

What does it mean to be a lender on Kiva?

Research microfinance using the related KWHS articles and links. How does it work and why is it effective? Does everyone believe in its power?

One comment on “Kiva: Improving People’s Lives One Small Loan at a Time”