Cambria Wells, 18, spent much of her free time during high school with her hands in giant fish tanks, feeding her own curiosity about aquatic life. She now plans to pursue an environmental career. Green jobs are among the hottest out there these days – a little career exploration may be the best preparation.…Read More 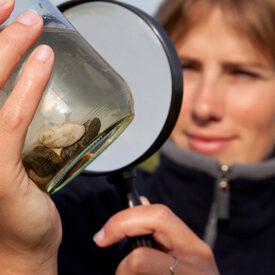 When Cambria Wells was a freshman in high school, she discovered something that few people even knew existed. As a new volunteer at the Ty Warner Sea Center at the Santa Barbara Museum of Natural History in California, Wells was stationed on the wet deck, a big hole down to the ocean for visitors to get a closer look at ocean life. “I picked up something that looked like a glob of mucus sitting on a kelp frond. When I put it in the water, it expanded,” notes Wells, who is now 18. “Turns out it was an opalescent nudibranch. It was absolutely breathtaking to me. Nudibranchs come in all these colors and sizes, and you just wouldn’t believe they existed if you didn’t see them for yourself.”

Perhaps it was this little nudibranch or the surrounding aquariums filled with fish, sharks and octopuses, but as Wells continued through high school, her fascination with sea life started turning into a career track. Last summer, after graduation from River Oaks Academy in Westlake Village, Calif., she bridged her transition to college with a project that involved a special pair of seahorses. Through a grant Wells won from the National Environmental Education Foundation (NEEF) in Washington, D.C., she was hired by the Ty Warner Sea Center as an intern in charge of preparing an aquarium and resources to house two Pacific seahorses, a threatened species.

“All the volunteers harbored this secret hope that we would someday get seahorses. But because they are expensive, the museum hadn’t wanted to pay for them,” says Wells, a freshman at the University of California at Santa Barbara with plans to major in aquatic biology. “The NEEF grant let me take charge of this project, and we ended up getting these seahorses [for $175 each].”

From Riding Horses to Studying Seahorses

Wells’ experiences at the Ty Warner Sea Center during high school are a great example of how personal interests can be channeled into career exploration. While Wells nurtured a love for animals from a young age through horseback riding, and thought she might become a veterinarian, when that hobby became too expensive, she decided to investigate the world of ocean creatures.

High school students who want to start researching what it is like to work in a particular environmental job can visit Planet-connect.org, a portal that offers career profiles and internship and grant opportunities. You can read detailed job descriptions from geophysicists, research ecologists, wildlife biologists and green construction project managers, to name a few. For instance, according to Bridgette Flanders-Wanner, a wildlife biologist working on a Wetland Management District in South Dakota, “There are a lot of students who pursue this field because they like to hunt and fish. That’s great, but you don’t necessarily need to enjoy those pastimes to be a good wildlife biologist. Wildlife biologists have backgrounds that are diverse, from a rural farm background to an urban city background. What makes a good wildlife biologist is someone who cares deeply about the resource they are working for ‑- wildlife and natural places.”

The Value of Environmental Knowledge

Knowledge about the environment is important in many fields today, notes Chan. A recent NEEF survey found that 78% of organizations, including companies and nonprofits, believe that knowledge of the environment among job candidates will increase in importance for hiring within the next few years. “Many businesses today see the environment being an important consideration in how they are run,” says Chan, referring in part to a company’s social responsibility. “It’s something that their customers and the public are interested in on a daily basis.” Specific environmental jobs that are in demand these days include environmental science technicians, who monitor air and soil quality, and sustainability managers, who track a company’s environmental performance and help it meet eco-friendly goals.

Wells, focused for now on surviving her college-level organic chemistry course, sees herself ultimately combining her love of research with managing aquariums, which she says are “a really important part of showing people what’s in the water and things that are there to protect.” Meanwhile, the sea center has extended her internship so she can continue her aquarium training — and, of course, tend to the seahorses, which are thriving in their new habitat. Says Wells: “They have grown 2 cm and are trying to mate.”

2 comments on “Of Nudibranchs and Seahorses: Exploring Environmental Careers”