Steve Wozniak is proof that, with a little clever thinking, techno geeks can become billionaires. He and high school friend Steve Jobs co-founded Apple and in doing so forever changed the course of technology development. What does “Woz” love even more than building cool devices? A good laugh.…Read More 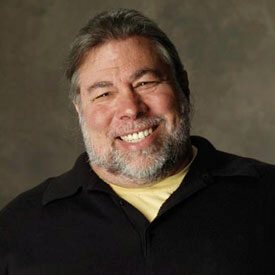 Steve Wozniak, or “Woz” as he is commonly called, is best known for co-founding Apple along with high school friend Steve Jobs. Wozniak’s early entrepreneurial ventures were closely intertwined with Jobs’ own. For example, it was Jobs, four-and-a-half years younger than Wozniak, who suggested the two sell Wozniak’s “blue box” device to students in the dorms at Berkeley.

Wozniak was eventually awarded the National Medal of Technology by President Ronald Reagan in 1985, among many other honors. In 2006, he published iWoz: From Computer Geek to Cult Icon: How I Invented the Personal Computer, Co-Founded Apple, and Had Fun Doing It, about his life before, during and after Apple.

Knowledge@Wharton spoke with Wozniak by phone from his home in Los Gatos, Calif., on a wide range of topics. An edited version of that conversation follows.

Knowledge@Wharton: What got you originally excited about math and science?

Steve Wozniak: I can’t pin it down to an exact date. I wanted to be like my dad. I’d go to where he worked and see him hook up wires and get signals to appear on screen.

But I wasn’t sure I was cut out for that. And then about third grade my mom practiced flash cards with me in the kitchen. [In] school, we had a multiplication test and I beat the girls. And the teacher said that was really strange. So I started thinking, “Woah, I’m good at math.”

Knowledge@Wharton: From reading iWoz one gets the sense that you were an “accidental entrepreneur” rather than someone who set out to found a company.

Wozniak: I was very skilled at a certain kind of computer design. I could just do magic that other people couldn’t do. I knew I’d build a computer when it was possible. That year [1975] was the year it was possible.

As far as starting a company — no, I was so happy with my job [as an engineer at Hewlett Packard]. I could have been an engineer for the rest of my life, had enough income to be happy and designed things in my spare time.

That was what drove me. I wanted to show off my design techniques — and help the world get to this big, revolutionary point.

Knowledge@Wharton: The other thing that comes through in your book is that you’re quite the prankster. What about pranks fascinates you so much?

Wozniak: I don’t know. Some people go to comedy clubs, some watch sitcoms, some watch comedy movies. It just feels good when you laugh!

I admire people when they think of unusual things other people wouldn’t have thought of. But even [when you’re] repeating a joke you’ve heard, it makes people laugh.

Humor is closely related to the creativity and invention that we’re born with. It’s that spirit of thinking out something a little bit different — making up your own jokes.

Knowledge@Wharton: You mention in the book that you and Steve Jobs “were always different people … right from the start.” How so?

Wozniak: We were very similar in certain ways, like the values [we had] as we grew up in our high school. We were both leaning towards the counter-culture. Steve was more a part of it and I was more mainstream — feet on the ground.

Steve and I would have conversations and get excited about the same technological possibilities.

I was more the humorist; I was more the expert designer. But we shared common interests. We were friends for eight years [before] we started Apple.

Knowledge@Wharton: Looking back, how do you think your life would have been different if you had never met Steve Jobs?

Wozniak: I think that I would have been as humorous and happy as I am [now], and have the good-quality friends and the things that I love in life.

I don’t know if I would have ever had the money to have a house. We were in our twenties when we started Apple. We had no savings account. We didn’t own a car. We didn’t make anything like the money you need to buy a house in California, even then. We didn’t have any experience in business. If I got some money, I’d go out and buy some electronic parts and build something.

The company I worked for, Hewlett Packard, was a big part of my life back then. They had such incredible values [that respected] engineering. I wanted to work there forever. I was so excellent at what I did electronically, I would have always had a job

Knowledge@Wharton: What are you most proud of having accomplished in your life thus far?

Wozniak: I used to answer that with something like dial-a-joke. [He started the first dial-a-joke hotline in San Francisco, telling all the jokes himself.]But actually, [it was] creating the Apple II computer. Without it, things would have gone a lot differently and slower [with the development of] personal computers.

I had so many brilliant engineering ideas in there. So I’ll have to pick that one.

Six Money Moves for Your Future