What stands 300 feet high, weighs more than 1,000 tons and has rotor blades that reach more than 250 feet in diameter? Chances are you’ve seen one, but never really thought much about it. Wind turbines are perhaps the most towering evidence of a growing manufacturing sector in the U.S. – the production of wind energy. KWHS goes down to the farm – the wind farm, that is – to check out the moving parts of this promising new industry.…Read More 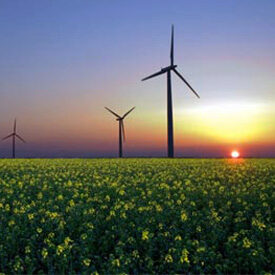 Living in Indiana, Sarah Distelrath has seen her share of wind turbines rising like rows of metal monsters in open fields. Indiana is home to one of the top 10 largest wind farms in the United States — Fowler Ridge Wind Farm — with more than 500 wind turbines spanning across 50,000 acres. A wind farm is a group of wind turbines in the same place used to generate electricity. “They are larger than life,” says Distelrath of the structures, which can stand 300 feet high, weigh more than 1,000 tons and have rotor blades that reach more than 250 feet in diameter.

Since landing a job three years ago with EDP Renewables North America LLC, Distelrath has come to realize that size is only one powerful aspect of wind turbines. As a project developer with the Houston-based renewable energy company, Distelrath had the opportunity to help develop the first utility-size wind farm in Ohio, Timber Road II Wind Farm. “Not only will Timber Road’s 55 turbines be able to supply electricity to more than 27,000 homes using wind energy, the farm has produced hundreds of jobs, income for landowners and tax revenue for the local government,” she says. Jobs in wind energy development often involve figuring out which areas are best for creating wind farms.

According to the American Wind Energy Association (AWEA), wind power, which accounts for roughly 50% of renewable energy (along with solar, hydroelectric and geothermal), is being relied on more and more by many states to fill their energy needs. Wind farms provide one of the most environmentally friendly sources of power generation available today; using wind energy means that less fossil fuel needs to be burned to make electricity.

In 2010, 15.4% of Iowa’s electricity was produced by wind power — enough to power more than one million homes — and in North Dakota, 12% was produced. A report by the Department of Energy says that it may be feasible for wind power to provide 20% of U.S. electricity needs by 2030.

But wind farm development is a long-term commitment. The Timber Road project took several years from inception to installation, says Distelrath. “Site selection alone requires at least a year of research and planning. During this process, I work with different teams that specialize in everything from wind availability to environmental concerns to legal issues.”

What’s more, a single wind turbine, which consists of roughly 8,000 parts, must also be designed, built, transported to the site and erected before it can start producing energy. Multiply that by at least 100 when developing an entire farm.

Once a site is selected, the land is secured and the foundations have been built, the turbines can be installed. When they are up and running, each wind turbine functions sort of like its own power plant, collecting energy from the wind that is then gathered into substations to be converted into usable electricity. The bigger the wind turbine, the more wind it reaches and the more electricity it produces. “When everything runs smoothly, electricity flows from the wind farm to the power grid and eventually lights up homes,” says Distelrath.

Although some states are better known for wind power than others, according to the U.S. Department of Labor, almost every state in the U.S. offers a wide variety of wind energy jobs. “I think the biggest thing I learned from working on the Timber Road project is how many people it takes to build and maintain a wind farm,” says Distelrath. “I worked with farmers, government employees, engineers, lawyers, meteorologists and environmentalists.”

According to the AWEA, an estimated 85,000 Americans are currently employed in the wind power industry and related fields. And as the wind energy industry continues to grow, it will provide many opportunities for workers in search of new careers. A few specialized job titles include wind turbine technicians — who focus on the efficiency and output of turbines — to blade inspectors, who examine massive turbine blades using high-powered telescopes.

Evelyn Zapata, a civil engineering manager who worked on the development of Timber Road, found her new niche a few years ago in wind energy production. Before joining EDP, Zapata worked in the wastewater industry. “I was hearing about job opportunities in the renewable sector, but I didn’t know too much about wind,” she says. “I believe in green energy and recycling, so the opportunity to be a part of developing an alternative energy source that doesn’t pollute was very appealing to me.”

Distelrath was also a newbie to the wind energy industry. After teaching in the Peace Corps for a couple of years, she returned to the United States looking to get involved in a green type of job. “I entered the market when it was up and coming, and luckily EDP wasn’t necessarily looking for people with wind experience,” she says. “They were looking for people who fit in well with the culture and who were able to work with very different types of people.” Job opportunities in the wind industry range from machinists, welders and electricians to biologists, geologists and lawyers.

“In addition to supporting job growth, the Timber Road project used a large percentage of products that were manufactured in the Unites States, as well as the services of local construction companies,” says Distelrath.

A wind farm’s contribution to the local economy doesn’t stop once it’s been developed. In fact, Timber Road will continue making an impact on the local business community for anywhere from 30 to 50 years, or for as long as it’s operational, she adds.

This is good news not only for existing manufacturers in Ohio. The project also revitalizes the agriculture industry overall and creates a need for companies that specialize in manufacturing turbine-specific parts along with  those that provide turbine maintenance and service.

In 2010, EDP and AEP Ohio, a unit of American Electric Power, signed a 20-year contract to purchase the power generated from the wind farm. According to the U.S. Energy Information Administration, utilities often offer green pricing options that offers customers the option of paying  more for electricity that comes from renewable sources, which in turn supports businesses specializing in new technologies used in harnessing wind energy.

Wind power is the country’s fastest-growing energy source. Colleges across the country are offering two-year certificate and other degree programs in wind energy and turbine technology, and training people to become technicians and renewable energy specialists. For the past five years, for example, Laramie County Community College in Wyoming has offered an associate degree in wind energy. It is a new manufacturing sector, and a key component of the energy future in the U.S. “It’s really exciting to work in an industry where you see progress being made,” says Distelrath.

What is Fowler Ridge Wind Farm, and what role did Sarah Distelrath have in creating it?

How many people are employed in the wind power industry? What are some related jobs?

How does wind energy support other types of businesses?

Discovering the Power of Data to Predict Forest Fires