In this age of astronomical college costs, some higher ed institutions are getting creative. Clarkson University has developed a new scholarship for young entrepreneurs and innovators that supports their businesses while also giving them a break on tuition. Says one high school innovator: “It’s life-changing.”…Read More 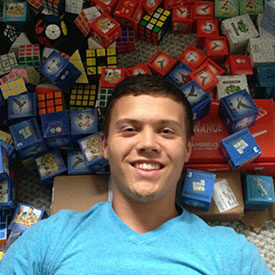 May is typically the month high school students must make that all-important decision: Now that I’ve been accepted, which college do I want to attend? These days, as tuitions creep ever higher — $50,000 and more a year for private universities — finances can play an important role in that decision. Who wants to owe hundreds of dollars a month in student loans post-graduation in a struggling job market? Some have even suggested that higher education is not worth the cost, prompting big-money businessmen like Peter Thiel, co-founder of PayPal, to offer serious teen entrepreneurs hundreds of thousands of dollars to forego college and invest instead in their budding ventures.  Life and commerce, they say, is the best incubator for business success – not a high-priced campus.

But does it have to be an either/or ultimatum? Clarkson University in Potsdam, N.Y., doesn’t think so. In the past few years, the university has launched an innovative solution to helping aspiring teen entrepreneurs afford higher education and grow their businesses.

Rubiks Cube and Other Interests

Meet Evan Jennings, a 17-year-old from Lowville, N.Y. When he was 14, Jennings launched the E3cubestore Rubik’s Cube and Puzzle Shop, an online e-commerce site that sells puzzle cubes designed for speed solving and competition. “Some 90% of our demographic are speed-cubing competitors,” says Jennings, who was home schooled until last year when he completed his senior year, as well as several college credits, at a local community college. “We were vendors at the speed-cubing national competition last year in Las Vegas and then again at a smaller competition at MIT in November.”

Jennings applied to Clarkson University, which is known for its business and engineering programs, last year, and was invited to compete for the school’s Young Entrepreneurs Award. After presenting his E3cubestore business plan to a panel of Clarkson judges earlier this year, including university president Anthony Collins, he was selected as the winner of the award.

Jennings now has a full scholarship to Clarkson, which covers the annual tuition of $40,610 for four years, in exchange for 10% equity [an ownership interest] in his business. “The assumption as I accept this scholarship is that I will study entrepreneurship while I’m there,” notes Jennings. “Clarkson has a vested interest in my company. Their entrepreneurship team will be helping, and my peers at the school will be thinking about the business with me. This program will serve to revitalize my business and get a lot done as far as integrating it with different payment methods online and streamlining the website. I may also start different ventures while I’m there.”

The unique Clarkson scholarships – which have so far gone to a handful of budding entrepreneurs and, more recently, to young innovators through a separate Young Innovators Award – cover tuition costs after financial aid. In exchange, the university takes a 1.25% equity stake in the businesses for every semester the winning students are at Clarkson, for a total of 10% over the course of four years.

The program is recognizing and investing in the talents of business-minded teens, says Matt Draper, deputy director of Clarkson’s Shipley Center for Innovation. “I’m here because I was sick and tired of hearing entrepreneurs say that they had to drop out of school to pursue their dreams,” says Draper, who runs the Innovators Award in tandem with the Entrepreneurs Award out of Clarkson’s Reh Center for Entrepreneurship. “Anything earned from the program goes back to lowering the cost of education, which was the focus of our president Tony Collins, [the visionary behind this idea]. The university looks at the outcomes in two ways: Yes, there is an equity stake, and there could be a liquidity event in a payoff, in which case we lower the cost of education. The short term is the equity, and the long term is a connection of highly successful, engaged alumni who give both financially, but also of their time and mentoring.”

Draper stresses that the scholarship is more than a financial award, noting that he and other faculty meet weekly with the chosen entrepreneurs and innovators, assist them with prototyping and business development, provide space in a downtown incubator and offer mentoring from past winners. Clarkson’s first Entrepreneurs Award winner, Matthew Turcotte, founder of North Shore Solutions, a website development company, purchased a $200,000-square-foot office building in Watertown, N.Y., earlier this year after earning six figures in 2012.

Briar Bonadonna, a senior at Honeoye Falls-Lima High School in Honeoye Falls, N.Y., and recipient of Clarkson’s 2013 Young Innovators Award and scholarship, has already benefited from the university’s business support. Draper and Clarkson’s legal team recently helped Bonadonna pay for and secure a provisional patent on her PodBottle, a water bottle that stores keys, phones, jewelry and the like. “Now nobody else can steal my idea,” says Bonadonna, who came up with her innovation while on the high school cheerleading squad. “I can’t start working on my business until after four weeks of school at Clarkson because they want me to feel the freshman atmosphere,” adds Bonadonna, who is 18. “After that, we will start manufacturing the PodBottle in October. It’s life-changing. It’s the coolest thing I’ve ever done.”

Draper, a Division I athlete who won a full scholarship to college, says it’s about time that schools recognize the gifts of young entrepreneurs. “What’s really cool about this is that you don’t need to be able to throw a baseball 95 miles an hour or have a jump shot to get a free ride to school. You don’t have to be No. 1 in your class or score 1600 on your SATs. You can go out, pursue an idea and come up with a viable business model that you are passionate about and get the same benefit.” While so far they have selected one a year from each category, Clarkson is committed to selecting up to five young innovators and young entrepreneurs each year for a total of 20.

Working with 16, 17 and 18-year-olds who embrace an idea’s potential, rather than focus on its flaws, is also refreshing, adds Draper. “High school is the best time to come up with ideas because you’re not jaded by society,” he says. “The world is telling [teens] they’re not ready yet, but from an innovation and entrepreneurship perspective, it’s the best time in their lives to pursue an idea, because they are young enough to go after the ‘what if.’”

What is entrepreneurship? What is innovation?

How do you feel about the costs and benefits of higher education? Have you ever considered not going to college, but instead investing money in an entrepreneurial idea or a more direct career track?

How does Clarkson reap benefits from its equity deal? How do the students benefit?

An Intelligent Glove, a Smartphone App and a Teen’s Perspective on What’s Missing in School