High school freshman and technology devotee Lane Sutton started KidCriticUSA.com when he was 12 and now, a mere two years later, he is building his rep as a social media strategist. In addition to running a consulting business, he speaks at schools and tech conferences about the social media revolution, privacy and online security and getting started on Twitter. Sutton’s latest strategy involves balancing business and school: “Homework and family time have always come first.”…Read More 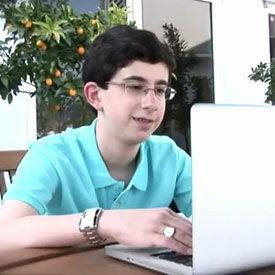 Noted social media strategist Lane Sutton has a lot to tweet about these days. There’s the resignation of one of his heroes, Apple’s Steve Jobs; the impact of Hurricane Irene, particularly in the social media world; and Sutton’s newest venture, starting high school as a freshman at Framingham High School in Framingham, Mass.

This latest gig has motivated Sutton to give some thought to the business/school balance. “The concept of free time is very different for many entrepreneurs, especially if you’re in school,” says Sutton, 14. “Homework and family time have always come first. During the week, I finish my homework before I do any consulting appointments, meetings or other work-related activity. Work is important, but I know that my studies will affect how I work.”

Whether it is time management or time online, Sutton is all about sound strategies. He runs a social media consulting business, advising people two or three times his age about how to use Twitter, LinkedIn, Facebook, YouTube and other applications to get the word out about their companies. He has scored face time with people like Tony Hsieh, the chief executive of online shoe and clothing retailer Zappos.com, and counts celebrity Tom Cruise among his 4,000 Twitter followers who want to know his thoughts on technology, social media and current events.

Sutton has been featured on CNN.com, Forbes.com and in The Boston Globe, and has given talks at social media conferences like PodCamp, held last October at Microsoft’s New England Research and Development Center in Cambridge, Mass. He and a 20-something friend led a discussion on privacy in the age of networking portals like Facebook and Foursquare. “Networking at industry, business and social events is the best way you can reach out to people,” notes Sutton, who juggles schoolwork with four consulting clients, ranging from realtors to lawyers, showing them how they can “get their voice heard” in the social media world.

Sutton was barely out of diapers when he took to the keyboard, which “gives us an edge” over older people who are still wrestling with it, he says. “Social media’s still growing up and I’m growing up with it,” Sutton notes. “I’ve been using a computer since I was three, and I got my own computer when I was five.” By the time he was 12, Sutton had launched KidCriticUSA.com, a website aimed at kids and families that offers reviews on things like movies, books, restaurants and products. Soon after, he went on the road to preach the gospel of social networking.

“It’s all about presenting your ideas by presenting the facts,” Sutton says. “I’m a statistical guy, so I present the facts first. I give them the numbers on social media users, the statistics and percentages about how people use social media to help their business. I cite sources and it rings a bell with people when I talk about how marketing, technology, social media and business come together.”

Sutton and his peers have grown up with digital media, mobile phones and social media, which gives them an inherent advantage, says Paul Hudson, CEO of Intersperience Research Ltd., a British international research consulting firm specializing in consumer behavior and customer experience. “They are ‘native’ to a digital environment, whereas the rest of us are constantly ‘adapting to it’, but at different rates,” Hudson notes. “We call teens ‘Digital Natives’ and the rest of us ‘Adapting Immigrants.’”

Teens’ attachment to mobile, to the Internet and to social media “means that every aspect of their lives and how they live is changing and leading to wider behavioral and social change than in the past,” adds Hudson. “For example; it is not just affecting the way we set a device up or record a TV program. It is changing the way people buy, communicate, solve problems, access information and consume services. There are technology gaps emerging across all of these. The communications gap that is resulting is as significant as the technology one.”

Savvy young entrepreneurs like Sutton can help bridge that gap. Sutton coaches his clients on writing blogs, social networking and building an online presence. “It’s second nature to him,” says Amalia Starr, a California autism advocate and author who was Sutton’s first client. “He advises me about sites that I should link to, and has helped me to understand concepts like re-tweeting and other strategies that get you noticed. Now I’ve got thousands of Twitter followers. Lane’s been like a real teacher to me.”

But is there more to life than wall posts and Twitter feeds? “I used to play little league baseball, but I stopped when I got heavily involved with the computer,” says Sutton. “Now, I mostly socialize with my friends at school. I do enjoy bike riding and spending time outside. Most of my friends are pretty supportive, though I guess some people are jealous. But I work hard at what I do.”

Looking ahead, Sutton says he would like to study business technology and management when he gets into college. A self-described “Apple fanatic,” Sutton says his business idols include Steve Jobs –“I’d like to start a company that’s based on a gadget the way that he did” — and Donald Trump. “Trump has had his ups and downs but he always stuck with real estate,” Sutton notes. “He does what he loves to do, and he won’t give up until it turns out right.”

One comment on “Social Media Strategist Lane Sutton: A ‘Digital Native’ on a Mission”

You Have 60 Seconds to Make Your Elevator Pitch. Go!