San Diego Comic-Con ended its four-and-a-half day run in late July. If asked to summarize Comic-Con in a single phrase, a good choice might be “revenge of the nerds.” San Diego Comic-Con is where popular culture fans of all stripes assemble to revel in their love of comic books and related science fiction and fantasy themed movies, television shows and literature. Kendall Whitehouse, new media editor at Wharton, attended San Diego Comic-Con last week, took a lot of pictures and filed this report.…Read More 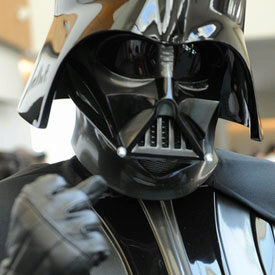 San Diego Comic-Con ended its four-and-a-half day run in late July. If asked to summarize Comic-Con in a single phrase, a good choice might be “revenge of the nerds.” San Diego Comic-Con is where popular culture fans of all stripes assemble to revel in their love of comic books and related science fiction and fantasy themed movies, television shows and literature. The event is also evidence of the increasing power of fan culture in Hollywood and beyond.

Many of the Hollywood elite travel to San Diego each July to promote their wares and pay homage to their fanbases. Steven Spielberg was one of several high-profile filmmakers at this year’s Comic-Con to lavish praise on the audience and thank them for supporting his work.

In a special Comic-Con edition of The Hollywood Reporter, “Lost” co-creator and executive producer Damon Lindelof penned a clever piece exploring the trends underpinning this annual trek of the powerful from Hollywood. After first establishing his credentials (“I am a card-carrying dork. And I mean that literally. I have a card in my wallet. And it says, ‘dork’”) Lindelof then addresses the issue of whether “the suits” (the powerful yet clueless execs from Hollywood) have ruined the Con.

He goes on to outline the foibles that confirm their non-geekness (“Do they care about actual comic books? No way. Do they adorn themselves in Klingon battle garb? They do not. Do they often refer to vampires as ‘Draculas’? God help them, yes”) and states what he believes is really going on: The studios are deeply beholden to the fans that swarm Comic-Con: “Multibillion-dollar corporations are coming to San Diego so that we can put the stamp of approval on their latest movies and TV shows. That’s right: They’re looking to us — the very same people arguing over whether Ewoks live on Endor or its forest moon — to tell them what’s cool and what they should spend all that money making.”

Beyond the weight of sheer numbers, however, a more profound change may be underway in Hollywood: The nerds are taking over the corridors of power.

Monday’s New York Times profiled Marvel Studios president Kevin Feige, described as “one of the most powerful people in movies.” The success of the movie franchises based on Marvel’s comic book characters — in contrast to some of those based on characters from Warner Brothers’ DC Comics — is attributed in part to Feige’s abiding fandom.

The Times quotes Joss Whedon, the writer/director of “Dr. Horrible’s Sing-Along Blog” and director of the forthcoming film based on Marvel’s comic book series The Avengers, as saying, “Kevin is just a huge nerd. Possibly more than I am.” That’s high praise coming from Whedon, a man whose geek cred is unassailable.

While being cognizant of the need to reach a broader audience than just the hardcore fans, Feige believes in staying close to the original source material. As he put it, “If you actually open the comics, there is a lot of depth there.”

The importance of remaining true to original material when translating a comic book to the big screen was a refrain heard throughout Comic-Con. Dave Gibbons, illustrator of the highly praised Watchmen graphic novel, noted that even the colors in Zack Snyder’s film version of the tale reflect the palette of the original comic book series. Gibbons also lamented that the success of Watchmen seemed to foster the belief that to do well, a comic book must follow the same gritty revisionist view of comic book heroes that characterized Watchmen. “Don’t just do dark and gritty superheroes. Come up with something new,” Gibbons exhorted.

In his presentation at Comic-Con, The Dark Knight executive producer Michael Uslan echoed the same sentiments regarding movie adaptations of comic books. In a recent interview with Knowledge@Wharton, Uslan described a meeting with a studio production executive who staunchly asserted, “The lesson of The Dark Knight is that all comic book movies must be contemporary, dark, gritty and violent.” Uslan — himself a lifelong comic book fan — vehemently disagreed and responded, “No, the lesson of The Dark Knight is if you respect the integrity of the character and have a filmmaker who’s passionate about it, with a vision for it, who can execute it, then that’s what you do. Otherwise, you guys will be on a kick to do The Dark Ant-Man, The Dark Flash and Casper the Unfriendly Ghost. And all you will do is continue to violate the characters.”

In order to respect the material, however, you first need to understand it. Or even love it. That may be the real secret to Hollywood success in the realm of superheroes and comic book adaptations. And, if nothing else, Hollywood loves success.

In his piece in The Hollywood Reporter, Lindelof speculates that perhaps the nerds have now successfully infiltrated the ranks of the Hollywood elite. “Is it possible that some of the studio and network decision-makers are not just human beings but — gasp! — geeks, too?” He concludes that, indeed, they are: “Yes, my friends: We are the Body Snatchers. We are the V lizards. We have taken over the planet, and we did it from within.”

Perhaps the geeks shall inherit the earth after all. If so, Comic-Con is the beachhead for that transformation.