Even if you don’t speak the language of code and algorithms, finalists for the 2015 Intel Science Talent Search may have some useful insights for you. KWHS talks to several of the finalists about their projects and discovers a few common themes for anyone looking to embrace innovation and problem-solving -- namely, the value of passion, persistence and people who offer support. …Read More 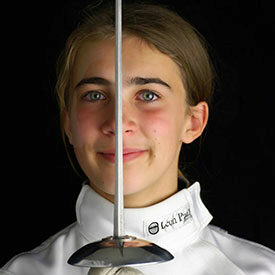 A fencer for the past five years, U.S. high school senior Anya Michaelsen of Burke, Virginia, wanted to understand the properties of an advanced fencing technique known as “the flick.” In this maneuver, a fencer delivers a hit using an angulated attack with a whipping motion that bends the foil blade around an opponent, allowing it to reach an otherwise inaccessible area, such as the opponent’s back.

Michaelsen wanted to study the flick and try to figure out what she could do to become better at the move. Using high-speed video analysis of fencers doing the flick combined with statistical analysis, Michaelsen examined how each element – the fencer’s body, blade and tip — affect each other in the move in order to optimize performance. “I took multivariable calculus and used it in my research to calculate variables. I also used basic geometry and trig,” Michaelsen says. “I really wanted to do research and the fencing came naturally as a topic, and I know that math is an integral part of research.”

One of 40 finalists for the 2015 Intel Science Talent Search (STS) pre-college science competition, Michaelsen’s study on the properties of the flick technique is an example of the projects completed by high school students across the country on topics ranging from melanoma treatment to human evolution to the effect of climate on bird species. Finalists head to Washington, D.C., in early March to compete for more than $1 million in awards from the Intel Foundation.

It All Started with Krypto

How do students go from an interest in science, math and technology to becoming some of the best and brightest young scientists in the U.S.? It all starts with passion and a desire to dig deeper. Michaelsen, a long-time math fan, remembers playing a card game called Krypto as a child that got her using math skills from an early age.

The sport of fencing – which is considered physical chess — complements her love of math and science. “It’s very athletic and a super mental sport that involves a lot of thinking to outsmart your opponent,” she says.

Alexander Lin, a high school senior from Millburn, New Jersey, says he was drawn to his STS research project tackling a famous problem in theoretical computer science because of its numerous applications in everyday society. Using the example of scheduling college courses into time slots without having certain classes, such as biology and chemistry, overlap, Lin created an algorithm that would help a university return a feasible schedule for assigning courses to their time slots, among other examples.

“Besides scheduling applications in biology and entertainment, this is a pretty common problem people come across,” Lin says of the challenge to assign a set of objects to groups with a set of restrictions. He had his first introduction to the problem during a computer science summer program at Princeton University. “I saw that this was a problem that I could not only understand in the mathematical world, but also understand in terms of applications I’m exposed to every day – it’s something I could relate to.”

Valerie Ding, a high school senior from Portland, Oregon, also took interest in a real-world problem with her research on quantum dot solar cells as a way to improve the efficiency of solar panels. “My project was an attempt to address a problem I saw in research and literature,” Ding notes. “Researchers want and lack a method to identify and theoretically simulate solar panels that are more efficient.”

Using Java and Python computer programming and her own novel algorithms, Ding studied how to increase the overall efficiency of solar cell systems and how the materials that constitute quantum dot solar cells might also maximize efficiency.

‘Mistakes Are Part of the Process’

The Intel finalists agree that problem-solving requires patience and persistence. From her first introduction to the field of quantum computing in middle school, Ding says she was able to grasp just enough of the material to stay motivated to learn more. Her persistence in understanding the complex subject matter was good preparation for her research experience, where she faced stumbling blocks and had to overcome challenges.

“It took me months to get results that were consistent,” she says. “My research was theoretical. I was working on a computer. When you’re programming thousands of lines of code, you have to basically check every line. Mistakes, and many mistakes, are part of the process.”

Lin recalls one point during his research when nearly two months of work went down the drain. “I was frustrated at that point,” he says. “Eventually I started over from scratch. My initial goal was to create something in a field I really liked and ultimately say I gave it my best shot. My interest in this field was a big reason why I decided to keep going.”

Problem-solving is part of all research, notes Michaelsen, who also ran into her share of coding stumbling blocks. She would take a step back, take a break, look at the big picture with a fresh set of eyes, and then dive back in step by step at a later time. “It’s really beautiful when it works,” she says. “The first time we plotted a graph and it looked exactly as it should, it felt so great to get it to work.”

The Power of Mentors

A student in the MIT PRIMES program for high school students, Noah Golowich of Lexington, Massachusetts, met a mentor who introduced him to a conjecture in the Ramsey theory of mathematics, a field that focuses on proving that if a large system is partitioned into many subsystems, then one of the subsystems must have a certain property. Golowich solved the conjecture in his project this year.

Through his work with faculty in the PRIMES program, Golowich gained a solid foundation in the field, and knowledge of what kinds of techniques had been used in the past and what types of problems the techniques worked for. “Having this knowledge and knowing what other theorems and methods were out there was one of the most important things I could have done,” notes Golowich.

Ding says two influential mentors helped shape the course of her research. “Having a teacher you know very well and you talk to every day, having that very literate scientist who knows the world of science can be very helpful in learning every part of the process – collecting data, finding errors, learning how to get published and how to present to a field of general scientists,” says Ding.

For Michaelsen and Lin, family members in their fields of research played an important role in providing inspiration and guidance along the way. Michaelsen’s father helped her with many components of her project and Lin comes from a family of academic researchers. He also points to a key mentor he met during a summer program at Princeton University who he says helped with his research over several years. “Having someone to guide you is very important in the process,” Lin says, “in terms of knowledge base and research, it’s something you need as a young, maturing student of academia.”

Lin credits his mentor with helping him to see the value of opportunities outside the classroom. “A key part of my own education is to start young and pursue something not offered at the high school level,” Lin says. “The earlier you know whether something is right for you, you can direct your own interest, try to reach out and go deep.”

After reading some of the examples of projects from Intel finalists, what do you consider the most important quality of a long-term researcher? Yes, they’re smart, but they’re also going into this without having all the answers. What gets them to the finish line?

Alex Lin says, “The earlier you know whether something is right for you, you can direct your own interest, try to reach out and go deep.” What does he mean by this? Have you ever explored a new opportunity in which you had to “direct your own interest?” What is the value of this? What did you learn from the experience?

Have you heard of STEM? Using the links below, research what it is. Now, consider STEAM. What is that and how is it different from STEM? Do you think the distinction between the two is a valid one? Why or why not?

Portfolio Managers: The Challenge Is Picking More than One Winning Stock