Monik Pamecha, 17, has earned thousands of dollars as a tech blogger and website designer. His web-based businesses, located in Mumbai, India, have taught him valuable lessons about marketing, teamwork and the fast-moving technology market. …Read More 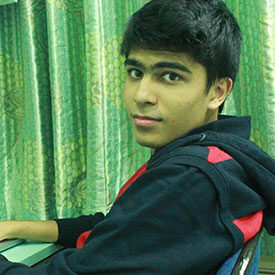 When Monik Pamecha was in the fifth grade, he wrote a funny piece in his newly launched site on Google’s Blogger about a classmate with a lot of body hair. He says his story, titled “Hairy Potter,” became an instant hit among his schoolmates. It started him thinking of bigger things, even dreaming of becoming India’s Steve Jobs.

Today, 17-year-old Pamecha runs a popular technology blog and an enterprise providing website design and social marketing services, both with modest revenues. His top distraction is being a 12th grade student at the Lilavatibai Podar Senior Secondary School in Mumbai, India.

Since the “Hairy Potter” story of 2005, Pamecha’s blog, www.etiole.com, has grown through several iterations into a popular site featuring technology news features and reviews of gadgets and services. It draws between 50,000 and 80,000 unique monthly visitors. Pamecha’s second venture is Etiole Media, a web design and social marketing agency that he founded when he was 13 years old.

For Etiole.com, Pamecha initially tapped bloggers he knew of to write and later publicly invited others on his site. It now has 20 regular bloggers from India, the U.S. and elsewhere who write between 10 and 15 posts in a typical month. The blog articles cover social media, devices such as tablets and smartphones, new media personalities and regulatory moves. Recent posts include a product review titled “Why the Samsung Galaxy S3 Won’t Fly in India,” a discussion on Mona Simpson’s eulogy in The New York Times for her brother Steve Jobs, and a useful cheat sheet for “How to Find a Song Name by Lyrics, Humming, Beats or Melody.”

The bloggers earn money through Google’s AdSense, which connects publishers with advertisers. So far, Pamecha’s own writings have earned him about $2,000, while the other bloggers have brought in a total of about $5,000 through AdSense.

Launched in 2003, Google’s AdSense feature uses a pay-per-click model to enable content publishers to attract advertising to their posts and to earn money. Publishers that sign up with AdSense paste a code and identify spaces alongside content on their sites for marketers to place relevant ads. Content publishers receive 68% of the money Google collects from advertisers. Pamecha signed up with AdSense four years ago after he read about it on a blog site. He had earlier experimented with similar online ad exchanges like WidgetBucks and AdBrite, but was not happy with the revenues they generated.

Etiole.com’s bloggers find it an attractive place to post their pieces for other reasons, too, notes Pamecha. Soon after its launch, the site achieved a Google PageRank of three out of 10, which he says is impressive for a new site; the higher the rank, the greater the probability of random web visitors stopping by to read blogs. Bloggers also like the audience demographic, which is 15 to 30 years old. Still, Etiole.com had low traffic in its very early days, and Pamecha knew he had to distinguish it from “the millions of other blogs.” He focused on improving his content’s quality, researching some 40 websites before writing a 500-word piece.

For Etiole Media, Pamecha assembled a freelancers’ team of 15 programmers and web designers from among friends and acquaintances. He offered each of them 100% of the revenues from their specific project contributions, such as programming or designing. For technology marketing advice, he tapped his friend Sandeep Bali, an expert in Internet marketing. Pamecha acknowledges that marketing is not one of his strengths, so he also tries to absorb what he can through reading. His favorite hangout is marketing writer Seth Godin’s blog. He especially likes that Godin compared a “remarkable concept or service” to a “purple cow” – one you would notice when the other cows are far less dazzling.

Etiole Media has thus far earned about $10,000 for Pamecha and another $18,000 for others on its team – all from 26 assignments. These involve website designs and promotions through social channels such as Twitter and Facebook. Clients include Merlin Digital, an electronics retailer in Dubai, and ActiveLifeNYC, a website that lists sports and other activities in New York City.

Pamecha’s entrepreneurship journey began when he was three years old. His father, Manoj Pamecha, enrolled him in a beginner’s class in computer skills for kids. In seventh grade, he learned the basics of HTML programming in a course at his school. He next discovered free video tutorials and e-books to learn computer languages and web designing.

As Pamecha grew up, he would spend hours at his home computer, falling asleep at times in school. He says he had his share of fun and games, too: “I did not miss a single party, and would play football, badminton and table tennis after school.”

Pamecha initially did not feel the need to make money from his ventures. However, when his monthly Internet bills shot up from an average Rs. (Rupees, the Indian currency) 1,200 ($US23) to Rs. 15,000 (US$280), his father admonished him. “I felt very bad,” he says. “I needed to get rid of this problem somehow.”

Soon, a law firm in Chennai, India, chanced upon his blogs and, after reading one of his tutorial posts about website design, asked him to create its website. When it mailed Pamecha an advance check for Rs. 4,000 (US$75), he took it to his father since he did not yet have his own bank account. The senior Pamecha says he was “shocked but happy.” Since then, Pamecha has funded all the expenses for his ventures. The only exception was a Rs. 500 (about US$9) payment that his father made for Etiole Media’s domain registration costs.

Manoj Pamecha runs a retail business in decorative lighting and chandeliers and confesses he does not understand much of what his son does. However, he set one condition: “Score 80% or higher in school exams or your computer and Internet connection go.” The younger Pamecha did not do well enough in his ninth grade year. He improved his scores the next two years, scoring 87% in his latest exam.

Pamecha cannot wait now to launch the next phase of his career in the U.S., where he has applied to several schools. He says the U.S. will be an ideal setting for him to be a student-entrepreneur. Rhea D’Souza, a teacher at his school, agrees: “He will constantly have ideas while studying and he needs to be in an environment where he can take those ideas to fruition.”

Pamecha wants to build a network connecting digital outdoor advertising billboards. This would involve creating an online back-end platform that connects digital billboards through a local area network. He would secure contracts with billboard owners to enable advertisers to select the times and locations for their ads.

He estimates start-up costs at Rs. 30 lakhs (US$56,000) and a 15% annual return in each of the first three years. “You need partners,” Bali advises. “You can never pay enough to a person who can pitch amazing ideas to investors.”

D’Souza feels he has “an innate ability to spot an opportunity and is very driven.” However, he needs to use his aggressive trait carefully, because some could perceive it as a threat. Bali advises Pamecha to slow down the flow of ideas to change the world and, instead, “do something very specific.” He thinks Pamecha’s concept of networking digital billboards is promising. “It’s a natural idea that will happen anyway. It needs to be done.”

If anything, Pamecha has learned not to procrastinate. “Speed to market,” he says, is especially important in the technology world, as long as you are also paying attention to the quality of your product. More than five years ago, he began thinking about designing a website for people to upload podcasts. A year later, somebody else (SoundCloud) beat him to it. “I was very slow and didn’t put my energy into it,” he notes. “The most important lesson I have learned is to be quick, regardless of what you are doing — responding to a customer, breaking news or designing a product.”

What are Google’s AdSense and PageRank? Why are they important tools for small business owners like Monik Pamecha?

What does Pamecha’s entrepreneurship journey tell you about today’s global market? Has the Internet made the world a smaller place? In what sense?

Name three valuable business lessons Pamecha has learned. How might they prepare him for his next venture?