While high school senior Matthew Sheffield gets sized for his cap and gown, he is also busy reviewing the metrics from his recent online Indiegogo campaign, during which he encouraged people to fund his idea for what he calls “the first interchangeable sunglasses.” He fell far short of his $25,000 goal, but values the experience in many other ways.…Read More 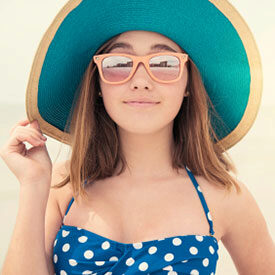 As Matthew Sheffield, 18, prepares to graduate from West Windsor-Plainsboro High School South in Princeton Junction, N.J., in June, he is reflecting on all that he has learned during his years as a student – math, science, English, history and, of course, the value of a strong social media strategy. That final lesson came as recently as a few weeks ago when the entrepreneurial Sheffield ran a $25,000 crowd funding campaign calling for financial support over the Internet to help launch his invention Shady Eyedeas, innovative sunglasses with interchangeable parts that enable wearers to switch lens, frame and arm colors as often as they’d like.

Shadys – as Sheffield calls them — have eight color options for both arms and the frame, plus four color options for the lenses. Wearers who buy two pairs will have 16 possible combinations of glasses. With three pairs, the possibilities expand to 81. Buy the whole line, and Shadys offers 2,048 color combinations.

Sheffield launched his fundraising campaign on Indiegogo, a crowd funding website similar to Kickstarter, in April by creating a page featuring information about Shadys and links to various social media outlets. Interested investors make pledges through the online platform. He set out to raise $25,000 by May 5 as a way to finance the production phase of his venture, offering early funders a discount on Shadys as incentive: for example, a $25 pledge bought you a pair of Shadys, which would normally retail for $30. By the end of his campaign, Sheffield fell far short of his goal, raising $1,849 from 26 funders, which he says included family, friends, social media connections and Indiegogo browsers.

Sheffield, who is grateful for the support – “They’ll be the first ones to receive these sunglasses” – still considers his campaign a success. “Not only did I raise over $1,800, but I also received a lot of attention and gained potential future customers, including social media followers,” notes Sheffield, who built up his Twitter and Facebook accounts in the weeks leading up to his crowd funding campaign, and featured product information on YouTube. “Now I have a digital footprint as a result of all the media attention. You have people viewing the [design], talking about it in the comments [‘Really brilliant!’ ‘Best of luck to you!’] and contributing to the same fund, which allows others to gain confidence in an idea that is still in its infancy.” Sheffield, a long-time fan of the crowd funding community, chose Indiegogo over other popular sites because it gave him the option to keep most of what he raised (the site took a 9% commission), even if he fell short of his goal. Other sites refund investors when goals are not met.

The development of Shady Eyedeas’ online campaign was a process that began several months ago. Sheffield — who has started other entrepreneurial ventures, including auction-based ecommerce sites and Friend Lock, an Android app to keep a person borrowing your smartphone from accessing personal emails, photos and the like — hired an engineer to help him develop his finished product and filed for a provisional patent about a year ago. Then he researched both marketing and crowd funding and made sure his manufacturing options were lined up before he put his prototype on display. “I didn’t want this to be a project that ended up taking longer than I thought (to deliver), or one that offers a product that looks nothing like what was promised,” he says.

Sheffield was smart to do his homework. According to research by Wharton Prof. Ethan Mollick, who studied about 46,000 projects on Kickstarter, successful projects were, on average, anywhere from one to two months late in delivering their goods. Only one project out of four delivered on time.

‘I Think It’s a Great Model’

His goal now is to begin producing the sunglasses, ideally domestically so as to avoid his designs ending up on overseas black markets, and fill the orders for his Indiegogo funders, which he has promised to deliver in July. “I’ve hired a second engineer for Shadys and I’m redesigning the parts to make it simpler and faster to manufacture,” he says, adding that during the campaign he connected with a sunglasses distributor in Canada who has worked with other companies on crowd funding websites.

Sheffield is headed to Lehigh University in Bethlehem, Pa., this fall to study business, with a plan to end up in a finance career. He anticipates leveraging resources there, including a 3-D printer to make new Shadys prototypes, to refine his design. Although he wants to continue his entrepreneurship, Sheffield says his business ventures thus far have helped him refine his career plans. “With each business, I get more toward the path I want to go down,” he notes. “I like finding product needs that are unmet in the marketplace, working on those and making a name for myself. I see Shadys as something I can take further than I took my other businesses.”

As for campaigning over the Internet? “I’m not going to do another crowd funding for Shadys. But if another idea arises, I think it’s a great model,” says Sheffield. “I liked that Indiegogo offered me different options when it came to showing me statistics and metrics about who I’m referring, the people who are [buying] into the idea, and where referrals [are coming from], like news outlets. The community is really well put together. If I were to do it again, I would be able to do a trial and error on social media — which posts work best, what hours to post them, what is the best way to approach journalists. It was a great learning experience.”

What is crowd funding?

Have you ever participated in any way in crowd funding? How? Was it successful?

Though he fell far short of his money-raising goal, Matthew Sheffield considers his crowd funding campaign a success. In what other ways did it help his idea and improve his skills?

How is the relationship between business and social media changing? Do businesses need social media to survive and thrive? Why or why not?