Science education is all the rage these days. Any chance he gets, President Barack Obama talks up the importance of nurturing better science students to help the U.S. compete globally. Some of America’s top teen inventors are here to tell you that gone are the days of geeks in white lab coats. Today’s scientists are on the front lines of developing technology that fundamentally changes culture and society.…Read More 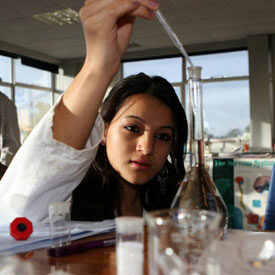 The deficiency of good science students in the U.S. is curious, especially in a country that has long been the world’s leading center for innovation. Knowledge@Wharton High School set out to talk to some of America’s teen science superstars to understand their motivation and commitment. Erika DeBenedictis, Sophie Swingle and Nolan Kamitaki were among 10 teens featured in the Sept. 2010 edition of Popular Science magazine’s “Annual Scouting Guide to the Top High School Inventors.” These high school science celebrities, all of who have now moved on to college, built strong foundations in science and took their interest to innovative heights with inventions that got people talking.

Excellence in science doesn’t necessarily start at an early age; it can be an acquired taste. “For a long time I never considered science as something I might do for a career,” says DeBenedictis, a Cal Tech freshman from Albuquerque, New Mexico who graduated last spring from Albuquerque Academy. “As a little kid, I wanted to be all the standard things: a ballerina, a teacher, a choir director.” Nor is science without its frustrations: “My junior year in high school,” says Swingle, a graduate of McCurdy High School in Espanola, New Mexico. “I remember coming out of my room [when I was struggling with my invention] and saying, ‘That’s it! Next year for the science fair I’m making a volcano!’” Swingle is now a freshman at the University of San Diego.

Despite the initial hiccups, DeBenedictis, Swingle and Kamitaki continued to challenge their science knowledge. Kamitaki, a graduate of Waiakea High School in Hilo, Hawaii, who is now a freshman at Harvard College, “signed up for four AP [science] classes as a sophomore.” Swingle participated in science fairs and “won a bunch of money.”

And yet these students didn’t find the Popular Science spotlight by just going to class on time. They pursued science-related endeavors outside of school and entered top competitions, which shaped their destinies as successful young inventors. “Our culture thinks of science as a structured task, an unforgiving empirical process governed by formulas. It’s not. Science is an art,” says DeBenedictis. “Most high school science classes miss the entire point of science; it’s all about learning things you’re fascinated by and creating something new.”

And create they did.

The Hawaiian Kamitaki was worried by how swine flu would spread throughout communities, so he developed a computer simulation that looked at how young people, who are the most active and mobile in a community, would be the biggest spreaders of the epidemic and thus should be first in line to receive treatment. Kamitaki’s software, which accurately predicts how the disease will spread through a town based on social networks, won him a first-place prize of $3,000 at last year’s Intel International Science and Engineering Fair.

Swingle, from “middle of nowhere” Abiquiu, NM, was concerned for the lives of trapped miners after Utah’s Crandall Canyon Coal Mine collapsed in August 2007. She heard that the miners’ radio devices couldn’t transmit through coal, so she used a newfound interest in electrical engineering to develop a handheld, low-frequency device that could send a distress signal up to 500 feet.

DeBenedictis’s dad is a computer scientist who teased her in 5th grade by giving her “Richard Feynman’s Lectures on Computation,” not thinking that she would read it. Feynman was an American physicist known for his work in quantum mechanics. Years later, she recalled her readings on travel in outer space to map the gravitational fields of the planets and asteroids and how they could be used to make space travel more efficient. Her invention, navigation software designed to help astronauts explore the cosmos with minimal fuel, won her the $100,000 first-place prize in the annual Intel Science Talent Search in 2010.

The Power of Programming

Each of these young inventors relied on their support network to achieve science success. Kamitaki worked with one of his high school teachers and used the computers in his dad’s office when no one was around, while Swingle leaned on her grandfather, a graduate of the Naval Academy at Annapolis, as she investigated various fields.

Science can be an expensive hobby, yet Kamitaki points out that “funding was never really a factor.” Broad support exists for promoting teen achievement in the sciences. Swingle found a local research company called Stolar Research “that was incredibly helpful … and let me use all of their equipment.” The quickest way to success, say the teen inventors, is the computer. “The ability to program was the pivotal, practical skill that allowed me to do science research despite being ‘only’ a high school student,” says DeBenedictis. “If you can simulate something, you are well on your way to understanding it, even if the physical experiment is inconvenient, impractical or impossible.”

The greatest motivators are passion, curiosity and the “cool” factor. “You get to explore new ideas that often include lasers, giant rockets, deadly pathogens and liquid nitrogen,” notes DeBenedictis, who counts meeting President Obama among her accolades. They each plan to invest their love of science into lasting careers. Swingle wants to be a Navy fighter pilot, Kamitaki plans to pursue a job with a venture capital fund and DeBenedictis hopes to land in the private space industry. “It’s up to the current generation to take up the mantle from the great American scientists of the 20th century and build upon their accomplishments,” says Kamitaki.