Right up there with major milestones in a teen’s life -- like the prom and getting a driver’s license -- is your first job. Even better? Your first paycheck. But before you make big plans for spending that hard-earned cash, make sure you are prepared to deal with the harsh reality of gross pay versus net. Your check will likely be much less than you expected. Here’s a look at where it all goes.…Read More 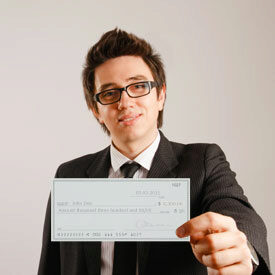 At the end of last summer, Allie Drake, a senior at Montgomery High School in Skillman, N.J., decided to take on a part-time job for extra money. While she was only working a total of six hours a week at a local after-school childcare center, she still eagerly awaited the arrival of her first paycheck. “I was making a little more than $11 an hour and I had worked 12 hours, so I was excited to get a paycheck for over $100,” says Allie, who is 18. But when she opened the envelope on payday, she was stunned. “The check was only around $80,” recalls Drake. “I was pretty upset.”

It is a painful reality of the working world: What you earn is often not what you keep. You can avoid Drake’s pay stub dismay by understanding that gross income is the total money you earn in a particular pay period and net income is the portion of those earnings after deductions that you actually get to take home.

“The first paycheck someone receives is always quite a shock,” says James Medlock, director of education and training at the American Payroll Association (APA) in San Antonio, Tex., which helps students understand their paychecks. “Not a lot of education goes on about the taxes that are withheld and what they’re for — whether it’s the federal income tax, Social Security and Medicare taxes, or state and local taxes — all eating away at your paycheck.

A Different Kind of Allowance

Top on the APA’s awareness agenda is the required paperwork allowing you to get paid. “The W-4 form tells your employer the factors that are going to be used to calculate federal income tax,” notes Medlock, adding that income tax withheld from wages is based on the amount of wages minus an amount for declared withholding allowances. “Employees claim allowances depending on their personal situation — a spouse who works, dependents, itemized deductions on their personal income tax return, and so on.

For example, if an employee claims ‘Married’ on form W-4 for the same income as someone who claims ‘Single,’ the married employee will have less federal income tax withheld. The worksheet that the Internal Revenue Service (IRS) provides with the W-4 form shows all of the ways that allowances can be claimed.” The more allowances that you claim, the lower the taxes that are subtracted from your gross pay. The other option on the W-4 form is to tell your employer that you are exempt from paying federal income tax, which applies to few workers. “Students often don’t claim exemptions because they are being claimed as dependents on their parents’ income tax returns,” adds Medlock.

The other required form is the I-9, which tells an employer that you are eligible to work in the United States. Proper documentation, like a driver’s license and Social Security card, is required to complete this form.

Here are some of Medlock’s paycheck pointers:

If the alphabet jungle on your pay stub – FT, SSWT, MWT – is just too confusing, speak up, urges Medlock. “Payroll professionals are very willing to answer any and all questions.” Don’t suffer paycheck sticker shock in silence.

The College Investment: Will It Pay Off?