During the 2014 State of the Union Address on January 28, U.S. President Barack Obama talked about the accomplishments of one of his invited guests, 16-year-old Joey Hudy. Who is this wonder teen? Here’s a hint: Think shooting marshmallows. …Read More 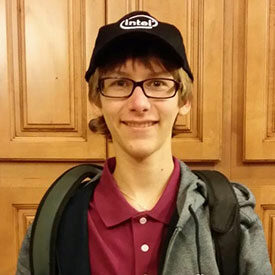 Back in February 2012, a high school freshman and engineering whiz from Anthem, Ariz., made quite an impression (picture sticky marshmallows oozing down the White House wall) on U.S. president Barack Obama. Joey Hudy, then 14, was attending the second White House Science Fair to showcase his invention, an extreme marshmallow cannon made from PVC pipe that used compressed air to shoot marshmallows 176 feet. At the time, Obama, who launched a marshmallow across the East Room, reportedly took one of Hudy’s cards and told him, “You’re going to invent all kinds of impressive things.”

Fast forward a few years, and Hudy’s visibility has, well, exploded. Last April, Business Insider magazine named him one of the world’s 10 smartest kids. Then Intel CEO Brian Krzanich is said to have hired the now 16-year-old on the spot last October to become the youngest participant in the semiconductor chip maker’s internship program in the summer of 2014. On his blog dated December 16, Hudy wrote, “Today I attended Intel new hire orientation!” He added that he couldn’t wait to start making “cool stuff.” After school is out, Hudy will join Intel to intern in the company’s New Devices Group product development program before returning to school next fall.

But before he even heads to Santa Clara, Calif., for his internship, Hudy will be back in the White House as one of President Obama’s 25 invited guests at the State of the Union Address on January 28. According to the White House, invitees are considered “extraordinary Americans who exemplify the themes and ideals laid out in the State of the Union Address.” Other 2014 guests include Jason Collins, an NBA player who became the first male player in major American team sports to come out openly as gay, and Carlos Arredondo and Jeff Bauman, survivors of the Boston Marathon bombing. Hudy’s spot alongside the First Lady, Michelle Obama, is no doubt a testament to Obama’s focus on STEM (science, technology, engineering and mathematics) education as a priority for his administration. Hudy embodies Obama’s “Educate to Innovate” campaign aimed at driving American students to become leaders in science and math achievement by 2019. Hudy says his proudest inventions are LED Arduino shields — printed circuit expansion boards that he shows people how to make on his blog.

Hudy spends much of his time traveling the circuit of Maker Faires, which are family-oriented invention festivals, and lives by the credo, “Don’t be bored; make something.” As his blog points out, “I have tried to do karate, soccer, baseball, tennis, but none of them I am good at or completely like. The only thing I am good at is making things, I am ok at archery though and I like it.” In an age of innovation, this aspiring engineer – who also happens to have Asperger’s Syndrome, a form of autism that he does not consider a handicap – has the right talents for the times.

Why is Joey Hudy invited to President Obama’s State of the Union Address?

Why is innovation or the ability to “make things” so important these days? How is this connected to Hudy’s new internship with Intel? Why do you think Intel’s CEO hired him on the spot?

Have you created a new invention that you would like to share with the world? What is it? If not, have you been thinking of inventing something new? Share your ideas with a partner and with the class.

One comment on “Who Is Joey Hudy, Boy Genius, White House Guest?”

Breakthrough Summer: Sparking Knowledge at the Front of the Classroom