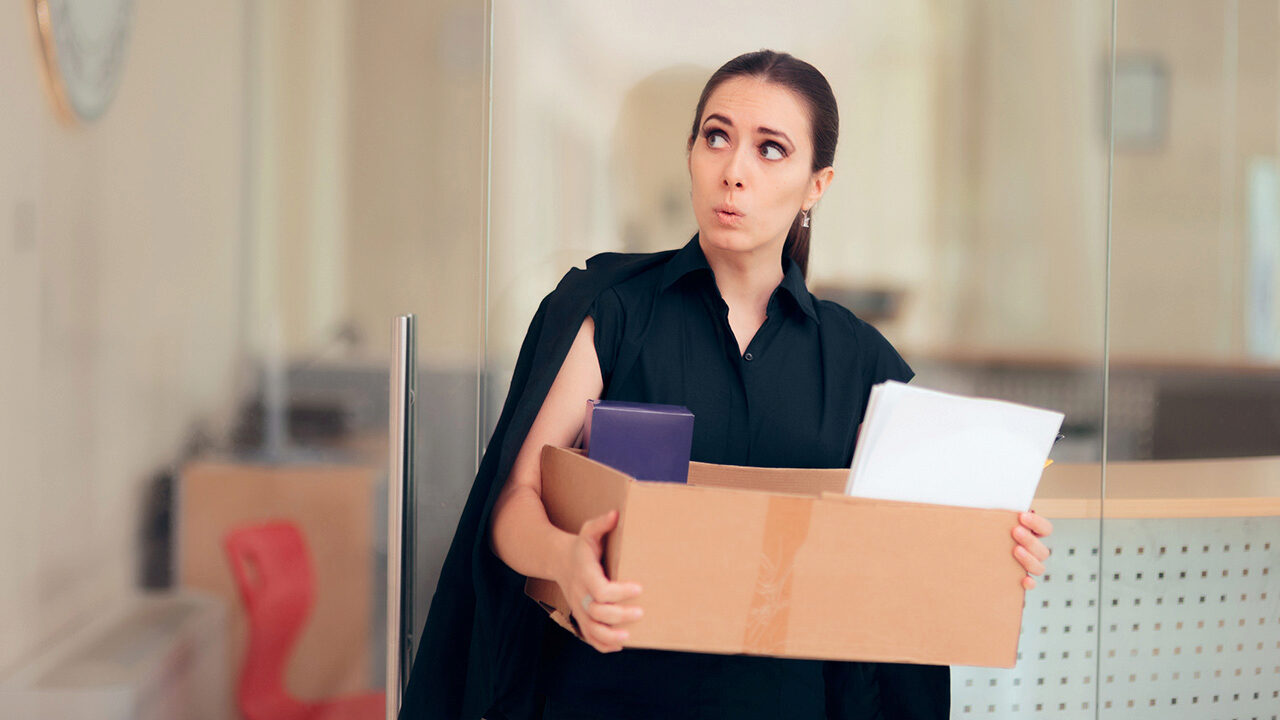 Ghosting is by no means a new trend. Many of us know it all too well – whether it happened on a dating app or during an actual budding romance with a boyfriend or girlfriend. Ghosting is where one person completely stops communicating with another without any explanation. You keep checking your phone for a response to your text – and it never, ever comes. Not even a good-bye.

Now, consider that practice in the workplace. In the 1999 film Office Space, disgruntled software engineer Peter Gibbons tells his new love interest, Joanna, that he hates his job and doesn’t want to go anymore.

When Joanna, played by actress Jennifer Aniston, asks Peter whether he is going to quit, he responds, “Not really, I’m just going to stop going.”

What may have been a funny fictional story line 20 years ago is now becoming an increasingly common reality as more employers report being “ghosted” by job applicants and even by employees who simply disappear without a trace. In fact, the Federal Reserve Bank of Chicago cited an uptick in ghosting in its December economic activity report, and an array of media outlets — including The Washington Post, Inc. and Business Insider — have been publishing stories recently about the pitfalls of the practice.

“Candidates agree to job interviews and fail to show up, never saying more,” Wall Street Journal reporter Chip Cutter wrote in a June article for LinkedIn that garnered more than 5,000 comments. “Some accept jobs, only to not appear for the first day of work, no reason given, of course. Instead of formally quitting, enduring a potentially awkward conversation with a manager, some employees leave and never return. Bosses realize they’ve quit only after a series of unsuccessful attempts to reach them.”

As this bad behavior spreads from the personal to the professional realm, it raises questions about business etiquette and the shifting balance of power between employers and employees. Wharton management professor Peter Cappelli, who is also director of the school’s Center for Human Resources, believes ghosting reflects a change in today’s work environment, where employers once held all the cards and often treated hiring as “a commodity exercise.” Today, the job market is strong, and therefore employees have more power and influence.

“When the labor market tightens, the power does start to shift,” said Cappelli. “I think part of the reason this is so surprising to employers is we’ve gone through the 10 years of the worst labor market for job seekers, but the best labor market for employers and hirers. You know, you didn’t have to do anything, and people were just really grateful that you’d even consider their application. So, the power has changed, and that’s changing the story.”

Cappelli and Jay Finkelman, professor and chair of industrial organizational psychology in business at the Chicago School of Professional Psychology, spoke about ghosting to the Knowledge@Wharton radio show on Sirius XM. The following are key points from their conversation.

It Works Both Ways

Maybe it hasn’t been given a clever name, but ghosting during the application phase has been common among hiring managers for years. They get piles of applications from job seekers, especially online when they submit résumés electronically, and may or may not acknowledge them – or follow up to express their interest or disinterest in particular candidates. Applicant-tracking software did most of the sorting work. Companies have been engaging in the practice of ghosting for so long that it has become perfectly acceptable for them, the professors said. And with the prevalence of online applications, job candidates have gotten comfortable with the fact that they probably won’t hear anything back from a company – positive or negative.

Cappelli cited a recent survey by HR firm Clutch that found 40% of employees believe it’s reasonable to ghost companies during the interview process, especially in the early stages. He likened it to putting an item in your Amazon shopping cart but never completing the purchase.

Finkelman said it comes down to reciprocity.

“There is a feeling that this is more OK because it’s exactly what employers do,” he said. “Businesses just grind through potential applicants and make determinations and decisions that are in the best interests of their clients and not necessarily of the applicants. And that message gets conveyed through.”

To be fair, Finkelman said, employers simply don’t have the time to reassure every candidate in the pipeline. That lack of investment can make candidates and existing employees feel fine about ditching without notice.

Driven by the Tight Labor Market

Both professors said the increase in ghosting is also an indicator of just how tight the job market has become. Unemployment is below 4%, and employers across many sectors report that they can’t find enough qualified candidates to fill jobs. https://www.nytimes.com/2018/12/07/business/economy/hiring-slowdown-job-market.html It’s a situation that gives employees more leverage.

“I think there’s no question that it’s the environment that encourages that behavior,” Finkelman said. “Will it revert back to better manners possibly next year, 2020, when recessions are being predicted again? It will move in that direction inevitably as that ratio of job openings to candidates shifts.”

But the unemployment rate doesn’t tell the whole story, according to Cappelli. Few employers are interested in hiring someone who doesn’t already have a job, so there’s a lot of pilfering of employees across industries.

Cappelli calls them “passive applicants,” people who aren’t necessarily looking but find better offers and head for the door. A majority of people hired last year fell into this category, he said.

“That really starts to change the dynamic a little here, and also the moral question [about ghosting],” Cappelli said. Employees who are approached frequently by recruiters will respond differently – i.e., more likely to ghost — than those who are desperately looking for work.

Finkelman is bothered by what he calls an “underlying lack of concern about the welfare of others” when it comes to ghosting because the job market seems to rule over individual morality.

“I think the changing job market is more likely to influence the frequency with which candidates solicit other jobs or make changes, rather than the behavior that they engage in when they’ve made a decision to take another job,” he said. “In other words, they do it in a classy way or do they do it in a tacky way?”

It Has Little Consequence for Employees

American workers have grown up with traditional advice about the workplace: Always give two weeks’ notice; never burn your bridges; don’t speak badly of your former employer. Such platitudes have waning relevance in the ghosting era because there’s little consequence for employees and applicants who drop everything and leave.

“As long as there are more job openings, the likelihood of getting caught in this is relatively small,” Finkelman said, referring specifically to job candidates who ghost potential employers during the hiring process. “And when it does happen, it’s satisfying for employers when someone comes back to them and they tell the applicant, ‘No, that’s already been taken. And if you don’t recall, you didn’t call us back.’”

Cappelli said the average recruiter gets 200 applications per job posting. That pile has to be whittled down to a smaller set to be reviewed by a hiring manager. If an applicant ghosts then reapplies later, the odds of being remembered or even reviewed by the same recruiter are slim.

“You shouldn’t do it because it’s the wrong thing to do, but the idea that you’re going to pay a price for doing this is kind of wishful thinking on the part of the recruiters,” he said. “How many thousands of applicants do they see each day?”

But ghosting is not OK. It may be accepted, but that doesn’t make it right, the professors agreed.

“This is just not a good thing to do for either side,” Cappelli said. “It’s not a good thing for employers to do. They do it as a matter of policy because they think it’s easier not to respond to all these applicants. And for individual applicants or candidates, it’s not a good thing, particularly at the point where it becomes personal, where you have some tie, some conversation with a human as opposed to applicant-tracking software.”

Jay Finkelman says, “I think there’s no question that it’s the environment that encourages [ghosting] behavior” in the workplace, referring the the current tight labor market. Do you agree or disagree? Do you think that younger workers have a different outlook on employment and are possibly more likely to “ghost” an employer? Is it a generational thing? Why or why not?

How do you feel about ghosting during the hiring process? A potential employer calls to set up an interview and you never call back. Is this acceptable? What about ghosting when you’ve already been hired or are an active employee? Is it OK to just leave for another opportunity without letting anyone know?

Both professors feel the ghosting trend will reverse when the balance of power shifts again and there are fewer jobs to be had. Do you feel this trend is temporary or is it here to stay?

One comment on “Workplace Etiquette: Would You ‘Ghost’ Your Employer?”