Tools for the Tank: Tips from World Record Holders in Fuel Efficiency

Fuel economy is a much-discussed topic among those looking to save money – especially with the unpredictable and often escalating fuel prices. Even if you can’t afford a hybrid vehicle that runs on both gasoline and electricity, you can cut fuel costs through better purchasing and driving habits. Helen and John Taylor, who have 46 Fuel Economy Driving World Records, share their secrets for saving at the pump.…Read More 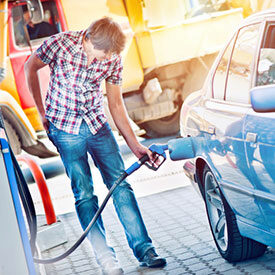 Like many college students, Kirsten Anderson, a nursing major at Seton Hall University in South Orange, N.J., sees her car as a precious commodity.

Her ride, a 2003 Ford Focus that she paid for herself, has a combined EPA fuel economy of 23 Miles Per Gallon (MPG). A good rating is anything between 20 and 30, though 25 and over is ideal. Set by the U.S. Environmental Protection Agency, the EPA fuel economy is based on tests and refers to how many miles a car can be expected to travel on one gallon of gasoline. The combined number is an average of two figures: City Miles Per Gallon and Highway Miles Per Gallon. The figures are different because one test is intended to simulate an urban driving experience with multiple stops, while the other models a freeway driving experience with steady speeds and no stops.

With work and school 19 miles away, Anderson puts gas in her car weekly. Although she doesn’t always fill the tank, when she does, a stop to fill up can cost $40. “Gas is expensive, and living in an area where most stores and shops are 15 to 20 minutes away, gas is used up quickly,” Anderson says, adding, “I am always looking to save money on gas. For example, I pay attention to gas prices to find the cheapest station, and I look for ways to make extra gas money.” Gas prices at the pump, which have been notoriously unstable in recent years and are often on the rise, are impacted by a number of complex factors — among them, speculation that demand for oil will either increase or decrease and uncertainty over whether or not there are temporary supply shortages – caused by, for example, U.S. refineries shutting down due to natural disasters.

Around the World on 24 Tanks

Fuel economy is a much-discussed topic among those looking to save money. Even if purchasing the latest hybrid vehicle (which runs on both electricity and gasoline) is not in your budget, there are many other ways to cut fuel costs through better purchasing and driving habits.

Perhaps the most obvious way is to buy a car with fuel efficiency in mind. “The teenagers we know are financially not well off, so it makes sense to purchase a smaller, more efficient car with good fuel economy,” says mileage expert Helen Taylor. “There are many cars in the U.S. that return great MPG figures, are affordable to drive and would make a good starting point for any teenager, no matter what their budget.” Taylor, along with husband John, runs the Smarter Driving Fuel Efficiency Program in Melbourne, Victoria, Australia.

Never underestimate the power of the MPG figure. Assuming 15,000 miles of annual driving and a fuel cost of $3.36 per gallon, the cost difference between driving a car with 20 MPG and one with 30 is $840/annually, according to a U.S. government site, www.fueleconomy.gov. As gas prices continually fluctuate and have historically risen, this number could be significantly larger. According to inflationdata.com, the average cost of gas by month in the U.S. has risen to as high as $4.00 a gallon in 2008 and has more recently hit $3.85 and higher.

However, even if your first car purchase isn’t exactly the EPA’s top fuel economy pick, it is not necessarily doomed to be a gas guzzling money pit. MPG figures are not the end of the story, notes Helen Taylor, who has come to know a thing or two about fuel economy. She and John – known as the world’s most fuel-efficient couple — are credited with 46 Fuel Economy Driving World Records, including driving around the world in 78 days and on only 24 tanks of gas.

Impossible? Not at all, say the Taylors. In order to meet the challenge, the couple used a VW Golf FSi 1.6 vehicle and the knowledge of a dedicated seven-person crew that included a fuel scientist and maintenance experts. In 2006, the car traveled on a carefully planned route through 25 countries across Europe, Asia and North America, traversing more than 18,000 miles and using only Shell’s Fuel Economy Formula Fuel. Although challenged with 50 fill-ups, the couple completed the task using only 24.4 tanks of gas. The VW Golf FSi has a 36.75 US MPG, but the Taylors averaged 52.27 MPG, according to the couple.

Through their educational programs, the Taylors have worked with large corporations around the globe to improve the fuel efficiency of their drivers, saving companies as much as $6 million a year on fuel costs. Their tips have also helped individuals. “Most drivers attending our fuel economy clinics save between 10% and 50% off their weekly fuel bill, based on slightly changing their driving habits. Everyone can do it. You don’t have to do anything [special] with your car and you can start to save today,” says Helen Taylor.

While other tricks can help you save fuel costs no matter what the advertised MPG, the Taylors offer their top three most effective strategies.

What is EPA fuel economy and how is it determined?

How have Helen and John Taylor proven the power of the MPG?

Do you agree or disagree with the Taylor’s assessment of Shell as the most efficient fuel? Why or why not?

10 comments on “Tools for the Tank: Tips from World Record Holders in Fuel Efficiency”