Lisa Cheung, 17, spent part of her summer in Nicaragua and discovered the importance of supporting fair trade, a movement that advocates the payment of higher prices to producers in developing countries. Companies devoted to fair trade “dedicate their businesses to creating positive change for the poorest of the poor.” Kantara Crafts, which buys and sells hand-crafted Moroccan Rugs, is one such business.…Read More 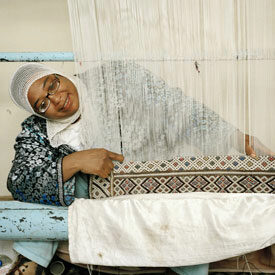 This summer Lisa Cheung, a senior at the Academy at Palumbo high school in Philadelphia, Pa., spent a few weeks in Nicaragua building a school with the nonprofit organization BuildOn. Cheung returned home with a better understanding of the Central American culture, a deep appreciation for water – which was scarce in her village when the pump ran dry – and a commitment to spread the word about the importance of buying fair trade products.

“I wondered about my host family’s income,” says Cheung, who is 17. “It occurred to me that the overwhelming amount of coffee plants I saw contributed to the majority of their income. We were told that during the [coffee bean picking] season, it is so important that the children even skip days of school to help their families collect coffee beans and do other tasks. If it was not for fair trade, they would not receive [a fair] wage for their hard work.”

Cheung’s interest in wages and work speaks to one of the 21st century’s most pressing global economic issues. Fair trade is a movement in the business world that advocates the payment of higher prices to producers in developing countries. Products that we use every day, from clothing and jewelry to chocolate, coffee, sugar and bananas, are often sourced from poor, rural areas of the world where laborers and artisans are not given the same economic and social opportunities as workers in more developed regions. According to Bread for the World, which is focused on ending hunger globally, an estimated 1.4 billion people worldwide exist on less than $1.25 a day.

Companies that embrace a fair trade market strategy recognize and respect the work that occurs in these countries by paying promptly and fairly, supporting safe working conditions, protecting children’s rights and respecting cultural identity. Some big-name companies that support fair trade include Starbucks Coffee and Ben & Jerry’s ice cream. Sam’s Club recently became the first national retailer in the U.S. to sell a fresh fair trade bakery item – pound cake made with fair trade-certified sugar. The Fair Trade Federation, one of the associations that promotes the movement among businesses in North America and requires member companies to adhere to nine fair trade principles in all of their transactions, says fair trade companies “dedicate their businesses to creating positive change for the poorest of the poor.

Alia Kate is a devout fair trade business owner. Her New York City company, Kantara Crafts, is certified through the Fair Trade Federation and is a top source for hand-woven Moroccan carpets in the U.S. Kate buys the carpets directly from Moroccan artisans – all women — and sells them to consumers in the U.S. through private transactions.

Kate first discovered her passion for hand-woven rugs while working for a consulting firm in Morocco that fought against child labor. Her travels led her into the rural villages, where she discovered the ancient art of carpet weaving. Women spend their days sitting at large looms producing intricate rugs of exquisite colors and designs, which are then sold on the open market. “I met a lot of women responsible for making the rugs and noticed a disconnect between the production of the carpets and how they were actually sold,” notes Kate. “The women relied on these middlemen, who would buy their carpets for a fraction of the price that it cost to make them. [The rugs] would end up in bazaars in places like Marrakesh, where the tourists were spending a significant amount for them. Very little of that money made it back to the women who were responsible for making them.” A typical 5 by 7 carpet might sell for more than $2,000 in a bazaar, while the artisan would only earn a few hundred dollars, barely enough to cover material expenses.

Kantara’s mission is to establish long-lasting relationships with the artisans and to buy rug collections directly from women’s weaving cooperatives in Morocco, formed so women can support each other in their work. During Kate’s regular visits to Morocco, she runs fair trade workshops and educates women about the market value of their hand-woven products. “For me, one of the most important things is making sure that the artisans receive money not only for the materials, but also for their time and creative input,” says Kate. “Also, you’re not taking something from them without acknowledging their role in creating it. It’s a sense of pride when I can go to customers interested in my carpets and tell them the name of the woman who wove the rug they’re looking at.”

Kate also sees her commitment to fair trade Moroccan rugs as a way to preserve a cultural tradition. “The older generations know all of these skills because they have been passed on from their mothers and grandmothers within the designs, colors and patterns. There’s a rich language of cultural identity, and each village has its own unique style,” she notes. “But we’re at a point where the younger girls are choosing to do a less-strenuous and demanding craft because they see that their mothers aren’t being compensated for the work they are doing.”

Fair trade will continue to evolve, says Kate, as people acknowledge business’s social bottom line. While some critics contend that little of the extra money paid by consumers reaches farmers and other producers, the movement is growing. “Fair trade is just a starting point,” notes Kate. “Young people have the task of bringing it to the next level and making it a part of everyday.” This means being mindful of fair trade products – priced higher than others — when you hit the mall. “I do not have the luxury to purchase fair trade products on a regular basis, but I do make the effort to do so once in a while,” says high school student Cheung. “There is a variety of fair trade products, it’s not always bananas and chocolate. The Body Shop [retail beauty products] is a great place to shop for fair trade products, too!”

Who is Alia Kate? What does she mean when she says, “I met a lot of women responsible for making the rugs and noticed a disconnect between the production of the carpets and how they were actually sold.”?

Do you buy fair trade products? If so, how did you learn about them? Will you buy them now? Why or why not?

Now that you’ve read this article, also read “Social Entrepreneurship Spotlight: The Face Inside Your Coffee Cup,” which you’ll find in the Related KWHS Stories tab. What are three takeaways you learned about fair trade practices?

One comment on “Economic Partnership: Coffee Beans, Moroccan Rugs and the Future of Fair Trade”

Jennifer Barrett of Acorns with 5 Facts about Fintech