In late January 2012, high school students from across the country met up at MIT to see their knowledge and hard work in action – on the International Space Station – at the Zero Robotics SPHERES Challenge. While programming robots was fun, the students were also learning what it takes to be successful in a high-tech career.…Read More 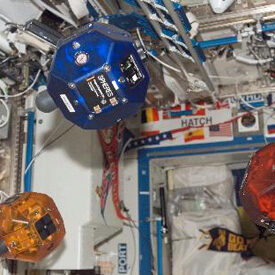 Talk about a wild weekend. At the end of January aboard the International Space Station — a satellite in Earth’s orbit — astronauts were forced to fire the craft’s thrusters to dodge space junk from a destroyed Chinese satellite. The space station is currently home to a six-man crew that includes three Russians, two Americans and one Dutch astronaut. Considering that the National Aeronautics and Space Administration (NASA) and the U.S. military’s Space Surveillance Network track 500,000 pieces of space junk daily in order to avoid collisions in orbit, this particular dodging maneuver was fairly routine.

While the International Space Station may seem distant and inaccessible to most, more than 100 high schools students from across the U.S. had their eyes and ears directed toward Earth’s orbit in late January 2012 as participants in the Zero Robotics SPHERES Challenge. The competition finale, which took place at MIT in Cambridge, Mass., on January 26, involved 27 teams of high school students with a penchant for computer science and robotics. Students were charged with programming software code that enabled miniature basketball-sized satellites called SPHERES (Synchronized Position Hold Engage and Reorient Experimental Satellites) aboard the International Space Station to find tools, reach imaginary asteroids and collect a sample of Helium-3 and deposit it in a virtual processing station.

The final heats of the tournament last week took place aboard the orbiting International Space Station as the competing teams watched live on screens at the MIT campus while astronauts aboard the station tested the teams’ codes. “The students got to watch the astronauts put the satellites in place floating there at zero gravity, hit the start button and have their codes manipulate the satellites against one another in a virtual arena,” says Mike Lydon, chief technology officer of TopCoder, a competitive software development community that designed the online programming competition with funding from NASA and DARPA, an agency of the U.S. Department of Defense responsible for the development of new technology for military use. “It blew me out of the water – the coolness factor of watching a live feed with the space station and the experience that the kids had getting to see their code running the satellite up on the space station in real zero gravity. And the level of quality of the submissions was incredible.”

“It was kind of stressful being there,” admits Mark LaPointe, 17, and a senior at River Hill High School in Maryland who hopes to study engineering next year in college. LaPointe is a member of Team Rocket, one of three teams that formed the winning “Alliance Rocket” team. In the final round of the competition, participating schools were asked to form alliances and collaborate online on the final code submissions. “We had a good feeling and confidence in our programming, but we agreed that our chance of winning was so unknown. We just had no idea. They ran through quite a few simulations and then when they got to ours, we saw our code execute, and [the satellite] revolved around the asteroids flawlessly.”

For budding engineers like LaPointe, the SPHERES competition takes robotics to a different level, one that deals far more with how robots think than how they move. “Often on a high school level, robotics competitions are mechanical, like the FIRST Robotics competition. Students are building industrial quality machines, not artificial intelligence. Zero Robotics is more into artificial intelligence or the intelligence that you create for the robot’s brain,” notes Elizabeth Mabrey, founder of Storming Robots, an organization in Branchburg, N.J., that builds students’ engineering abilities to prepare them for future competitive markets, especially in engineering fields. Storming Robots was one of the winning Alliance Rocket teams at last week’s competition.

“Being able to try to make a computer that can think is interesting,” says Avery Katko, a home schooled 17-year-old from Long Valley, N.J., and a member of Storming Robots. “I’m particularly interested in linguistics and in artificial intelligence that can make computers communicate using human language.” Katko takes his passion for linguistics to even greater heights as a hobbyist in conlanging, the art of creating entirely new languages.

While most students joined the SPHERES competition because, as Bernards High senior Matthew Goldman puts it, “we thought it would be cool to program robots in space,” the competition has a greater mission. The goal of the program is to build critical engineering skills for students, such as problem solving, design thought process, operations training and team work. Students are not required to have previous programming experience before the project. After a tutorial on how to program the robots, the teams strategize, design and test their coded solutions in a computer simulation environment.

Several of the students mentioned the required online collaboration with other teams in the last round as one of the game’s biggest challenges. Careers in engineering, computer science and space science often demand this type of teamwork – and more. “Incredibly interesting jobs are accessible even starting at the high school level,” notes Lydon. “Mathematics doesn’t have to be about sitting at a desk crunching numbers, and computer science does not have to be sitting at your computer all day building an accounting system.” When you get to a point with math that you don’t have to memorize, you just have to use it, “it makes the work so much more fun,” adds Mabrey.

Using programming concepts like orbital dynamics to navigate a basketball-sized satellite that exists in zero gravity is certainly high tech, agrees LaPointe, and it is also a great way to stay tuned into the world’s latest, greatest technological inventions. “I love math, the sciences, building stuff and programming. It is a ton of fun. It’s cool because you get to work with the most high-tech equipment out there, like processors. Everything new comes in from the high tech, engineering, math and science fields. Seeing the latest developments is where you want to be.”

What is artificial intelligence and why is it important?

What skills can a competition like SPHERES teach you to prepare you for the workplace?

What types of high-tech careers interest you and why?

Do you have a cool story about your own work with robotics design, either hardware or software? Log in to KWHS and share it with other teens in the Comment section of this article.

Ten Ways to Judge a President: Leadership Lessons from History