Spanish sports fans go wild for the game of football – known in the U.S. as soccer – and all its players, from coaches to goalies. The current sidelines superstar is Josep Guardiola, coach of F.C. Barcelona, a Spanish National Football League team with an incredible record. Inherent in Guardiola’s passion for the game and his winning strategies are true lessons in successful leadership. …Read More 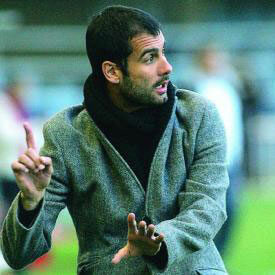 Every Sunday, Diego, a 14-year-old Spanish secondary school student, eagerly awaits the results of La Liga (National Football League). Glued to either the computer screen or the television, he is dying to know whether his favorite football team – known in the U.S. as soccer — has won and also whether his virtual team – created through a game called Comunio – is on top.

Diego has chosen his favorite league stars to create a virtual football team and plays against other teams created by his friends. “In the virtual world I am the manager and trainer,” says Diego “I buy and sell players in the market — where there is an initial price and a market value — and I have an initial fund of 20 million euro,” he adds.

Diego is having fun and at the same time testing his talents as a team trainer, which in Spain refers to the coach of a sports team. However, few people come to be professional trainers, as it is much more difficult in real life than in virtual life to be successful in the highly competitive sports business and manage a group of sports stars, many of who are genuine media phenomena.

This makes having role models to look up to all the more valuable. Many teens in Spain, regardless of the team they support, want to be Josep “Pep” Guardiola. Pep Guardiola is the coach of F.C. Barcelona, the Spanish National Football League team that includes the Argentinean Messi and Spaniards Xavi and Iniesta in its ranks, and the first team in the league to win the triple: the League Championship, the King’s Cup – also a national competition – and the European Champion’s League in the 2008-2009 season. Guardiola, ex-captain of Barcelona, former player in the Spanish national team and a beginner trainer in the Spanish League’s top flight, worked the miracle.

Maintaining a Hunger for Victory

“Success doesn’t come by accident,” says Juan Carlos Cubeiro, director of the Higher School of Coaching in San Pablo-CEU, Madrid and president of the consultancy firm Eurotalent. Cubeiro has studied the leadership qualities of Guardiola so that anyone can apply them to their team, be it in sports or business. About a year ago, he and co-author Leonor Gallardo published the book Liderazgo Guardiola: Cómo lograr que tu equipo sea admirado (Guardiola Leadership: How to get your team to be admired), which is now going into its fifth edition.

Cubeiro suggests that the key to Guardiola’s success lies in his first season in charge of Barcelona, “a success which he has been able to maintain in a sustainable way.” He has proven himself to be loyal to his style even when the results go against him, notes Cubeiro. In his second season he could not repeat the triple, and only won the National League Championship. In this third season, Barcelona is “alive” in two competitions, having lost the King’s Cup, and is the league leader. And throughout this time, he says, Guardiola has overcome the enormous challenge of “maintaining commitment and the hunger for victory, despite having won everything.”

On the other hand, he is an incredibly hard-working individual, carrying out in-depth analyses of his rivals, as well as being balanced from an emotional perspective. In reaction to sports results, “he doesn’t get carried away by euphoria or fall into despair,” says Cubeiro. This is worth highlighting because, as he notes, “over 90% of leadership is emotional intelligence, that is, how emotions are channelled and, in this case, how they are transmitted afterwards to the team.” This doesn’t hide the fact that he plays his role passionately, but when facing the media and the to and fro of competition, “he knows the importance of what he says and how he says it. For this reason, he works hard on transmitting calm.”

The Legend of the Lone Ranger

Guardiola, who was a product of a famous youth football academy and became one of the finest midfielders in the game, is very clear about the idea that it is better to get rid of players who are “toxic” — that is, “who generate a bad environment, which in football accounts for 50% of the success or failure of the team,” Cubeiro says. After taking over the team, Guardiola got rid of prestigious footballers such as the Brazilians Ronaldinho and Deco and, after the triple, the Cameroonian Samuel Eto’o. The latter was a great goal-scorer, but “in football, you don’t judge the performance of a player solely on the basis of his goals, because the important thing is how two or more players connect with each other to score,” he adds.

In other words, the important thing is the group. “After the exit of those players and the incorporation of the Spaniard David Villa, a much more collaborative forward, several goals are being scored by many players, and more opportunities are being given to young players from the youth squad,” says Cubeiro. Moreover, the trainer has surrounded himself with people who complement his competences. This is smart leadership because “the lone ranger is an urban legend. The minimum unit of leadership is a pair.”