On November 14, 2011, Google India announced the winner of its third annual Doodle 4 Google competition for students ages 7 to 15. While few businesses would readily let customers tinker with their corporate logos, Google sees the contest as an extension of its young, fun, quirky brand.…Read More 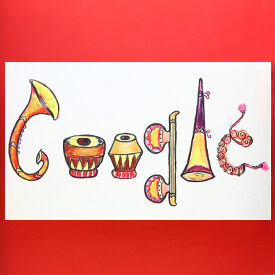 On November 14, 2011 – known in India as Children’s Day, the birthday of the first Indian prime minister, Jawaharlal Nehru — Google’s worldwide homepage ran a doodle of the company’s name spelled out using Indian musical instruments. The variation on the company’s logo was drawn by seven-year-old Varsha Gupta, a grade-3 student at the Ryan International School in Greater Noida, near New Delhi, India. Gupta created the winning doodle in Google India’s third annual Doodle 4 Google competition for school kids, this year themed “India’s Gift to the World.”

The India competition invites students ages 7 to 15 in grades 1 through 10 to create their own depictions of the now-famous Google doodles, which are artistic variations on the companies logo – the Google name — that illustrate holidays, famous birthdays and the like. A company logo is a graphic mark or emblem that companies and organizations use as a way for the public to immediately recognize them – for example, the Nike swoosh.

Google, which says it is committed to bringing technology to young people, runs similar competitions in 21 countries, including the U.S., that are open to K-12 students. Each of the four winners of this year’s Doodle 4 Google’s India competition won a laptop with a free two-year Internet subscription, while the school of the top winner also gets a Rs.200,000 (US$4,000) grant to buy computers or Internet subscriptions. Prize winners in the U.S. contests take home a computer, a $15,000 college scholarship and a $25,000 technology grant for their schools. Seven-year-old Matteo Lopez’s doodle titled “Space Life” won the latest U.S. contest this past May.

Companies try all the time to be relevant and useful to their audiences. Google sees its Doodle 4 Google contests as a way to communicate its fun corporate culture to the youth in India and around the world. “Google’s credo is to ‘organize the world’s information and make it universally accessible and useful,’” says Nikhil Rungta, the head of Google India’s marketing. “We are also a company that is a lot of fun and believes in innovation and quirkiness. This competition allows these young kids to showcase their innovation for arts, culture, science, etc.”

Few companies would readily let customers tinker with their logos, but Google has a bolder view here: “A brand is not what you make of it, but what people make of it,” says Rungta. “We play around with our logo. We don’t think the logo is sacrosanct,” adds Paroma Chowdhury, who heads Google India’s corporate communications. “It is part of the Google philosophy of being a young brand that celebrates [connecting with the consumer] and making stuff on the fly.”

The contest drew 155,000 entries, among the highest for any Doodle 4 Google competition so far. While Google’s master doodler Dennis Hwang and illustrator Jennifer Hom picked Gupta’s entry from the semifinalists, an online public vote selected three other winners across different age groups. Participants drew doodles with sub-themes like “The World is One Family” and “India My Country.”

Of Arts and Architecture

Winning the Doodle 4 Google contest has re-energized Gupta’s dream to become an aeronautical engineer. Gupta discovered this passion through a NASA student exchange program at her school, and now has a renewed confidence in all her future endeavors. “I feel I can draw anything,” says Gupta, after being named the winner. Her grandmother, Lalit Kumari Gupta, a music and arts teacher, inspired her Google design.

Fifteen-year-old Nishi Bordia, a 10th grade student at The Emerald Heights International School in Indore and one of this year’s group winners, also hopes to capitalize on her winning creativity. “I will go into the arts field, and I’m thinking about architecture,” she says. Her doodle presents images of yoga, ayurveda, mathematics, astronomy and chess, among other things, as India’s contributions to the world.

Winning India’s Doodle 4 Google contest in 2010 helped 15-year-old Akshay Raj decide that he wants to become an architect. Raj, now in the 10th grade at St. Aloysius High School in Mangalore, feels Google is “both serious and fun.” His winning doodle was themed around what India will be like in 2030.

Google first began to doodle with its logo in 1998, when founders Larry Page and Sergey Brin adorned the image to indicate their attendance at the Burning Man festival in the Nevada desert. Since then, it has occasionally run creative variants of its original logo to mark scientific and artistic achievements, a historic event or birthdays of pioneers such as guitar legend Les Paul.

At the same time, Google’s doodles don’t challenge the authenticity of a corporate logo — something that consumers often identify with. The Google name is still clearly displayed. “If [the logo] is simple, you see it quickly and you get it — you are not trying to make sense of several different ideas at once,” said Tony Spaeth, president of Rye, N.Y.-based brand consulting firm Identity Works in a recent Knowledge@Wharton story on Starbucks’ plan to change its logo.

Google India’s Rungta says that the Doodle 4 Google contest is a great way to connect with consumers. “It’s just our love for technology and science. It’s more cultural than corporate-corporate and more about who we are as a brand.”

What is Doodle 4 Google and how does it represent Google’s brand and culture?

Research winners of this contest in the links below. What common themes emerge?

The article above says that “Companies try all the time to be relevant and useful to their audiences.” What does this mean? How does social media help companies achieve this objective?